The Jedi Jolt: The Science Of Why We Get Goosebumps & Chills When We Watch A New “Star Wars” Trailer

When the final STAR WARS: The Force Awakens trailer was released yesterday it sparked a major global disruption in The Force — the Internet force, that is. As Deadline Hollywood reports, “The sudden rush of demand from Jedi-happy fans has caused loading issues and site outages on purchasing platforms including Fandango, the Alamo Drafthouse, and AMC Theaters. Fandango was most seriously affected as of this writing, with the site timing out before the home page loads when we attempted to access it.” But for millions of STAR WARS fans yesterday, the trailer sparked a very different kind of Force altogether — an internal one which causes two of the best physiological symptoms of all: goosebumps and chills.

Goosebumps and chills are two ancient reactions inherited from our very hairy Chewbacca-like ancestors — reflexes that are activated by the sympathetic nervous system (SNS) which is responsible for many fight-or-flight responses. Whenever our ancestors were threatened or experienced cold, the SNS would flood the blood with the stress hormone adrenaline (epinephrine) which is made in two bean-like glands that sit atop the kidneys. The adrenaline boosts the heart rate, metabolism, and body temperature, and causes the muscles around the base of each hair to contract, making each hair stand upright (this is known as arasing, piloerection, or the pilomotor reflex, with perhaps the most prominent example being a porcupine’s raised quills). The upright hair has two functions: 1) to create the illusion of a larger body frame which helps to ward off attackers, and 2) the erect hair traps extra air and creates a temporary protective layer of insulation to keep hairy animals warm during cold snaps and cold wind gusts (the muscle tension around each hair follicle also provides an extra layer of warmth as well).

But for us modern, nearly hairless humans, threats to the our survival are comparatively nonexistent, and our experience with pilorection goosebumps and sympathetic nerve chills now occurs most often during states of intense positive emotions instead of neagative ones, such as awe, nostalgia, pleasure, euphoria, and sexual arousal (although let’s not leave out the nails-on-chalkboard reaction). The effect can even be triggered by strong memories. Goosebumps themselves are strongest on the forearms, but also occur on the neck, legs, and other areas of the skin with hair. Some even experience them on the face and head.

STAR WARS: The Force Awakens opens in theatres worldwide on December 18, 2015. Experts are predicting a record-smashing global box office opening of $615 million in the first four days of its release. You can enter the mothership at STARWARS.com.

SEE ALSO: George Lucas Dedicating Majority Of $4 Billion Sale Of LUCASFILM To Education
SEE ALSO: Get A Sneak Peek At Mindblowing New Book Showcasing “Star Wars” Sets & Props Blueprints
SEE ALSO: George Lucas Based Character Of Darth Vader On His Troubled Relationship With His Father
SEE ALSO: The Great Work of Your Life: Stephen Cope’s Extraordinary Guide For The Journey To Your True Calling
SEE ALSO: George Lucas Talks To Charlie Rose About Religion & The Psychological Motifs Embedded In “STAR WARS”
SEE ALSO: Adidas Unveils Their New STAR WARS Line Of Sneakers Which You Can Customize To Your Heart’s Content 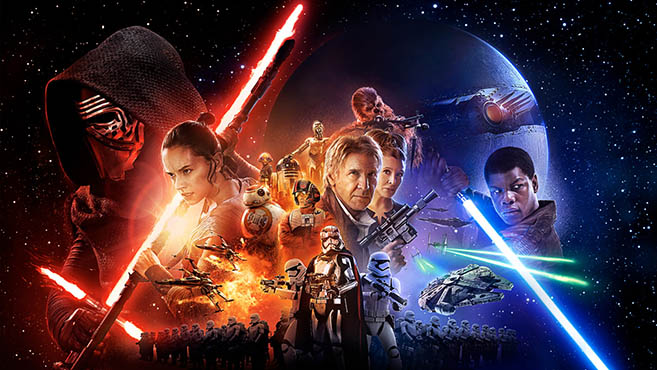