There are some fascinating seismic shifts taking place in the old K-12 educational system these days.  People have woken up and realized that this outdated model that we’ve relied on for so many decades is quite simply out of date, and in some cases may be doing more harm than good to millions of children in their early development.

I have a few personal favorite insights into how our educational system needs to be improved, one of which comes from legendary architect Frank Lloyd Wright.  In a 1957 interview Wright delivers an eloquent critique of the most fundmental flaw in the system: how education has not provided our children with enligtenment — it has only provided conditioning.  Our children, Wright argues, are not being given the proper tools to look inside the deepest nature of things, and he describes how children are taught to look “at” problems instead of looking “in”.  And in the same post from January 2012 I also raved about bestselling author Daniel Pink‘s thesis that right-brained creative thinkers will inherit the world, as well as a fascinating perspective from Jon Freach who wrote a brilliant essay for The Atlantic where he argues that school boards have to start thinking beyond the sciences and the humanities, and incorporate design into the curriculum.  You can learn more about all three of these insights here: “Beyond Sciences And The Humanities: Why Design Must Become The 3rd Pillar Of K-12 Education“.

This past March I was also blown away by a 60 Minutes profile of Sal Khan, a young thirtysomething engineer on the west coast who was making online videos in order to help his niece on the east coast as she was having a lot of trouble with her studies, particularly math.  Sal developed an entire series of incredibly helpful videos that helped reduce these impenetrably difficult problems into easy-to-understand portions.  Those videos have since caught the attention of Bill Gates, and have gone on to become The Khan Academy — a powerful new dimension in education that is transforming and democratizing the learning process for millions of kids around the world.  This story is so amazing it almost brought me to tears: “’60 Minutes’ Profiles 35-Year-Old Sal Khan: Google’s & Bill Gates’ Hero (And Future) Of Education“.

Last night VANITY FAIR posted a terrific piece written by A.A. Gill entitled “The Parenting Trap“.  Gill’s bang-on feature essay makes the case for forgetting all the advice.  Forget the special tutors, camps, coaches, and therapists — Gill, a father of four, argues that the biggest problem kids face is the byzantine education-industrial complex known as school, which ruins the most carefree and memorable years of their lives.  Gill writes, “The interesting adults are always the school failures, the weird ones, the losers, the malcontents. This isn’t wishful thinking. It’s the rule.”  You can read the entire piece by visiting VANITYFAIR.com.

And then there is creativity expert Ken Robinson, whose TED Talk went viral within hours of it being uploaded online.  If you have not yet watched this brilliant speech then you are in for an incredible 20 minutes that you will never forget.  In the video, Robinson challenges the way we’re educating our children, and he champions a radical rethink of our school systems — one which cultivatew creativity and acknowledges multiple types of intelligence.  You can watch it in full below.

Adding to this growing list of powerful gamechangers in education is none other than the master of the STAR WARS universe himself, Mr. George Lucas.  Last week Lucas announced he was selling LUCASFILM to Disney for a whopping $4.05 billion and dedicating the majority of that money towards the improvement of education.  As Liz Dwyer of GOOD writes, “Lucas’ commitment to education is nothing new. Over 20 years ago Lucas established the George Lucas Educational Foundation, which is dedicated to improving the K-12 learning process by documenting, disseminating, and advocating for innovative, replicable, and evidence-based strategies that prepare students to thrive in their future education, careers, and adult lives.  In part, the foundation runs the nonprofit website Edutopia, which produces the excellent profiles of innovative, effective schools in their Schools That Work series.”

In 2010 when Lucas signed on to Bill Gates’ and Warren Buffett’s The Giving Pledge (an effort to invite the world’s wealthiest individuals and families to commit to donating the majority of their wealth to philanthropy) he released the statment declaring that he was “dedicating the majority of my wealth to improving education [because] it is the key to the survival of the human race … We have to plan for our collective future — and the first step begins with the social, emotional, and intellectual tools we provide to our children.”

I cannot wait to see all the amazing things George is going to do with this new initiative in the coming years.  A truly amazing man, and my newest FEELguide Hero. 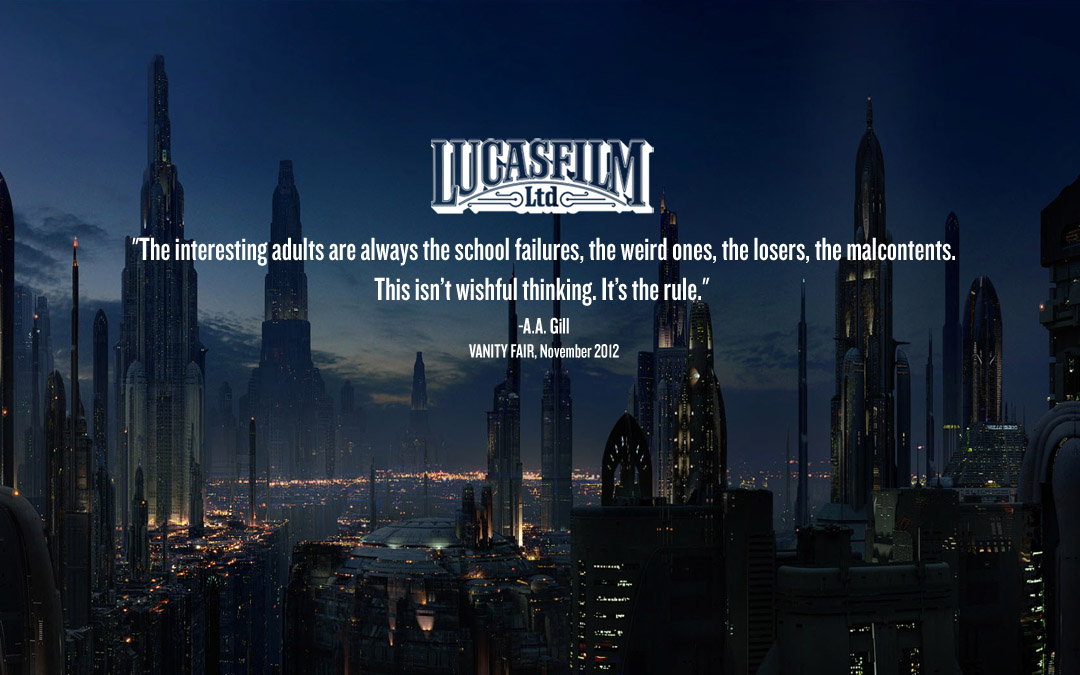