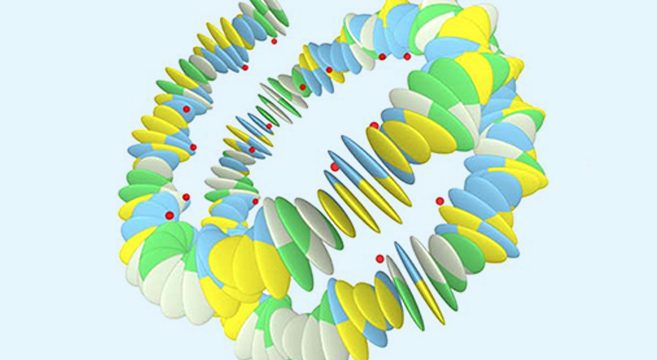 The WOW Files: Scientists Confirm A Second Layer Of Information Has Been Found Hiding Inside DNA

Scientists at the Leiden Institute of Physics have confirmed a discovery that will rewrite the books on DNA. Ever since Watson and Crick identified the structure of DNA molecules in 1953, scientists have assumed that the only information contained within each strand is the various combos of G, A, T and C inside the iconic double helix structure. But today’s announcement confirms what scientists have suspected since the 1980s — there is a secret “hidden” code found inside the specific way each DNA molecule is wrapped up and folded.

Each cell in existence contains 4-feet (2m) of DNA. And as Eric Arends of PHYS.org writes: “Each cell contains the exact same letter sequence, and yet every organ behaves differently. How is this possible? … The way in which DNA is folded determines how the letters are read out, and therefore which proteins are actually made. In each organ, only relevant parts of the genetic information are read. The theory suggests that mechanical cues within the DNA structures determine how preferentially DNA folds.”

To learn more about this incredible discovery you can read the full study at PLOS.org. And before you read the technical details of how the team unlocked this mystery, here’s some food for thought from the folks at KQED: “Each human cell has around 6 feet of DNA. Let’s say each human has around 10 trillion cells (this is actually a low ball estimate). This would mean that each person has around 60 trillion feet or around 10 billion miles of DNA inside of them. The Earth is about 93 million miles away from the sun. So your DNA could stretch to the sun and back 61 times. That is one person’s DNA.” For all FEELguide stories related to DNA be sure to visit DNA on FEELguide.

FIG. 1 (via PLOS.org): Nucleosomal DNA model with bp step dependent mechanical properties.
(A) The rigid base-pair model is forced, using 28 constraints (indicated by red spheres), into a lefthanded superhelical path that mimics the DNA conformation in the nucleosome crystal structure [4]. (B) Fraction of dinucleotides GC and AA/TT/TA at each position along the nucleosome model found in 10 million high affinity sequences produced by MMC at 100 K. The solid and dashed lines indicate minor and major groove bending sites; the nucleosome dyad is at 0 bp. The model recovers the basic nucleosome positioning rules [1, 3]. (C) Same as (B), but on top of 1200 coding sequences (produced by sMMC). The same periodic signals are found albeit with a smaller amplitude (Multiplexing Genetic and Nucleosome Positioning Codes: A Computational Approach; image credit: Behrouz Eslami-Mossallam Raoul D. Schram Marco Tompitak John van Noort Helmut Schiessel)
.

Previous post:
Microsoft Data Researchers Can Identify Pancreatic Cancer In People Based On Search Engine Queries Next Post:
Powerful 5-Minute Animated Video Explains The Three Factors That Determine Your Level Of Self Esteem