Slate On Why The Globes Are Better Than The Oscars: “Where Entertainers Are Rewarded For Being Entertaining”

First published in SLATE (January 13, 2012) by Tom Shone  ☛  Imagine a world in which most of the cosmic injustices perpetuated by the Academy of Motion Picture Arts and Sciences did not take place. I know it’s hard, with the wound of of The King’s Speech’s victory over The Social Network so fresh [FEELguide NOTE: I still get steam coming out of my ears when I think about Harvey Weinstein’s media influence and the role it played in getting his ‘King’s Speech’ the Oscar — ‘The Social Network’ was light years ahead of that film with regards to artistic merit and message], but imagine a world in which Fincher’s film had been victorious—a world where Brokeback Mountain did not lose out to Crash, and E.T. beat out Ghandi; where Chinatown won best film, and Coppola won best director for Apocalypse Now.  Oh, and while we’re at it, an armful of trophies for Some Like Hot and a little something for Alfred Hitchcock. 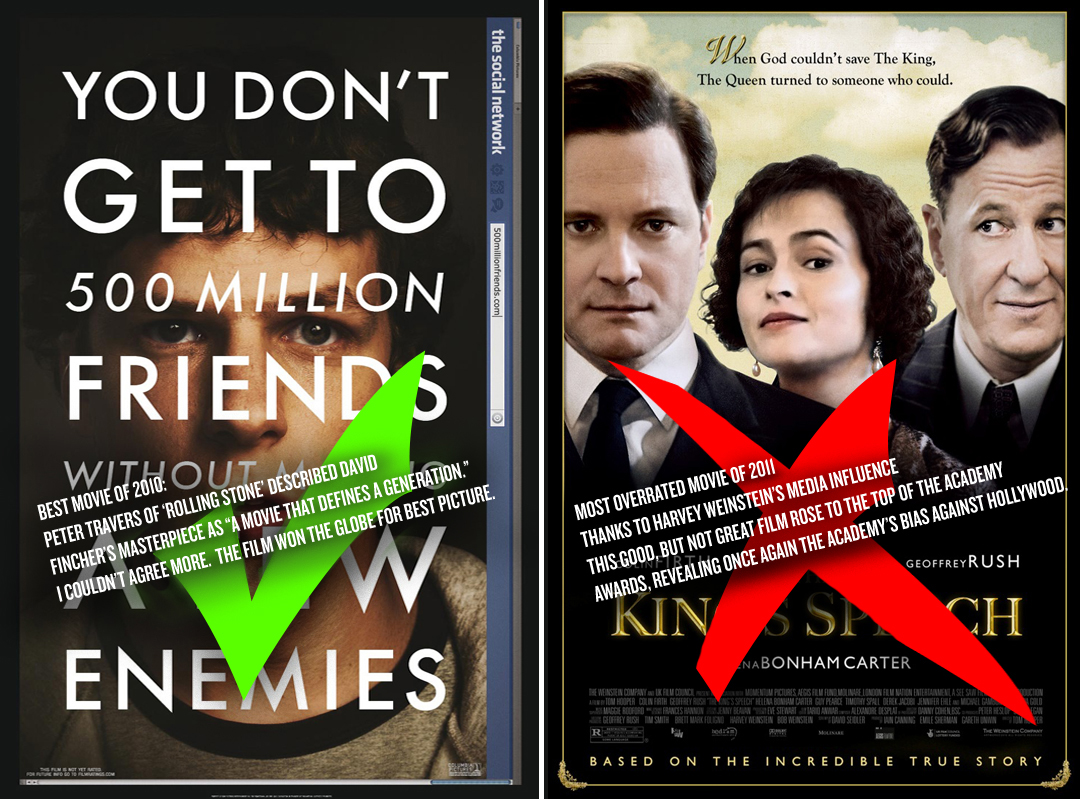 Before someone objects on the grounds of cruelty, let me reassure you: This fragrant arcadia exists.  It is the world as reflected back to us in those big shiny iridescent orbs, The Golden Globes.  I’ve never understood the vilification rained down on the Globes every year: “the entertainment industry’s dirty little secret,” “just a group of whores from other countries,” “a non-event raised to epic proportions by Dick Clark getting them a network television slot,” “a scam that would make Bernie Madoff blush.”  Agreed, the organization comprises a deeply suspect cabal of just 88 foreign “journalists” writing for such illustrious journals as Malaysia’s Galaxie magazine and Australia’s FilmInk, who appear to dish out nominations on the basis of which star can be persuaded to get drunk with them on awards night, in return for a boost for their Oscar chances.  So the Globes are venal and easily corrupted, and the voters wish for nothing more than to get drunk with Sharon Stone: so, too, do half my friends.

The scandal is not that the Golden Globes are handed out by a bunch of star-struck foreign hacks with lucrative sidelines in the world of hairdressing and personal fitness; the real scandal is that a bunch of star-struck foreign hacks make aesthetic choices that are consistently the equal of, if not better than, those of the 6,000 members of the Academy of Motion Picture Arts and Sciences. They (rightly) gave best director to Francis Ford Coppola for Apocalypse Now rather than Robert Benton for Kramer vs. Kramer. They went for Tom Hanks when he was still funny, in Big, long before everyone came down with a case of the Gumps. And they were the only major awards group to spot Marilyn Monroe’s gifts as a comedienne, giving her best actress for her performance in Some Like It Hot, a film which won an armful of Globes but limped away from the Academy Awards with just a single lousy Oscar: best costume. 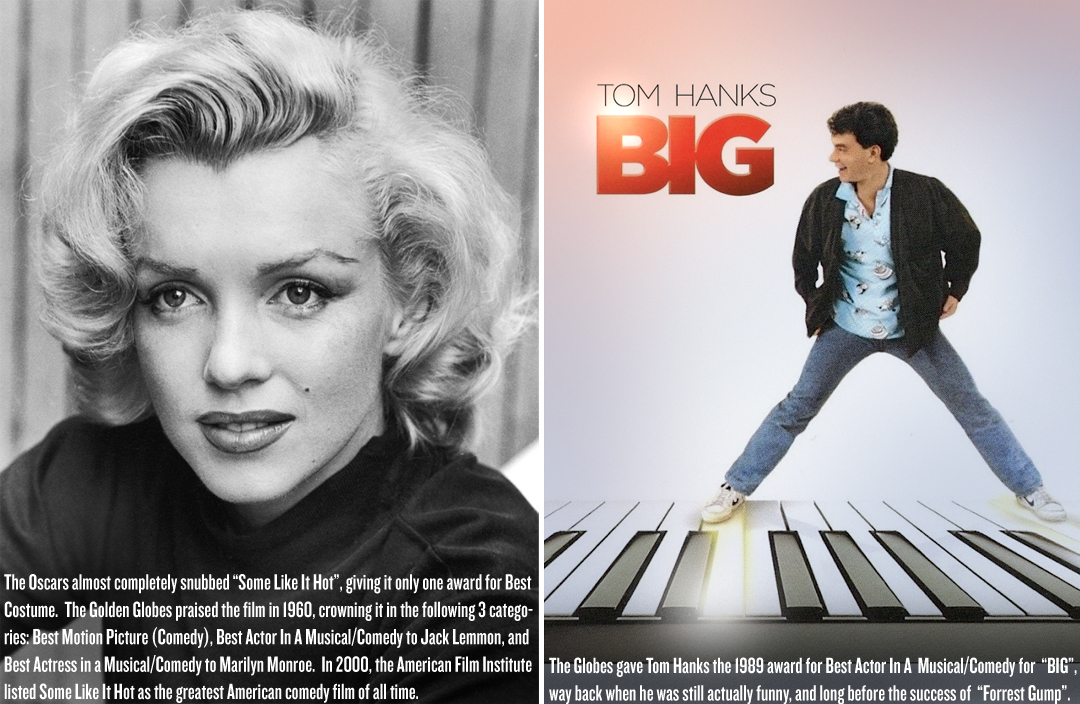 Actually, what they gave Monroe was “Best Actress in a Motion Picture (Comedy or Musical),” not the sweetest of endearments, but one pointing to the single most important reason why the Globes taste profile feels so supple when compared to that of the fusty old academy: They recognize comedy. The Oscars, on the other hand, are the place the entertainment industry goes to be reassured that it is not just in the business of entertainment. For 364 days of the year the good citizens of Hollywood graze elbows and knees in their efforts to put bums on cinema seats. Then, come January, they clutch their foreheads, stare into the middle distance, and attempt to divine whether the anti-racism tract playing on their flat-screen TVs is, in fact, art — a vague and amorphous term that strikes terror in the heart of the average studio executive. The Oscars are first and foremost designed to alleviate that terror.  The question the awards are concerned with is not “what film marks the greatest artistic effort?” but “which film can best be defense against the charge of philistinism?”  Hence their nose for films garlanded with extracurricular socio-political-humanitarian importance—Ghandi, Platoon, Dances With Wolves, A Beautiful Mind, Crash — designed to make Hollywood feel good about itself for one night, but which everybody else forgets almost instantaneously.

Spend some time with the list of Golden Globes winners for best musical or comedy — a list which includes The Apartment, The Graduate, M.A.S.H., Tootsie, Prizzi’s Honor, Hannah and Her Sisters, Working Girl, The Player, Toy Story 2, Almost Famous, Sideways, Vicky Christina Barcelona, Lost in Translation—and it reads suspiciously like the list of films we will actually be watching in 50 years’ time, once Crash is but a distant blip in our rear view mirrors.

Of course, the Globes do not completely sidestep the marsh of the middlebrow. They preferred Love Story to Patton and Gigi to Vertigo. Notoriously, they named Pia Zadora newcomer of the year after her husband showered the HFPA with lavish parties. They nominated Sharon Stone in The Muse after her representative plied them with 84 gold watches. And in 2009 they nominated The Tourist for best motion picture, actor, and actress seemingly out of nothing more than an intense desire to clap eyes on the sinuous forms of Johnny Depp and Angelina Jolie hopping tables.

“The Golden Globes are not taken seriously as artistic milestones and have a history of voting idiosyncrasies,” noted the New York Times recently. “The group tends to nominate based on star wattage instead of performance in an effort to orchestrate a red-carpet spectacle.” As opposed to the rest of us, who like to take in Bresson films with the bed sheets tucked into our armpits, sucking on a lemon. I would put this the other way around: It is in the warmth of the welcome they give movie stars that the Globes give the slip to the insincere self-admonishments of the Academy and score their deepest consonance with the viewing habits of actual live human beings. They do not worship at the altar of Star Uglification. They do not give awards to anyone found within a 20-mile radius of a fictional concentration camp. While the academy was going bonkers for Roberto Benigni, the Globes handed best actor to Jim Carrey for The Truman Show. Nor are they in the lifetime achievement business. In 1999, while the academy was waxing nostalgic with Michael Caine in The Cider House Rules, the Globes were too busy being electrified by Tom Cruise in Magnolia. 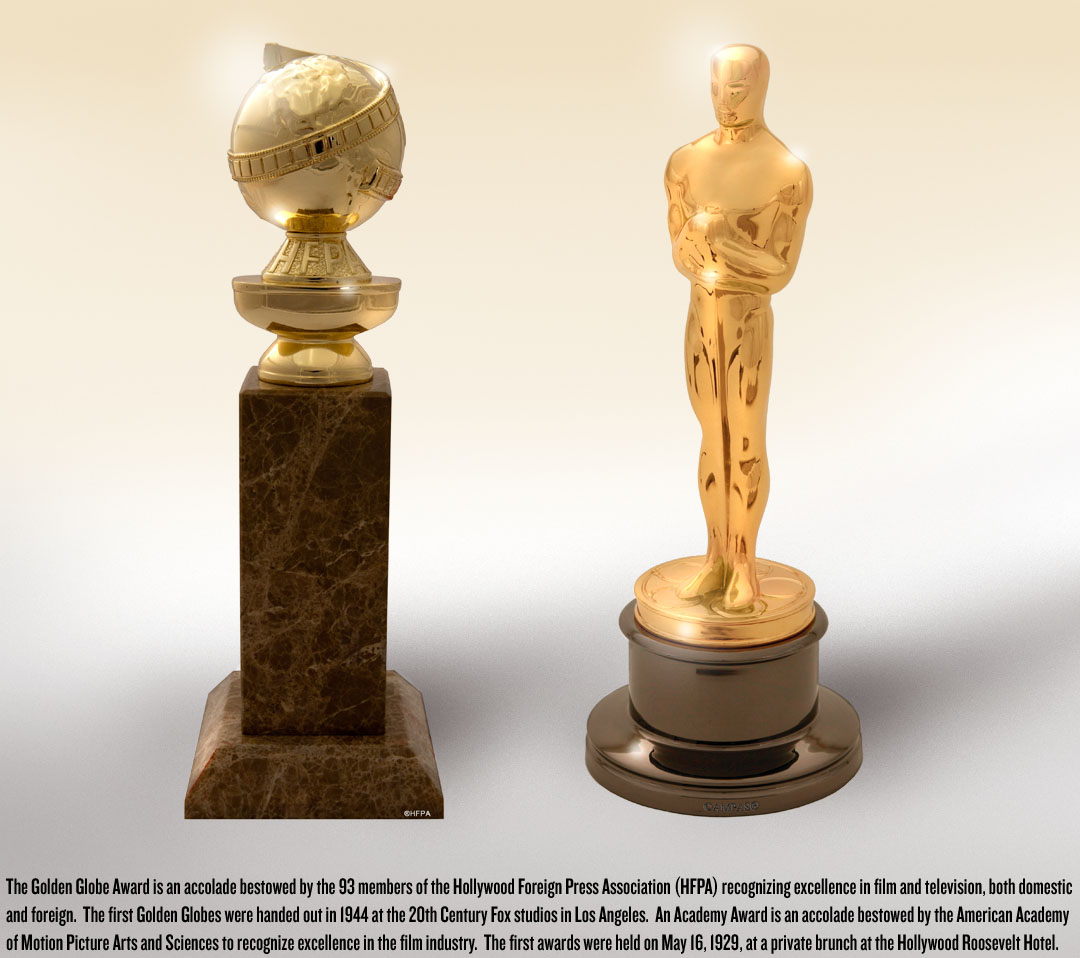 In other words: The Globes recognize stars quicker and earlier, while they still have some life in them. In 1995, while the academy was coming over all mopey with Susan Sarandon for her part in the turgid death-row drama Dead Man Walking, the globes went to Sharon Stone for her part in Casino and Nicole Kidman for her frisky, star-making turn in To Die For—long before she donned a fake nose to win the Oscar. The list of performances rewarded at the Globes but not the Oscars goes on—Melanie Griffith in Working Girl, Julia Roberts in Pretty Woman, John Travolta in Get Shorty, Cruise in Jerry Maguire, George Clooney in Oh Brother, Where Art Thou?, Gene Hackman in The Royal Tenenbaums, Bill Murray in Lost in Translation, Sasha Baron Cohen in Borat, Meryl Streep in The Devil Wears Prada …

It reads like a list from an alternate universe, where entertainers are rewarded for being, you know, entertaining. If the academy is serious about its search for younger viewers, I would suggest they take a leaf out of the Globes book, and: 1) supply more alcohol. Watching George Clooney get up and be witty on a couple of glasses of scotch is almost exactly what Hollywood should be about.  2) Loosen the fatwa against comedy and comic performances.  And, 3) don’t punish stars for “being themselves.” It’s a rarer gift than mere acting. Bill Murray has won a Golden Globe. He has never been nominated for an Oscar.  I rest my case.

Some Like It Hot (1959) wins the Golden Globes for best motion picture (musical or comedy), best actor (Jack Lemmon), and best actress in a musical or comedy. At the Oscars it wins only best costume.

Peter O’Toole wins the best actor (Drama) for his role in Beckett (1964) and subsequently wins three more Golden Globes. Despite being nominated for an Academy Awards eight times he wins none, necessitating an honorary Oscar in 2003.

Al Pacino wins best actor for his performance in Serpico (1973). The best actor Oscar that year goes to Jack Lemmon for Save the Tiger.

E.T. (1982) wins best motion picture (drama). The best picture Oscar, like much else that year, goes to Ghandi.

Tom Hanks wins best actor in a comedy or musical for his performances in Big (1988). At the Oscars, Dustin Hoffman wins Best Actor for Rain Man.

Jim Carrey wins best actor in a drama for The Truman Show (1998). That year, the best actor Oscar goes to Roberto Benigni for Life Is Beautiful.

The Social Network (2010) wins best motion picture (drama), best director, and best screenplay. At the Oscars it loses best film and director to The King’s Speech.

For more great reads such as this be sure to visit Slate.com as well as follow them on Facebook and Twitter.  The Golden Globes air tonight at 8pm EST on NBC and CTV.  You can read the full list of nominations by visiting GoldenGlobes.org. 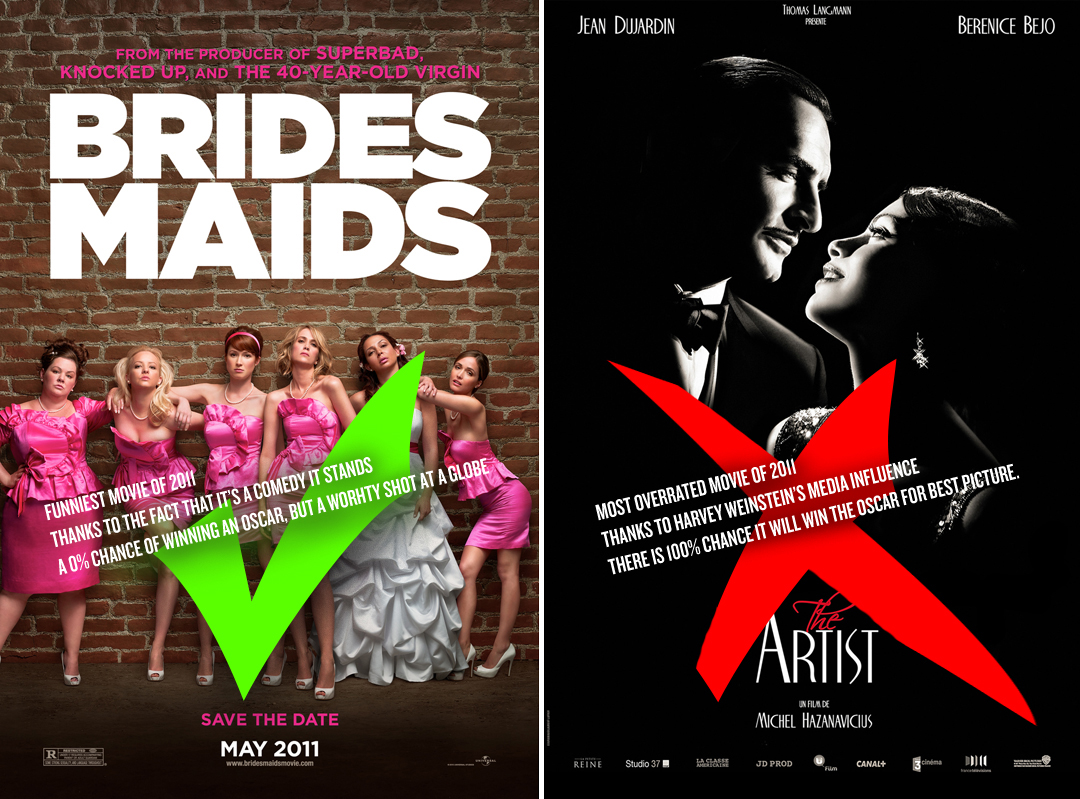