Just before Christmas I re-posted an article I had originally written exactly one year prior (The Incredible History Of The Santa Claus Myth: From Prostitution To Magic Arctic Mushrooms).  Not only is it one of the most exhaustively researched pieces I’ve ever written for FEELguide, it has also become one of my personal favorites (which is why I plan on re-posting it each and every Christmas Eve from now on).  Perhaps my second most favorite seasonal “re-posters” is the one you are about to read which chronicles the true story of Judy Solomon, the woman who is in charge of the Hollywood Foreign Press’ seating plan for the Golden Globes.  The only difference is that this piece requires a yearly revision of one small detail: last year Judy was in the tail end of her 70s, but this year she kicks of her 80th year on this big Blue Globe we call planet Earth, as well as her 56th year as one of the top organizers of the big glamour ball we call the Golden Globes.  The following is the story of the most fawned-over and woman in Hollywood during this time of the year.  There’s also a very good chance no one in Tinsletown encounters more sycophantic ass-kissing than she does in the months of December and January.

First published in The Daily Beast on January 10, 2011 by Nicole LaPorte  ☛  Not many people in Hollywood are fearless enough to take on the town’s all-powerful talent agents and tell them “No.” But that’s exactly what Judy Solomon did last week, when she informed CAA, William Morris Endeavor Entertainment, and the other major agencies, that they would not be receiving tickets to this Sunday’s Golden Globe Awards ceremony.  The news has not gone over well, to say the least. But Solomon, a petite, 80-year-old Israeli journalist who wears Jackie O-style suits, chain-smokes skinny foreign cigarettes, and sprinkles her sentences with the word “darling,” is non-plussed.  “So you have some agents who think that they’re stars, what can you do?” Ms. Solomon, who is the Globes’ arbiter of seating, said in a telephone interview. 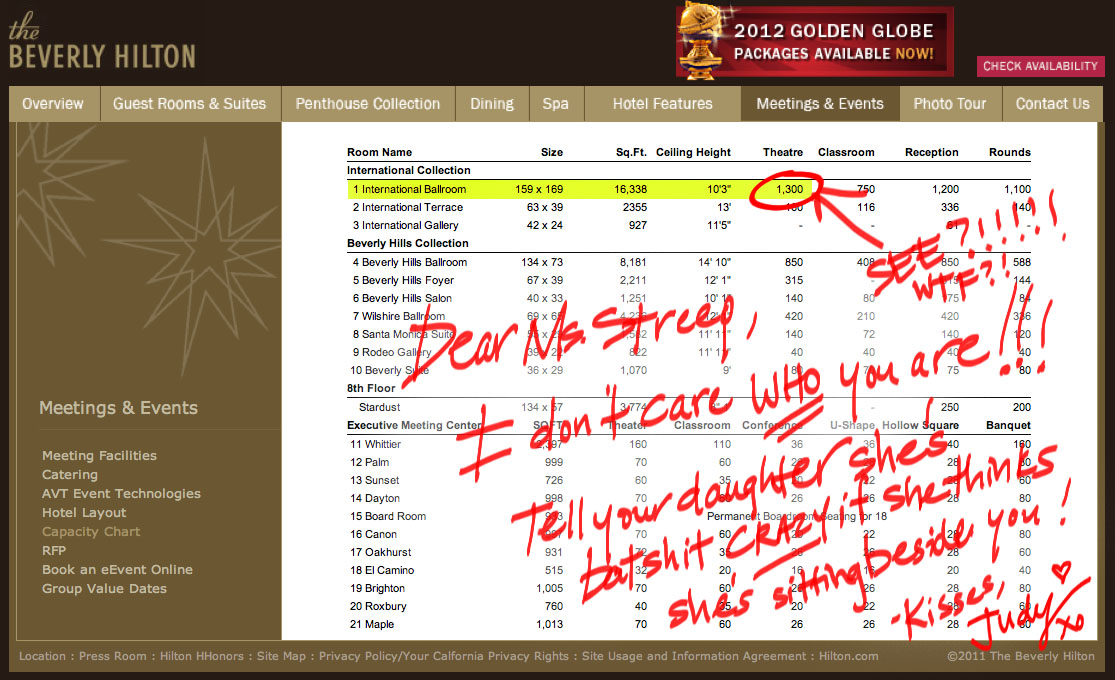 One can be forgiven for not knowing who, exactly, Solomon is.  A 56-year-member of the Hollywood Foreign Press Association (the group of eccentric, international journalists that throws the Globes) most of the year, she is just another anonymous, ink-stained wretch. But come December, she transforms from press junket junkie to all-powerful mistress of ceremonies. She is Hollywood’s own Diana Vreeland-esque social secretary—but with even more influence, seeing as the HFPA operates according to its own quixotic rules. For the Globes ceremony, whose raucous party atmosphere makes it one of the most sought-after invites of the season, the seating battle is particularly ugly. Space is just one issue—the Globes are held in a modest-sized ballroom in the Beverly Hilton Hotel. But obtaining tickets from the HFPA is, according to numerous sources, almost always a grueling negotiation process, in which so-called “talent” is the currency to be bartered.  At the center of this frenetic dance is Solomon, whose day job is writing about celebrities for the Israeli magazine Woman’s World.

“Any other day of the week, you would look at her and be like, What? But yet, with the lipstick, in the ‘60’s Chanel suit, she’s the woman. She’s the gal,” said one publicist. “Everyone’s like, ‘Judy, honey, baby, darling…’”Not that Solomon thinks of herself in such grandiose terms.

To read the list of this year’s 69th annual Golden Globe Award nominations CLICK HERE.  The broadcast airs this coming Sunday January 15th at 8pm EST on NBC and CTV.  Now, sit back and enjoy last year’s now infamous opening monologue which served as part of the reason host Ricky Gervais was banned from ever returning to host the show again.  Inversely, it’s also the very same monologue that generated so much press it’s how he successfully managed to get rehired several months later to host this year’s upcoming show.  Once again, advertising revenue proves to be the number one bottom line.  Gervais’ highly anticipated opener and hosting duties are reason enough in their own right to tune in this Sunday night LOL!