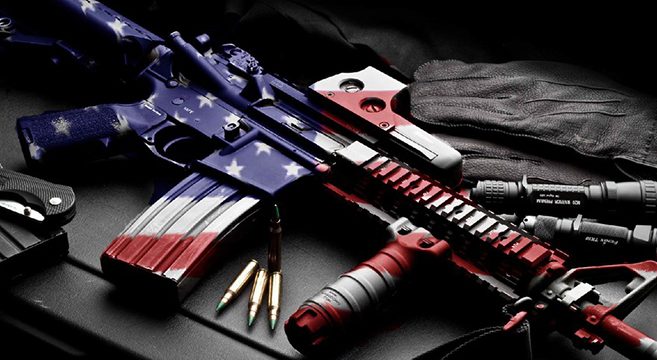 Each time another gun massacre occurs in America, the country’s best known satire publication, The Onion, is forced to update the copy of their all too familiar article entitled ‘No Way To Prevent This,’ Says Only Nation Where This Regularly Happens. As my friend Jason Kaddatz writes, “There are only two things sadder than watching this same Onion post get recycled: the first is knowing that the poor staff have to keep increasing the number of people killed instead of just changing the date and location; the second is reading the ‘Well what can u do about it? This happens everywhere’ comments. As a hunter, I can safely say nobody needs a gun that goes rat-a-tat-tat-tat-tat-tat-tat-tat-tat.”

When Stephen Paddock fired on a crowd of concertgoers from his Las Vegas high-rise hotel room on the night of Sunday, October 1, 2017, he took 59 innocent lives, and left another 527 people injured. He also triggered the latest wave of examples of Republican moral bankruptcy with regards to gun laws. “Now’s not the time to talk about changing gun laws,” is the phrase repeated most often by Republican lawmakers and White House officials since the Vegas massacre occurred. “This is a time for mourning and prayer, not lecturing.” But as Connecticut Senator Chris Murphy, who was there in the aftermath of the Sandy Hook massacre, so wisely pointed out to Rachel Maddow last night (VIDEO #2):
.

“If we aren’t talking about policy change the day after a mass shooting in this country, then you are never talking about policy change because a mass shooting happens, on average, everyday.” He adds, “When you are within hours of one of these incidents happening, the instinct is to be focused on compassion. But compassion comes in a lot of different forms. When a murder happens, the police don’t wait 24 or 48 hours to try to solve the crime and hold someone accountable, and we shouldn’t wait, because the responsibility for this epidemic of mass executions lies with policy makers … these weapons should not be legal.”

.
So if you are a Republican lawmaker, chances are you’re concerned about two things and two things only: money and power. In the context of money, it’s worth pointing out Mother Jones‘ terrific piece which discovered that the yearly cost of gun violence in America comes to $229 billion. That’s almost the same amount as the annual cost of Medicaid (VIDEO #3).

The second thing a Republican leader is most obsessed with is power. And that’s why today is such an enormously consequential day. Earlier this morning the Supreme Court began hearing arguments in the Wisconsin gerrymandering case (VIDEOS #4-5). Gerrymandering being the nefarious electoral map-contorting trick used for years by Republicans to disproportionately scoop up more votes. Just one small example: had two state borders been drawn just a little bit differently, shifting a total of four counties from one state to another, Hillary Clinton would have won the election.

And if there’s one thing a Republican politician is more afraid of than not getting that $10,000 campaign cheque from the NRA, it’s losing their seat because of a gerrymandered voting block of gun supporters in their district getting pissed if that politician ever dares to support gun legislation. If those contorted maps are proven to be illegal by the Supreme Court, we will finally begin to see these much needed gun laws become a reality. Watch below as Morning Joe talks to Peggy Noonan about the issue (VIDEO #1). One reason there might be hope came from Mother Jones reporting just after noon Eastern on Tuesday, October 3: “Justice Anthony Kennedy, the court’s key swing vote, gave the impression that he was looking for a way to invalidate Wisconsin’s maps and possibly set an important precedent against this type of gerrymandering.” (Image via Odyssey)
.

Peggy Noonan joins a wide-ranging discussion in the aftermath of the Las Vegas massacre about gun reform, problems that can be managed and not solved, and what drives people to buy high-powered guns.

Murphy pushes Congress on guns as US suffers another gun massacre

Senator Chris Murphy talks with Rachel Maddow about resistance in Congress to doing anything to prevent any future gun massacre in the United States and where he sees the possibility of progress on gun restriction legislation.