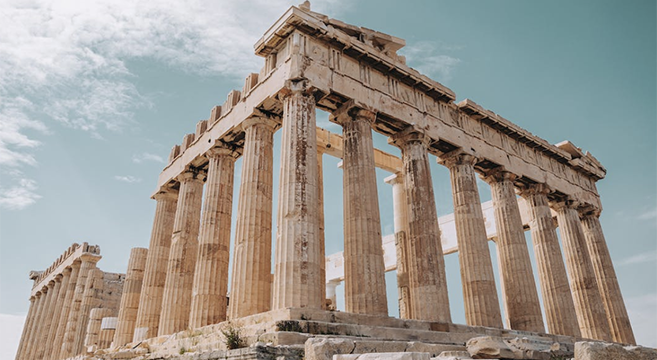 All You Need To Know About The Ancient Greek Ruins

The majority of the characteristics that we often associate with Greece, particularly the one of being the birthplace of democracy, really belong to its stunning capital, Athens. The city has been inhabited for millennia and has seen several stages and alterations. It is now the most populated city in Greece, has a university, and still has a vibrant cultural scene today, just as it had in the fifth century BC. Without a doubt, the ruins of ancient Greece are a must-see, and here are some details that you should know!

The original name of Athens was Aktaio, in reminiscence of its first king, Aktaios. According to legend, Athena and the sea deity Poseidon competed to name this city. Poseidon drove his trident into the rock, causing a spring to erupt, while Athena poked the ground with her spear, causing an olive tree to sprout. Since its people found the first olive tree in human history to be far more beneficial to them than Poseidon’s source of salt water, Athena was proclaimed a victor, and many structures were constructed in her name. Therefore, the hill known as Acropolis is 150 meters above sea level and is home to an old archaeological complex. It is also protected by UNESCO and was initially inhabited roughly 6000 years ago.

Today, this old temple of the gods rises erect over contemporary Athens. There are four buildings there: The Parthenon is the best-preserved example of Doric architecture, followed by the Erechtheon, an Ionic temple, the Propylaea, the Acropolis’ main entrance, and the Temple of Athena the Victorious. Of course, the most well-known structure on the Acropolis is the Parthenon, which was constructed in the 5th century BC as the goddess Athena’s temple. The temple’s enormous Doric columns and amazing carvings give it a unique air of mystique and strength. So when you travel there, you will undoubtedly visit it first. Since everyone who comes to Greece is eager to visit this place first, there are often crowds. Nevertheless, you can easily skip the inconvenience of waiting in long queues and buy Acropolis tickets in advance. These tickets will allow you to skip the crowds and enjoy exploring these ancient monuments in peace!

A significant collection of structures and ruins from various eras of Athens’ glory days may be seen in the archaeological site known as the Athenian Agora, which is also a city neighborhood today. It served as the hub of ancient Athens throughout the pre-Roman era when this region of Greece saw intense political, economic, administrative, and social activity for hundreds of years.

From the Neolithic era till the present, the agora has constantly operated in this ancient city. There were courts, temples, and municipal offices, so Athenian traders, common people, and stall owners could interact with the city’s lawmakers, philosophers, and statesmen. The Hephaisteio, for example, dates back to the 5th century BC and is currently one of the best-preserved temples of ancient Greece that dominates the neighborhood.

Delphi was one of the holiest places in mainland Greece in antiquity and housed the shrine of Apollo and his famed oracle. Many pilgrims traveled far to Delphi, which was thought to be the center of the globe, in search of Apollo’s wisdom and direction. When visiting Delphi today, it is possible to walk along the same route, known as the Sacred Way, which passes by the ruins of ancient Greek temples and treasure houses.

Highlights include the stadium of Delphi, which is located high above the site, the Temple of Apollo’s columns, and the Sanctuary of Athena Pronaia. It’s also worthwhile to spend some time in the Delphi Archaeological Museum, where you may view the façade of the Apollo Temple, the Delphi Charioteer, and the Siphnian Treasury. Stay in the neighboring town of Arachova to make the most of your trip, and go to the sanctuary early in the day to escape the crowds. Although it is a lengthy day, Delphi may also be visited as a day excursion from Athens or Thessaloniki if you don’t have much time.

The Temple of Zeus

One of the city’s most recognizable structures and one of the many exquisite historic structures in the nation is the Temple of Zeus. This magnificent structure honors Zeus, the god of the sky and thunder and the foremost Greek deity. The Temple is one of the outstanding instances of the Doric order in architecture, despite some damage. As for its past, it is said that Pisistratus and his sons gave the order to start building the temple in the sixth century BC. It was to be constructed in the Doric style out of limestone. Sadly, after their reign, there was a brief halt in construction, and that continued for the following 4 centuries.

The King Antiochus IV Epiphanes started the Temple’s renovation in the 2nd century BC by switching out the limestone for marble. He also added the Corinthian order to the Doric order that previously existed. After the king’s passing, the construction was halted for a second time. The Roman emperor Hadrian was the next to maintain the temple of Zeus in 125 BC. He ordered the interior of the structure to be embellished with many sculptures of gods and Roman emperors. The chryselephantine statue of Zeus, however, was the most significant. When the work was finished, the temple was supported by 104 pillars, each measuring 200 centimeters in diameter and 17 meters high. But despite his trust, bad things happened. This temple was repeatedly demolished. The most significant ones took place while Christianity predominated and when the Turkish army invaded the city. Archaeological study and excavations in the 20th century made what was left of it known. Approximately 20 out of the 104 columns are visible today, and one of them is on the ground.

Greece is one of the rare places on Earth that is capable of giving you such a deep insight into the history of the Western World. It is the birthplace of its philosophy and democracy. Today, it represents a mixture of modern and ancient that will leave you breathless!

Previous post:
How to Experience the Galway Bay in a Very Fun Way Next Post:
6 Useful Things To Know When Planning Your Summer Trips