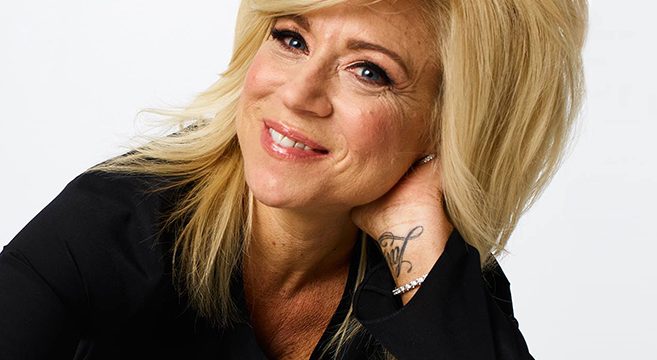 The world’s most famous medium is back for a brand new season of delivering messages from the other side. Theresa Caputo, otherwise known as TLC’s Long Island Medium, just released the first trailer for the brand new season of the smash hit show which returns on February 19, 2017. You can watch it below, as well as several other highlights from the show’s history.

Caputo’s gift as a medium was not something that came without a price. Like all mediums, her gift first appeared when she was a young child and she spent those early years trying, first, to understand that what she was seeing visually and in her mind were visions and messages of the afterlife. This is an enormous feat considering children do not fully understand the concept of “death permanence” until the age of 10 (read more about that HERE). And second, it takes quite some time to realize that not everyone can see and experience the same phenomena. As she grew older, she distanced herself from her gift, only to spend years riddled with anxiety — and not making the connection between the two. One day as she was driving with her husband she was overcome with a panic attack so severe that it changed the course of her life. She realized she could no longer ignore this dimension of her life, and she took the advice of her mother and sought counsel from a Long Island spiritual healer named Pat Longo. “After just one session, she told me that I was suppressing Spirit’s energy, which caused a lot of my anxiety, and helped me learn to channel Spirit through my chakras and release it with my words,” writes Caputo. “I began to heal and come into my own.”

Caputo’s difficult journey towards her full embrace as a medium is shared by many who experience similar lives filled with crippling anxiety, and adulthoods where they’ve lost touch with the gift that consumed their entire childhoods (watch Theresa explain more about her journey in the video at the very bottom of this post.) Being conditioned by the norms of society — from school, to mass media, to the modern world at large — all of this has a way of shutting down said gift. One person who can relate is Karen Frances McCarthy, whose story was published just yesterday by SALON in a mindblowing personal testimony entitled Love, Sex & Death: What My Fiancé’s Death Taught Me About The Afterlife.

Karen, too, had a childhood filled with paranormal encounters with spirits from the afterlife, but as she grew older she lost touch with her gift and it all but disappeared. That is, until the sudden and tragic loss of her fiancé who was killed in a cycling accident. Soon after, she found herself not only drowning in the pain of grief, but surrounded by strange things that kept happening to her everywhere she went.

“I had concerns beyond people’s inability to let me grieve,” she writes. “Electronics had begun to turn on randomly, the radio turned on when a song he liked was playing, furniture creaked, black figures appeared before me, my arms and face were being touched and shoulders squeezed, and I could smell him. Decades had passed since my last otherworldly visitations, and their memory seemed vague and unreal. Thinking I’d gone mad, I ended up sitting in the local priest’s rectory (a place I hadn’t been for 20 years), sobbing into a teacup. Father Michael quoted St. Dominic and explained how our loved ones send us signs to let us know they’re OK. He inspired me to search for remotely plausible theories of the afterlife. A week later, I slinked into a pew at the back of a Spiritualist church service, striving for anonymity and expecting fraudulence. I got neither. The pastor turned to me. ‘There’s a man beside you,’ she said. ‘He’s young, tall, blond, recently passed to Spirit. Seems to love cycling. He’s very protective of you. Do you know who he is?’ It took some time to get past ‘how did she know that?’ But with continual strange events and an increasing awareness of a presence, the evidence was soon overwhelming: Death was something more than decompiled atoms en route to cosmic reabsorption. Consciousness couldn’t be an eminent property of the brain; it clearly survived in some form. But what?”

What happens next is truly one of the most extraordinary brushes with the afterlife I have ever heard, and you can read it in full at SALON.com. To learn how you can nurture and develop your own skills as a mentalist with various exercises and techniques, be sure to grab a copy of Clint Marsh’s The Mentalist’s Handbook: An Explorer’s Guide To Astral, Spirit, and Psychic Worlds.

SEE ALSO: Revolutionary Theory Of Biocentrism Unlocks The Mysteries Of Consciousness, The Soul & The Afterlife
SEE ALSO: Anita Moorjani’s Near Death Experience Will Change Everything You Thought You Ever Knew About Life
SEE ALSO: Sex Magic Is Real: How To Cast Powerful Spells With Your Orgasms & Become A Magnet Of Good Fortune
.


Previous post:
The Tao Of Tom: How Tom Brady Uses An 80-20 Diet, Meditation, Yoga & One Book To Age Backwards Next Post:
H.G. Wells’ Love Of Portugal & The Stunning Home Up North Which He Would Consider “The Dream”