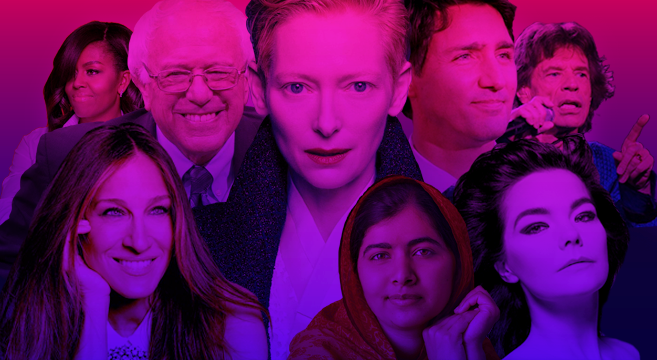 Are You An Amortal Perennial? The Fascinating Reasons Why Aging Has Become An Extinct Myth For Many

Society is nothing more than a bunch of rules we’ve all convinced ourselves to follow, and in many ways the notion of identity is the same. And apart from our gender, there is arguably nothing else we identify with more closely than our age. Every twelve months the Universe reminds us that we have to update the “how old are you?” section of our identity card (i.e. our age stamp), but for a growing number of people out there this annual ritual is no longer relevant. When it comes to aging, our world is undergoing a rapid transfiguration.

In her fascinating article entitled Amortality, written for TIME‘s 10 Ideas Changing The World Write Now, Catherine Mayer explains some of the reasons why so many people have stopped identifying with their age stamp and started identifying with something far more important. “Amortals live among us. In their teens and 20s, they may seem preternaturally experienced. In later life, they often look young and dress younger. They have kids early or late — sometimes very late — or not at all. Their emotional lives are as chaotic as their financial planning. The defining characteristic of amortality is to live in the same way, at the same pitch, doing and consuming much the same things, from late teens right up until death … [Amortality] is about more than just the ripple effect of baby boomers’ resisting the onset of age. Amortality is a stranger, stronger alchemy, created by the intersection of that trend with a massive increase in life expectancy and a deep decline in the influence of organized religion — all viewed through the blue haze of Viagra.” You can read the full article at TIME.com, and watch Catherine’s interview below.

While Catherine Mayer describes these age-defiers as “amortals,” writer Gina Pell crafts a different terminology for these people — perennials. In Meet The Perennials, Pell might use a different term but her theory is perfectly parallel with Mayer’s. “The Perennials. We are ever-blooming, relevant people of all ages who live in the present time, know what’s happening in the world, stay current with technology, and have friends of all ages. We get involved, stay curious, mentor others, are passionate, compassionate, creative, confident, collaborative, global-minded, risk takers who continue to push up against our growing edge and know how to hustle. We comprise an inclusive, enduring mindset, not a divisive demographic. Perennials are also vectors who have a wide appeal and spread ideas and commerce faster than any single generation. Lady Gaga + Tony Bennett, Lena Dunham + Jenni Konner, Beyoncé + Jay-Z, Bob Dylan, Jimmy Fallon, Pharrell Williams, Justin Trudeau, Ellen DeGeneres, Malala, Sheryl Sandberg, Mick Jagger, Michelle Obama, Emma Watson, Elon Musk, Bernie Sanders, Diane Von Furstenberg, Lorne Michaels, Ai Weiwei, John Oliver, Aziz Ansari, the little girl on Stranger Things — #Perennials.”

Another possible explanation for the emergence of the amortal pirennial and the new Post-Age Age could have something to do with more and more people discovering the importance of the three dimensions that make up the good life — work, play, love. Pulitzer Prize-winning historian Doris Kearns Goodwin (Team of Rivals: The Political Genius of Abraham Lincoln) has spent her entire life studying the inner lives of many of America’s greatest presidents, and it wasn’t until she compared those presidents who had rich, fulfilling lives versus those who had miserable ones that she discovered how these three dimensions of life intersect. As she explains in her fascinating TED Talk below, in order to fully unlock your age-defying spirit and build the greatest life possible, you need to pursue all three dimensions equally with equal force. If you sacrifice even one you will crash and burn, and ultimately be miserable.

It’s also possible that amortal pirennials have stopped identifying so much with the left side of their brains (i.e. the side that controls ego, past, future, etc.), and started identifying more with the right side (i.e. the side that controls perception, creativity, spirit, the present moment, etc.) If you want to learn exactly what this means then be sure to watch Dr. Jill Bolte Taylor‘s mindblowing talk below entitled Stroke Of Insight.

At the end of the day, what separates the amortal pirennials from the old school old-agers is the fact that they do not identify with their age stamp. Perhaps my favorite amortal pirennial of all is Tilda Swinton (i.e. the Queen of FEELguide) who doesn’t believe in the concept of identity at all (you can watch her explain this in an interview below). Identity, after all, is just a story we’ve convinced ourselves to be real. If identity is fiction, then amortal pirennials are interested in crafting truly original life stories that defy outdated societal norms.

SEE ALSO: Tom Ford: “I Am Tired Of The Cult Of Youth”
SEE ALSO: Watch “The Atlantic” Editor Explain The Science Of Why Happiness Increases Exponentially After 50
SEE ALSO: 75 Years In The Making: Harvard Just Released Its Epic Study On What Men Need To Live A Happy Life
SEE ALSO: The “Blue Zones” Super-Agers Who Forget To Die: The Fascinating TED Talk On How To Live Beyond 100
.