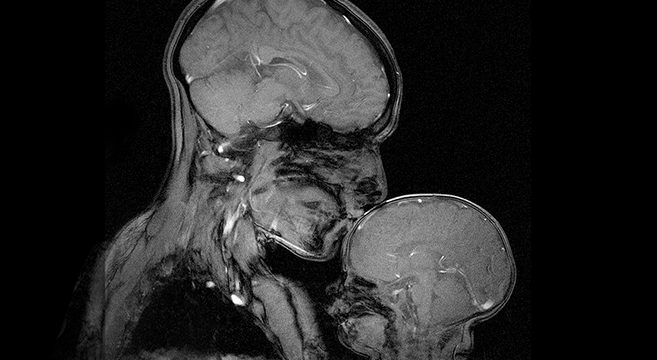 Rebecca Saxe is a neuroscientist and Principal Investigator at the Saxelab Social Cognitive Neuroscience Laboratory based in the Brain & Cognitive Sciences Department at MIT. Recently Saxe captured a stunning MRI image of a mother with her baby curled up in her arms. In a feature essay written for Smithsonian.com, Saxe writes, “This particular MR image, though, was not made for diagnostic purposes, nor even really for science. No one, to my knowledge, had ever made an MR image of a mother and child. We made this one because we wanted to see it … Here is a depiction of one of the hardest problems in neuroscience: How will changes in that specific little organ accomplish the unfolding of a whole human mind?” What’s more, as Saxe explains later — the mother in the image is her. For more great stories about the human brain visit The Human Brain on FEELguide. (Image credit: Rebecca Saxe and Atsushi Takahashi / Department of Brain and Cognitive Sciences, MIT / Athinoula A. Martinos Imaging Center at the McGovern Institute for Brain Research, MIT)

In keeping, even though Mother’s Day was technically yesterday, in my view Mother’s Day is everyday. So it’s never too late to share a story or two about a mother’s unconditional love for her child. This bond is beautifully expressed in a brand new short film from filmmaker Charles Frank, who directed an emotional and heartwarming love letter to his mom entitled My Baby You’ll Be. Frank prefaces the video with the following poem from Robert Munsch: “I’ll love you forever / I’ll like you for always / As long as I’m living / My baby you’ll be.” You can watch the video below — and be sure to have your tissues ready.

To honor Mother’s Day yesterday, my Future Husband Sufjan Stevens‘ record label, Asthmatic Kitty Records, posted this beautiful video from My Brightest Diamond (i.e. the music project of singer–songwriter and multi-instrumentalist Shara Worden) performing “I Have Never Loved Someone”. You can watch it below as well (and you might need a tissue for that one too).

Previous post:
The 10 Most Amazing Tips & Secrets For Mastering Eye Contact To Get A Dream Job, Fall In Love & More Next Post:
Nicolas Winding Refn’s “The Neon Demon” Starring Elle Fanning Gets A Brand New Trailer