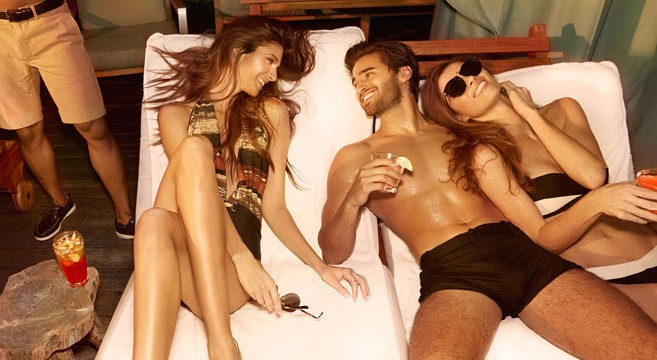 A brand new 2-part study by neuroscientists from Duke University has led to a fascinating discovery which now allows scientists to predict who is most likely to drink heavily and engage in promiscuous sexual behavior in response to stress. The study observed 759 undergraduate heterosexual students who averaged 19-years-old, and who were dealing with above-normal levels of stress. “By knowing the biology that predicts risk, we hope to eventually change the biology — or at least meet that biology with other forces to stem the risk,” said the senior author of both studies, Ahmad Hariri, professor of psychology and neuroscience at Duke University. In both studies, the team used non-invasive functional MRI imaging to measure the activity of two brain areas that help shape opposing behaviors crucial for survival: the reward-seeking ventral striatum and the threat-assessing amygdala.

The press release reads: “Hariri’s group showed [in the first study] that having both an overactive ventral striatum and an underactive amygdala was associated with problem drinking in response to stress. Hariri’s team confirmed this finding in the new study using a larger sample of 759 undergraduate students who averaged 19-years0old. The researchers also discovered that the inverse brain pattern — low ventral striatum and high amygdala activity — predicted problem drinking in response to stress both at the time of the scan and three months after. These results were published June 30th in Molecular Psychiatry. ‘We now have these two distinct profiles of risk that, in general, reflect imbalance in the function of typically complementary brain areas,’ Hariri said. ‘If you have high activity in both areas, no problem. If you have low activity in both areas, no problem. It’s when they’re out of whack that individuals may have problems with drinking.’ Interestingly, people with the two different risk profiles may drink for different reasons. Hariri speculates that those with high ventral striatum activity may be motivated to drink because they are impulsive; combined with a lower danger signal coming from the amygdala, they may be less inclined to reign in their behavior. In contrast, the participants with low ventral striatum activity usually have lower mood, and an overactive amygdala may make them more sensitive to stress, so they might drink as a coping mechanism.”

Researchers also discovered how balance in the activity of the ventral striatum and the amygdala also predicts sexual behavior, according to the second study, which appeared June 10th in the Journal of Neuroscience. “In that study, a team led by graduate student Elizabeth Victor asked a subset of DNS participants (70 heterosexual men and women) how many new sexual partners they acquired over an 11-month period. For men, the same pattern of brain activity linked to problem drinking — high ventral striatum and low amygdala activity — was associated with a greater number of sexual partners compared to those men with more balanced activity of the two brain areas. But the pattern for more sexually active women was different: they had higher-than-normal activity in both the ventral striatum and the amygdala — indicating both high reward and high threat. ‘It’s not really clear why that is,’ Hariri said. ‘One possibility is that this amygdala signal is representing different things in men and women.’ In women, amygdala activity might be driving general awareness, arousal, and responsiveness which, when combined with strong reward-related activity in the ventral striatum, leads to a greater number of partners. In contrast, in men, the amygdala signal could be more focused on detecting danger, Hariri said.”

The next phase in the research is to examine both risky sex and problem drinking’s connection to a third brain region: the prefrontal cortex, which is the brain’s ultimate decision-maker. This part of the brain may help the researchers predict more accurately which individuals may engage in risky behaviors. Developing brain-based predictors is important because individuals aren’t necessarily aware of their risks, Hariri said, nor are their doctors. “The key is that these are patterns present before problems emerge,” especially in response to stress, Hariri said. “If we know this about an individual, we can anticipate the problems and anticipate what the nature of those problems will be. This knowledge brings us one step closer to preventing the problems altogether.”

In related news this week, another study has strongly linked blue eye color to alcoholism. CBS News writes: “Using the database, the researchers identified over 1,200 people with European ancestry who suffered from alcohol dependence. Once the team recognized an eye color connection, they reanalyzed their data three times, comparing the participants’ age, gender and differences in backgrounds and locations. The researchers found that European Americans with light-colored eyes had a higher rate of alcohol dependence than those with dark brown eyes. But blue eyes were most strongly linked to this condition, the study published in the July issue of the American Journal of Medical Genetics: Neuropsychiatric Genetics (Part B) revealed. As it turns out, the genetic components that determine eye color line up along genes related to excessive alcohol use, the study authors explained. ‘This suggests an intriguing possibility that eye color can be useful in the clinic for alcohol dependence diagnosis,’ study co-author Arvis Sulovari, a doctoral student in cellular, molecular and biological sciences at the university, said in the news release.” (Photo courtesy of SBE)

SEE ALSO: The Ultimate Beer Hack: How To Drink As Much Beer As You Want Without Ever Getting Drunk
SEE ALSO: Is Monogamy A Natural State For Humans? We Finally Have A Scientific & Anthropological Answer
SEE ALSO: A Fascinating Exploration Of “Alcohol: The Most Astonishing Molecule” And How It Shaped Civilization
SEE ALSO: Enormous Study On Jealousy Uncovers The Impact Of Sexual vs. Emotional Infidelity For Men & Women
SEE ALSO: Why Do We Cheat? The World’s Leading Infidelity Expert Explains Everything In Riveting New TED Talk