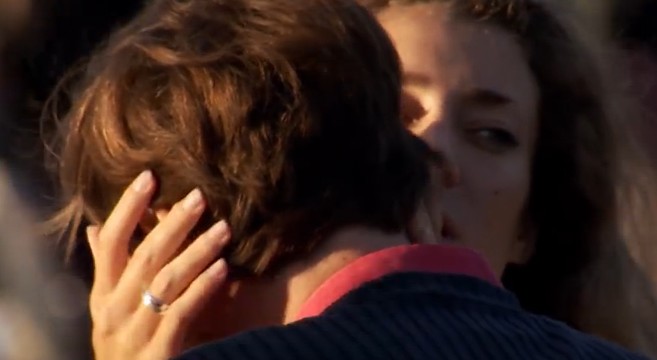 Is Monogamy A Natural State For Humans? We Finally Have A Scientific & Anthropological Answer

It’s hard to be a human sometimes.  On a typical day we find ourselves moving through our daily lives being bounced around between messages coming from inside our bodies and messages coming from outside as well.  Yes, I would love nothing more than to rip the clothes off that hot hunk I met in the grocery store last night, but this internal impulse conflicts with the far louder message coming from society around me that tells me it’s impolite to do such a thing.  Not to mention the fact I’d probably have to find a new grocery store if I tried such a passion-fueled stunt in public.

But what about a situation where the stakes are much higher?  What is happening, for instance, inside a human brain (and society at large) when someone who has been married for years gets turned on by a gorgeous passerby they cross paths with at work, at play, or elsewhere?  Is it “human” to deny those urges and continue to devote yourself to your monogamous relationship?  Or is a more human response to jump their bones?  This is something evolutionary biologists and anthropologists have been studying for years, and it looks as if we may finally have an answer — albeit a complicated one.

Among the hundreds of primate species in the natural world, some of them are polygamous (i.e. such as our closest natural ancestors, chimps and baboons) while others are monogamous (i.e. gibbons and marmosets).  Each of these species has a unique cross section of behavioral traits.

The polygamous species of primates reveal a major difference in body size and structure between males and females.  Since a great deal of these males’ lives are spent competing for dominance and mating rights, these polygamous primates are known as “tournament species” and are typically much larger, more muscular, more aggressive, heavier, and have much larger canines than their female counterparts.  Evolution has endowed these males with competition-based traits such as long hair, extravagant facial coloration, and impressive silver backs — very much like the notoriously polygamous peacock.  Since the females in polygamous species will mate so frequently, the sperm of the males has also evolved to be extremely competitive by means of large testes (as a proportion of body weight) and extremely high rates of sperm production.  The males in these species will mate with as many females as they possibly can, they will live shorter life spans than the females, they have a much higher metabolic rate than the females, and have absolutely nothing to do with raising or caring for the child.

In monogamous species of primates the males do much of the child-rearing, and therefore do not participate in any elaborate mating dance or performance.  All their energy is devoted to caring for the child, and they absolutely do not mate with random females.  Not only do the monogamous males do the majority of the caring for the child, their bodies show little to no signs of “sexual dimorphism” (i.e. there is no major difference in body size, metabolic rate, musculature and life span compared to the females).  Testes are small, mating is very infrequent, and sperm count is very low.

The take-away, therefore, is as follows: the next time you are watching a nature documentary on primates or are observing primates in the natural world, if you notice the males are huge in comparison to the smaller females, or if the males have brightly colored noses, hair, etc., this is a polygamous species.  By contrast, if you have trouble distinguishing between the males and the females, it is definitely a monogamous species of primate.

So where do humans rank in this analysis?  Men are 10% taller and 20% heavier than women, require 20% more calories, and live 6% shorter than women.  Men are more sexually dimorphic than monogamous primate species, and are less sexually dimorphic than polygamous species.  Men have bigger testes and higher sperm counts than monogamous primates, but are not as large in this regard as the polygamous primates.  This “halfway” pattern is observed in every other measure of comparison.  The end result — human are neither monogamous or polygamous.  We are exactly in the middle.

So what is the evolutionary function of monogamy?  In one study published in Proceedings of the National Academy of Sciences (PNAS), researchers determined that monogamy emerged hundreds of thousands of years ago as a necessary tool for preventing infanticide — the murdering of babies by other dominant males.  But why would evolution program men to protect one batch of children rather than encourage the other extreme of running around mating as often as possible in order to increase the spread of their genes throughout the population?  The study speculates that infanticide was so prevalent that it was more advantageous for men to ensure the survival of a small group of children via monogamy than to spread their seed among many females and increase the exposure to murder by rival males.  The authors explain that attacking males were forced to kill the babies of rival males in order to be able to breed with the babies’ mother, who would otherwise refuse conception of a new baby if she was already nursing.  “This is the first time that the theories for the evolution of monogamy have been systematically tested, conclusively showing that infanticide is the driver of monogamy,” says Christopher Opie, a research fellow in the Anthropology Department of University College London.  “This brings to a close the long running debate about the origin of monogamy in primates.”

A “rival” study recently published in the journal Science also explores the evolutionary function of monogamy.  In an exhaustive analysis of 2,500 mammals (more than half the known species), authors Dieter Lukas and Tim Clutton-Brock of Cambridge University found zero link between infanticide and monogamy.  They learned that monogamy functions very much like real estate, having two fundamental governors — location and supply.  “Monogamy develops where females live at low density,” explains Lukas.  “Males cannot fend off rival suitors from more than one female at a time because they’re too spread out.  Therefore, they cannot ensure their young are the ones the female is carrying, so they stick with one female.  It’s a consequence of resource defense.”  The Science study also highlights how in mammalian species that are monogamous, the females tend to be solitary and intolerant of other females.  “Unlike ungulates, who are rarely monogamous, these mammals’ nutritional needs are greater, and they therefore shoo off competitors for the food resources.”  Both studies confirmed that the predominant reason a mammalian male sticks around has nothing to do with the purpose of helping to raise the young — he sticks around to be 100% certain the female is pregnant with his child instead of some other male’s.  This is more of a consequence of mating-for-life as opposed to a cause.

The PNAS study extrapolates their results by suggesting that due to the fact humans have the largest brains of any species (relative to body size), it takes much longer to nurture the young and protect them from threats.  The Science study, however, is much less convinced about monogamy:  “We are cautious on making any definite statement.  Humans are such unusual animals,” says Lukas.  Adds Clutton-Brock: “I’m far from convinced that humans are indeed monogamous.”  Only about 5% of the 4,000 or so mammal species on earth hang around with just one mate (these include wolves, beavers, naked mole rats and meerkats).

As TIME magazine concludes: “How important were kids in man’s move toward monogamy?  It’s a fascinating fight, but ultimately whether or not monogamy is natural is less relevant than whether it’s desirable.  When considering behavior, naturalness is not the most important issue.  There’s nothing natural about reading, using toilet paper or skydiving, but they have their advantages.  Monogamy, in humans, seems to be both an acquired taste and a learned skill.  The question remains whether it’s worth the cost of learning it.”

An interesting footnote to this study is a recent breakthrough in epigenetics research which led to the discovery of the evolutionary function of homosexuality.  You can read more about this fascinating scientific discovery by CLICKING HERE.

SEE ALSO: The Calculus Of Love: Watch How The Fermi Paradox Proves You Have 831 Soulmates Out There Waiting
SEE ALSO: Fascinating Research Discovers The “Love” Molecule: The Source Of Monogamy
SEE ALSO: Watch This “CBS This Morning” Report On The Surprising Secrets Of “Happy Couples” & The New Normal
SEE ALSO: How To Get Your Love In Orbit: Philosopher Judith Butler’s Brilliant Essay On Love & The Doubting Mind
SEE ALSO: Poly Pride: “Intelligent Life” Explores Multiple-Partner Loving Relationships
SEE ALSO: These Are The 7 Parts & Places In The Human Body Where Love Abides, Grows, And Changes

Previous post:
This Is How You Submerge A Spinning Record Player Underwater And Still Get Perfect Sound Next Post:
Beck’s New Album “Morning Phase” Is Now Streaming Online & It’s Everything You Dreamed It Would Be