The Ultimate Beer Hack: How To Drink As Much Beer As You Want Without Ever Getting Drunk

Last week the Internet fell in love with the news that drinking too much hops-laden beer can lead to man boobs and impotence — otherwise known as beer breasts and brewers droop — causing millions of men to suddenly fall very much out of love with their favorite drink. In an ironic twist of fate, however, the news came just days after the “Dad Bod” became the hottest new trend. So if you’re a chubby man with fat tits who loves drinkin’ beer, chances are you’re also a hot mess in the sac as well. In the Middle Ages monks commonly used hops to purposely kill their sex drive, which modern science discovered is due to hops-heavy beer being full of estrogen. But not only does does beer wipe out your desire to get it on — it’s also a nightmare in being able to get it up. What’s more, “[hops] also have a history of use alongside valerian root as a sedative, sleep aid and mild narcotic,” according to the team at Independence Brewing in Austin.

Raquel Smith Callis of Munchies, VICE’s digital video channel dedicated to food and its global purpose, writes: “In the book Sacred and Herbal Healing Beers, herbalist Stephen Herrod Buhner describes the three standard uses of hops in herbal medicine: as a sleep inducer; as a diuretic that successfully promotes urine flow; and finally, as a natural source of phytoestrogen to treat menopause and endometriosis. The herbalist Susan Weed also refers to hops as a nutritive painkiller, a sleep-inducing herb, and as an effective supplement to boost milk production in lactating women.”

So if you’re a guy like me you’re thinking: how can we have the best of both worlds? Charles Poliquin is arguably the world’s foremost expert on health, food and fitness, and their connection the complexities of hormonal balance. Poliquin is also one of the world’s most successful strength coaches whose clients include a mile-long list of gold medal-winning Olympic athletes, as well as being the #1 personal fitness trainer and nutritionist for many of the top players in the NFL and NHL. Poliquin’s trademark is his body hormone profiling method, which he invented, called BioSignature Modulation. To find out Poliquin’s best tips for how to rid yourself of man boobs and boost your testosterone level the all-natural way CLICK HERE and watch the report at the bottom of this post.

Now that you’ve shed your man boobs and that hideous dad bod thanks to the Poliquin Method, you deserve to celebrate. Armed with your new estrogen-fighting health regimen, you can hit the pub for your favorite cold beer and never have to worry about your boobs going rogue ever again. Your only concern now is knowing when to call it a night and keep from falling off your stool, right? Well, according to Esquire you will never have to worry about getting too drunk off beer ever again because now you can have the best of all three worlds. As Esquire explains in the video above, if you want to drink beer, never get drunk, and be able to drive home perfectly sober, there is one simple technique you can use to hack beer’s alcohol effects. It’s a simple trick invented by legendary beer master Joseph Owades (1919-2005). You are now officially the Jedi Master of beer, and ready for your audition for the next Magic Mike movie — which begs the question: what comes after XXL?

If you love alcohol as much as most of the world then you’ll enjoy Scientific American‘s recent article exploring the powerful ways in which alcohol has shaped human civilization. “The substance has nourished and intoxicated animal life long before humans walked upright. Yet our manipulation and consumption of alcohol led to profound physical and cultural effects — and helped make us who we are.” You can read the full story here: “Alcohol: The Most Astonishing Molecule.” (Photo courtesy of Men’s Health, Heineken bottle courtesy of me)

SEE ALSO: “60 Minutes” Goes To Scotland’s Islay Island, The Heaven Of Single-Malt Whiskys
SEE ALSO: The Orgasm Nutrient: The Science Of What 3 Orgasms Per Week Will Do To Your Body & Life
SEE ALSO: 75 Years In The Making: Harvard Just Released Its Epic Study On What Men Need To Live A Happy Life
SEE ALSO: New Science Proves Champagne Has Enormous Brain-Boosting Power, Fights Against Brain Degeneration
SEE ALSO: “Mori” From THE SOFT Has Me Dreaming Of A “Magic Mike” Slowdance From (The Hard) Joe Manganiello 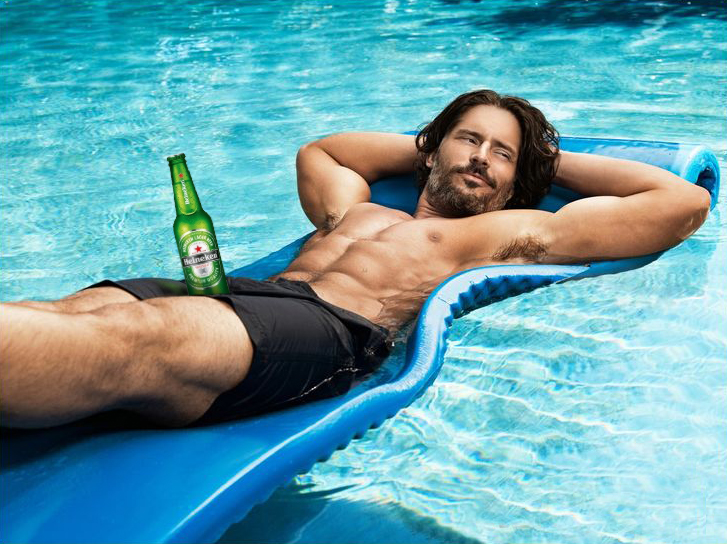