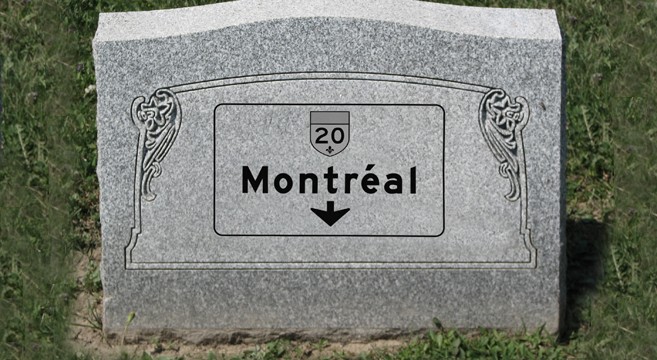 When Quebec’s October 30, 1995 referendum on the question of independence from Canada narrowly missed being passed after the 50.58% No vs. 49.42% Yes results were tallied, the city of Montreal embarked on an unprecedented boom. In the years that followed, Montreal became the envy of all North American cities with its affordable rent and housing, an astonishing balance of arts and culture, and an intoxicating sense of unlimited potential and opportunity. The result could be seen first-hand up and down the city’s renowned streets and avenues. Tragically, however, that has all been squandered by an epic perfect storm of over-taxation, gross mismanagement, bureaucratic overreach, a little bit of overconfidence, and a whole lot of greed.

Perhaps the most disturbing example is Montreal‘s iconic Saint Laurent Boulevard. The most historically significant boulevard in the entire country, Saint Laurent is a living timeline museum of ethnic settler arrivals over the course of the city’s history. The Old Port leads to Chinatown, which leads to the gritty red light district, followed by the Portuguese, Ukrainian, Spanish, Italian, then Greek districts as you go further north. What used to be a bustling centrepiece in the stretch between Sherbrooke and Mont Royal has now become an urban graveyard of failed stores, restaurants, and other small businesses. Over-taxation has sent most of these occupants packing in recent years, while greedy landlords have suffocated most of the others with rent-jacking. A mismanaged infrastructure construction nightmare further suffocated many other businesses over the past few years as well. Walk down Saint Laurent today, and you will see more For Rent signs than you can count.

Mont Royal is another sad example of a formerly vibrant avenue now suffering the same fate of high taxes and greedy landlords. Some of Mont Royal’s greatest restaurants, coffee shops, and boutiques have closed their doors because they can no longer survive. Just a few blocks north is Laurier East which is also on the brink of collapse due to the outrageous urban planning decisions of a clueless mayor, Luc Fernandez, who has allowed obscene rent hikes to run rampant, all while creating traffic engineering chaos with a nightmarish labyrinthian paradox of one-way streets and an out of control explosion of bike lanes and parking restrictions. Local businesses have come together with a protest of For Rent signs in every window as a show of force against one of Canada’s most out-to-lunch mayors.

Saint Denis is another of Montreal’s legacy avenues which is turning into a ghost town. You can read more about the collapse by visiting MtlBlog.com. Jeremy Hazan also writes on the decay of Saint Laurent, “According to La Presse, throughout the entire boulevard more than 160 storefronts are vacant, most of them being ground floor businesses. Between Sherbrooke and Mount-Royal alone, the busiest section of the boulevard, 47 storefronts remain unoccupied.” You can read the full story at MtlBlog.com.

And this is just for starters. Many other streets and avenues across Montreal are dying under the same bureaucratic and financial misery. The city which used to be an urban designer’s paradise and gold standard has since become a global lesson in what not to do. The Atlantic recently published a terrific feature on this very topic, entitled “The Battle For Downtown: From Canada To The Carolinas” and you can read it in full by visiting TheAtlantic.com. And to find out why New York is falling victim to the same forces you can read “Why Are There So Many Shuttered Storefronts In The West Village?” at NewYorker.com.

Previous post:
Watch The Beautiful Trailer For “The End Of The Tour,” The True Story Of David Foster Wallace Next Post:
LINKguide (May 29, 2015)