Saint Laurent Boulevard: A Legendary Place In Canada’s Psyche And Its Living History

Saint Laurent Boulevard is the most historic street in Montreal, and is considered to be one of Canada’s greatest examples of “living history.”  A commercial artery and cultural heritage site, the street runs north-south through the near-centre of the city and is nicknamed The Main.  Saint Laurent Boulevard was initially established as Saint Lambert Street in 1672 when farmers and lumberjacks used the strip to transport produce and wood into and throughout the entire city.

Starting at De la Commune Street, the street begins perpendicular to the shore of the Saint Lawrence River.  It crosses the entire island and passes through five major boroughs ending at Somerville Street at the top of the island on the shore of Rivière des Prairies (a total length of about 11.25km).  Saint Laurent Street became Saint Laurent Boulevard in 1905, and serves as the city’s physical division of east and west.  The city’s address and postal system is structured with Saint Laurent as its origin (with street names being suffixed by West or East depending on their orientation).  The street traditionally divides Montreal by language, ethnicity, and class.  Saint Laurent was for generations the symbolic dividing line for the city, with the predominantly English-speaking population to the west (including Westmount, the city’s wealthiest borough), French-speaking population to the east, and immigrant communities in between the axis along The Main and Park Avenue.  Unlike the majority of Canada’s other cities where the individual cultural neighbourhoods were almost always scattered throughout the urban fabric, Saint Laurent ensured they were clustered together.  The Main runs through many of these ethnic communities, a first stop for immigrant communities for nearly 150 years (initially Jewish, Chinese and Italian, and later Portuguese, Greek, Arab, Haitian and others).  Most of these ethnic “clusters” are still centered in the same areas along The Main as they were more than a century ago.  Montreal served as the industrial heart of the entire country until the 1960s, and the brick and stone factory buildings which are concentrated between Rue de la Commune and Jean Talon Street have mostly been converted to modern commercial and residential buildings.  In 2002, the Historic Sites and Monuments Board of Canada named Saint Laurent Boulevard as The Main National Historic Site of Canada.

The Jewish community on The Main sprang up after the heavy immigration of the early to mid-1900s.  Jewish settlement occurred first on the lower Main, in a section that is now part of Montreal’s Chinatown.  By 1871, a Jewish enclave numbering just over 400 people had formed by the corner of Saint Laurent and Dorchester Street, with the first Jewish educational institution, the Talmud Torah, located at the corner of Saint Urbain Street and De la Gauchetière Street.  Middle class members of the community were already beginning to move up the Main towards Sherbrooke and Prince Arthur Streets, while further north, a small number of upper class Jewish residents lived near McGill University.  The main axes of the Jewish quarter were Saint Laurent Boulevard, Clark Street, Saint Urbain Street, Esplanade Street and Park Avenue. By the 1920s and 1930s, dozens of synagogues were in the area. Landmarks on Saint Laurent that bear witness to this historic community include the iconic Schwartz’s Delicatessen.  Despite Canada’s poor record of Jewish immigration between 1933 and 1948, Montreal still managed to become home to the world’s third-largest concentration of Holocaust survivors.

Saint Laurent Boulevard is quite often compared to New York.  Part of the reason is that it has a nearly identical physical resemblance, in terms of architectural vernacular, scale, and rhythm, to streets like Broadway and districts like Soho.  Author Hugh MacLennan, who arrived in Montreal in 1935, noted: “The Main astonished me, and it still does. I had walked the streets of many famous cities in England, Europe and the United States, but this was something new. It was probably the most creative area in North America, more so even than New York.”

In summary, Montreal’s Saint Laurent Boulevard is both a real street and a legendary place in the Canadian psyche, a street that is both magical and mysterious.  In the words of poet Irving Layton (who grew up there) the Boulevard was “raw, vulgar, dynamic, and dramatic.” To Andrée Maillet, Saint-Laurent Street was flashing neon, the smell of sausages, French fries and gefiltefish, affirming that one is “never alone here.” For Mordecai Richler, it was at the heart of his city:

“…all of the Jews do their buying and their praying and their agitating and most of their sinning on Saint Laurent Boulevard, which is the aorta of the ghetto, reaching out in one direction towards Mount Royal, and past that (where it is no longer the ghetto) into the financial district and the factory slums, coming to a hard stop at the waterfront.  In the other direction, northwards, Saint Laurent Boulevard approaches the fields at the city limits; there is a rumour of grass and sun and quick spurious love-making.”

Every night Saint Laurent Boulevard is lit up like a neon cake and used-up men and women stumble out of a hundred different flophouses to mix with rabbinical students, pimps, Trotskyites, and poolroom sharks.  In author Hugh MacLennan’s words, this “strong sinewy backbone of a growing city” has become one of Canada’s most potently symbolic Main Streets. 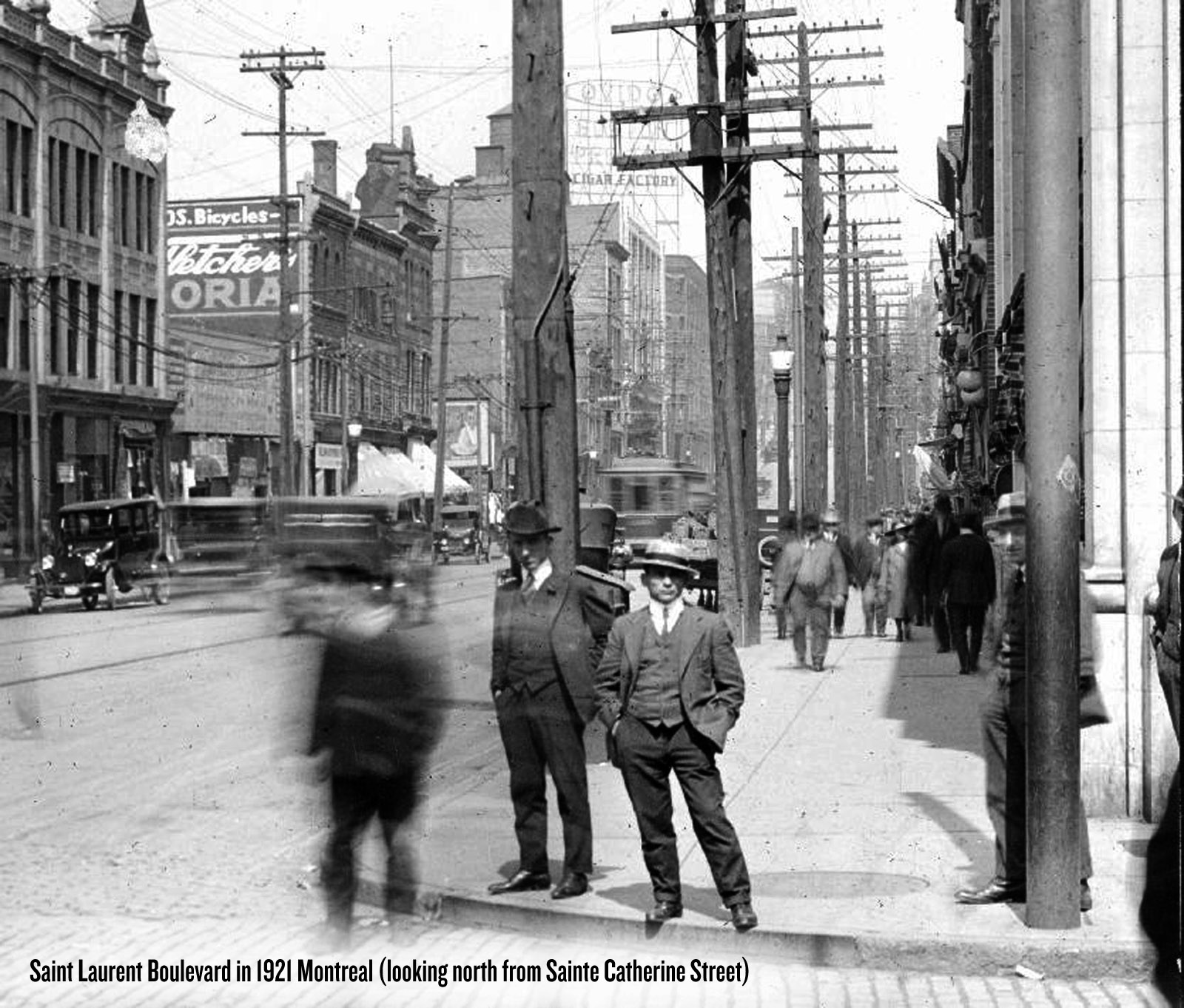 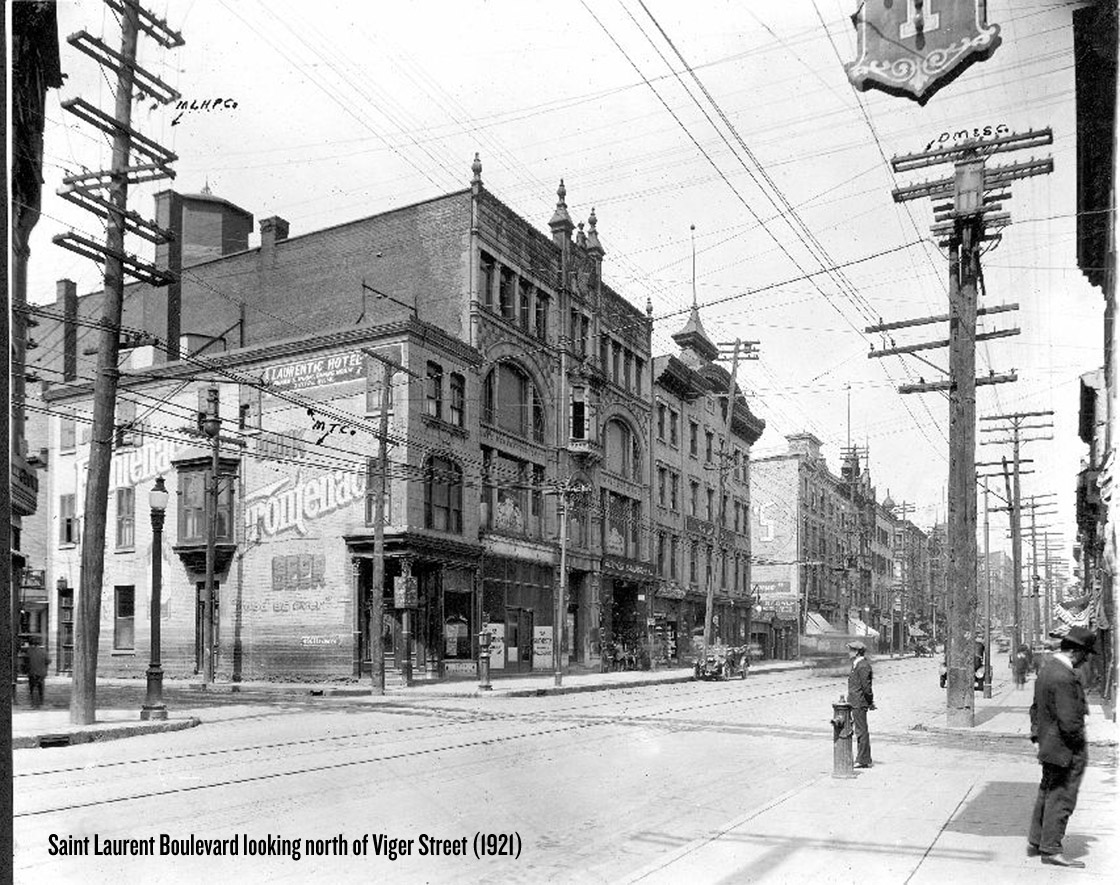