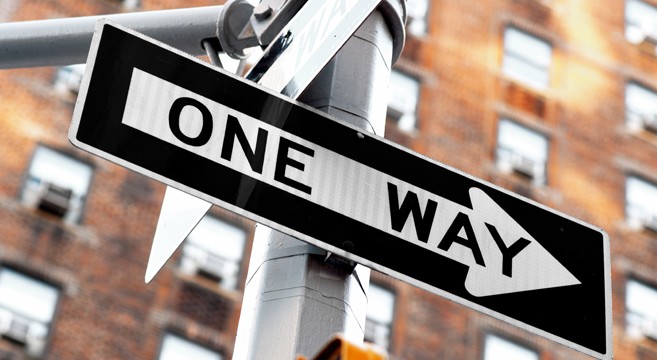 There are few things that enrage me more when I’m behind the wheel than when I’m trying to make a turn but can’t due to a one-way street. So if there’s any data I can find that can help bring one-way traffic routes to extinction I’m going to spread the word. The Washington Post is reporting on one study which recently found that one-way streets, quite simply, make everything worse. “In 2011, Louisville converted two one-way streets near downtown, each a little more than a mile long, back to two-way traffic. In data that they gathered over the following three years, Gilderbloom and William Riggs found that traffic collisions dropped steeply — by 36 percent on one street and 60 percent on the other — after the conversion, even as the number of cars traveling these roads increased. Crime dropped too, by about a quarter, as crime in the rest of the city was rising. Property values rose, as did business revenue and pedestrian traffic, relative to before the change and to a pair of nearby comparison streets. The city, as a result, now stands to collect higher property tax revenues along these streets, and to spend less sending first-responders to accidents there.” You can read the full story at WashingtonPost.com. (Source: Kottke, Photo: Overdrive Online)

Previous post:
This 5-Minute Video Explains All You Need To Know About The Difference Between Sunnis And Shiites Next Post:
Watch The Stunning Timelapse Animation Of Manhattan’s 500-Year Development From Inside WTC Elevator