In her new film, Still Alice, Julianne Moore plays Dr. Alice Howland, a mother of three who learns she has early-onset Alzheimer’s disease.  The film focuses on Alice and her family as they come to terms with the devastating diagnosis and learn to live with their family’s new reality.  Moore is considered a major frontrunner for Best Actress at the upcoming Academy Awards, and she has already been awarded the top actress prize by the National Board of Review Awards, Gotham Independent Film Awards and Hollywood Film Awards.  The trailer for Still Alice was released yesterday — the very same day Stanford University unveiled a groundbreaking new discovery which some believe holds the keys to a cure.

Stanford University writes: “The mass die-off of nerve cells in the brains of people with Alzheimer’s disease may largely occur because an entirely different class of brain cells, called microglia, begin to fall down on the job, according to a new study by researchers at the Stanford University School of Medicine.  The researchers found that, in mice, blocking the action of a single molecule on the surface of microglia restored the cells’ ability to get the job done — and reversed memory loss and myriad other Alzheimer’s-like features in the animals.  The study, published online Dec. 8 in The Journal of Clinical Investigation, illustrates the importance of microglia and could lead to new ways of warding off the onset of Alzheimer’s disease, which is predicted to afflict 15 million people by mid-century unless some form of cure or prevention is found.  The study also may help explain an intriguing association between aspirin and reduced rates of Alzheimer’s.  Microglia, which constitute about 10-15 percent of all the cells in the brain, actually resemble immune cells considerably more than they do nerve cells.”

You can read the full story behind the discovery at Med.Stanford.edu.  I’ve attached the trailer for Still Alice above, and the film is set for release across North America on January 16th, 2015.  For all FEELguide stories related to Alzheimer’s be sure to visit Alzheimer’s on FEELguide. 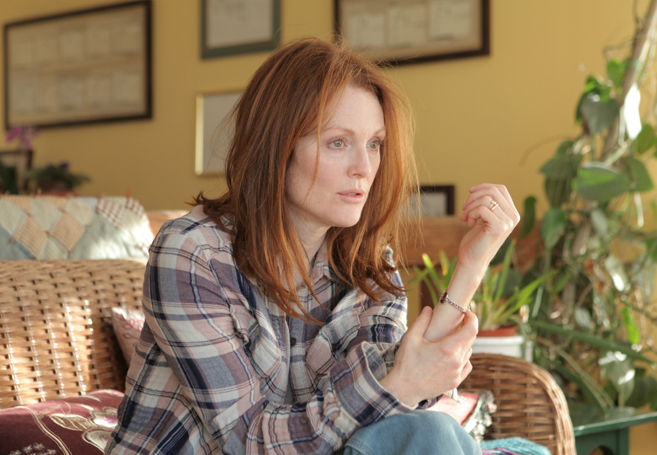 Previous post:
President Obama Hijacks “The Colbert Report” And The Epic Result Was Legendary Comedy Gold Next Post:
Johnny Jewel Releases 33 Minutes Of Atmospheric Electronic Wallpaper “The Other Side Of Midnight”