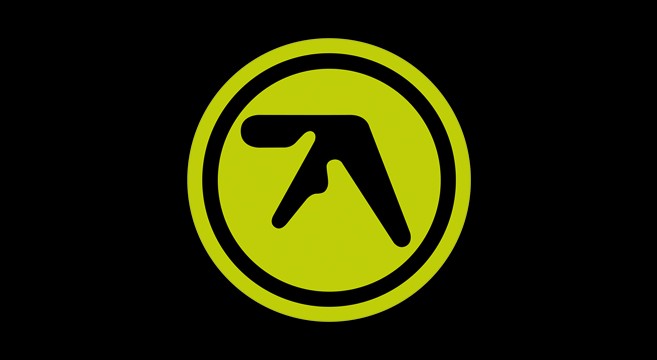 After a weekend of cryptic Aphex Twin “messages” being found scattered around London and New York, the legendary composer has officially announced the release of his next album.  He took to Twitter on Monday and posted a URL which links to Tor, the shadow Internet which is used primarily for the Web’s most secretive activity.  Once opened, the page reveals two images: 1) a collaged photo of Richard D. James’ face and a yellow/black Aphex Twin logo, and 2) a tracklist for the album.  Entitled SYRO, the album is Aphex Twin’s first full-length LP since his 2001 release of Drukqs.  (You can see a standard website with the same info, except for the title and tracklist, by CLICKING HERE).

Yesterday I came across a nostalgia-heavy clip of Aphex Twin being interviewed by MTV UK’s “Party Zone” in 1996 during his appearance at the Big Love Festival in Oxfordshire (where Underworld apparently stole the show later on in the evening), and you can watch it in full below.  Apart from getting a glimpse of him building his reputation as a little brat, the interview also gives us a terrific glimpse into his creative process at that time in his career.  Rightfully described by the Guardian as “the most inventive and influential figure in contemporary electronic music”, we’ve come to know as much as we possibly can about this reclusive artist over the past 23 years.  In an effort to learn more, I found this list of the Top Ten things you maybe didn’t know about Aphex Twin courtesy of the team at CLASH Music (follow CLASH on Facebook and Twitter):

1) He was born in Ireland as Richard D. James. Fewer know that his adopted name was taken from Aphex Systems Limited, a brand of audio single processing equipment. Twin, he says, is in memory of his older brother who died at birth, who was also named Richard James. 2) When he was paid to do a remix of a track by The Lemonheads, he lost track of the time. Submitted was a disk with random beats on it, James claiming he had used one note from the song and sped it up. 3) The double album ‘Drukqs’ was released in 2001. He had previously said he would only compose music for his consumption. However, when a laptop with hundreds of tracks was rumored to have been stolen, fearing they would end up on the Internet, he released them.4) James once went five weeks without sleeping. According to him, doing this all your life would make living to be a hundred the equivalent of living to two hundred. He does it to make music. “Your mind starts getting scatty, like you’re going senile” he says. “You start doing unpredictable things, like making tea but pouring it into a cereal bowl.”5) He was willing to do a Madonna remix (she was begging) but only if she did an impression of a pig on the track. Once an unnamed female pop artist requested a remix and was flatly ignored. She flew to London and tracked him down. AT agreed, on condition that she recorded a quota of noises with her genitalia.

6) Aphex Twin wears his ‘Come To Daddy’ silicone mask in bed to scare his girlfriend. He puts the cover over himself, then cuddles up to her and waits until she turns around. Originally they cast his face, but this didn’t work; they looked “like I was taking a dump”. 7) James remixed a Craig David track just to irritate him. He called it a “total aggro thing…just to fuck him off”. The track was ‘7 Days’. Though his official discography lists over sixty remixes, James has been quoted as saying that he has much more material unreleased than in the public domain. 8) When he was a kid he would play the piano, but from the inside – messing with the wires and hammers under the lid of their family piano; setting the pace for an irreverent relationship with established musical forms from a tender age. Later, for ‘Drukgs’, he would draw on piano compositions by Satie and Cage. 9) He makes scores of his favourite films, taking out obtrusive scores and re-soundtracking films like The Shining. He has slowly been working through his video collection. Although he has no prognosis for the future of electronic music, he is very clear that the merging of audio and visual is essential. 10) We all know how he likes military gadgets – tanks/helicopters/submarines. He once went up in a plane early in the morning after a night out partying on speed and weed. He was taken out by a pilot with a bright red nose who James is convinced was wasted. 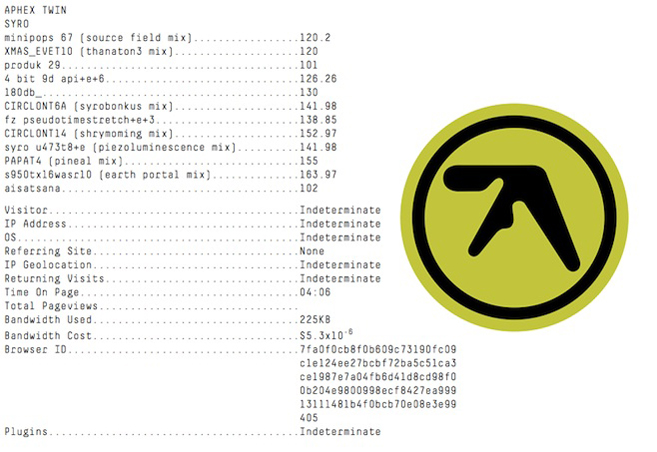