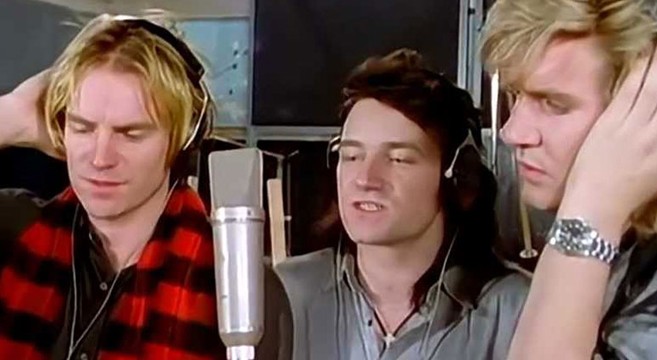 Top 16 Things You Didn’t Know About Band Aid’s 1984 Recording Of “Do They Know It’s Christmas?”

In 1984 Bob Geldof produced the charity recording of “Do They Know It’s Christmas?” to raise funds for The Band Aid Trust for Ethiopian famine relief.  The song became an international smash hit, inspiring other countries to come to Africa’s help as well — with America releasing “We Are The World” (produced by Quincy Jones), and Canada releasing “Tears Are Not Enough” (produced by David Foster).  Geldof’s “Do They Know It’s Christmas?” is without question the most powerful of the three, and still gives listeners goosebumps nearly 30 years after its release.  But as with each great recording in music history, “Do They Know It’s Christmas?” is loaded with backstory.  Here are the Top 16 things you didn’t know about the iconic song:

1. When the song was released, it became the biggest selling single in UK chart history, selling over a million copies in the first week alone.

2. The first singers to record their vocals were Sting and Simon Le Bon of Duran Duran.

3. Boy George was late to the recording session.  When Bob Geldof, who organized the project, called Boy George, he was asleep in New York City.  Geldof ordered him to fly to London by Concorde jet and he arrived by 6pm.

4. Singer Marilyn, who had a hit in 1983 with “Calling Your Name” showed up to the recording session uninvited.

5. The drum track on the song is a combination of an African rhythm, a drum part played by Phil Collins and a sample of the Tears For Fears song, “The Hurting”.  Although they were sampled, Tears For Fears were not invited to participate.

6. Despite the assembly of many huge egos, there was a spirit of harmony and goodwill in the studio, for the most part.  George Michael endured personal attacks from both Boy George and Paul Weller.

7. The song was recorded in a studio that belonged to Trevor Horn of Yes.

8. There was a party atmosphere on the studio with a great deal of drugs and alcohol consumed.

9. The first line of the song was written for David Bowie but was eventually sung by Paul Young instead.  Bowie did sing on the chorus, as did big names like Paul McCartney and Roger Daultrey of The Who.

10. Although the song was very successful and raised well over ten million dollars for Ethiopian famine relief, Bob Geldof who wrote the song, isn’t a big fan.  He has described it as “one of the worst songs in history.”

11. No one can still fully explain the most confusing and contradictory of all lyrics in the song — Bono’s thoroughly inappropriate line: “Tonight thank God it’s them instead of you.”

12. Aside from the mastering, the whole recording was done in around 24 hours straight, going through the night on Sunday, November 25, 1984.

13. Although many of the artists nailed their line in two or three takes (they had to, as there was a tight schedule), Bono was the only act who managed to record his line perfectly on the first take.

14. Phil Collins would have also been somebody to nail his recording duties in the first take, but unfortunately played much, much louder during his take than on the initial level test which distorted the recorded signal.  Fortunately, he drummed absolutely perfectly again on the second run through.

15. Status Quo were notorious practical jokers and during the session, when they spotted the whole of Spandau Ballet making their way to the bathroom downstairs, Quo followed them.  After locking Spandau Ballet in the bathroom for quite some time Spandau had to kick the door out to set themselves free and get back to the session.

16. Boy George requested a bottle of brandy to help ease his sore throat from the previous nights singing in New York.  He took the most amount of takes to get his vocal recorded correctly.

SEE ALSO: 20 Fascinating And Little-Known Facts About The Making Of Tim Burton’s Classic “Edward Scissorhands”
SEE ALSO: 20 Amazing Facts About “The Silence Of The Lambs”: From Buffalo Bill’s Pit At GE, To Kubrick’s HAL, To Dali’s Skull

Previous post:
FEELguide Editorial: The “Duck Dynasty” Controversy And The Moral Reprehensibility Of Evangelicalism Next Post:
“Intelligent Life” On The Powerful Relationship Between Walking And Thinking