Right now, running from May 10 until June 2, is Montreal’s renowned annual Chamber Music Festival, and last night (thanks to my friend Jody) I had the great fortune of attending the second night of Bach’s Cello Suites performed by Colin Carr, the brilliant cello soloist (who also happens to be a professor at the Royal Academy of Music).  There are 6 suites in Bach’s Cello Suites, and the previous night Carr perfromed #2, #4, and #6; and last night he performed #2, #4, and #6.  The performance took place smack dab in the middle of Montreal’s downtown core at the Saint George Anglican Church, and it was a truly magical experience.  No. 2 and no. 4 were amazing, but when the sixth and final suite opened up I found myself one breath away from levitating straight out of my seat.

Bach’s Six Suites for Unaccompanied Cello are some of the most frequently performed and recognizable solo compositions ever written for cello.  According to experts, the suites were most likely composed during the period 1717–1723, when Bach was living in Cöthen, Germany (NOTE: I learned from the hosts that Bach composed these 6 suites upon returning home from a one-month music retreat with his friends only to learn that his wife had passed away while he was away).  The suites contain a great variety of technical devices, an astonishing emotional range, and some of Bach’s most compelling voice interactions and conversations. It is their intimacy, however, that has made the suites amongst Bach’s most popular works today, resulting in their different recorded interpretations being fiercely defended by their respective advocates.  My favorite of the three I heard, No. 6, was actually composed for an unknown 5-string instrument if you can believe it or not.  No one has quite been able to nail down which instrument this actually was, but many believe the mysery instrument was a five-stringed violoncello piccolo — a smaller cello, roughly the size of a 7/8 normal cello.  Regardless, Colin Carr’s cello performance was like quite simply extraordinary, another of the evening’s highlights was Colin’s candid and revealing commentary before each of the 3 suites he performed where he explained how the performance of the suites has evolved through the centuries.  Each of the six suites is broken up into six movements:

Colin explained how long ago, these suites were performed with a much heavier tone — oftentimes performed with a massive organ in a huge cathedral.  He translated this heaviness into his cello with a couple 60-second soundbites of some of the opening bars of each movement, and revealed how he believes this heaviness was not was Bach had intended.  He went on to perform #2, #4, and #6 with the whimsy and airiness he felt Bach would have wanted.  It was breathtaking, and as I said, my favorite was #6.  In Colin’s own words, #6 was Bach’s most “human” of the suites — intended to express the entire spectrum of the most rapturous and beautiful of all human emotions.  Needless to say, it gave me the chills, and although Colin’s performance of Bach’s Cello Suites cannot be found online, I have collected my six next-best performances of each of #6’s six movements, and I have attached them in the following YouTube playlist.

To learn more about all six of Bach’s Cello Suites CLICK HERE.  You can also visit Colin’s website by visiting ColinCarr.com.  An added perk, I must add, was getting to share a few glasses of wine with Carl after the show and ask him all the Bach-related questions I’ve been dying to ask a Bach expert of Colin’s stature.  A truly memorable night.  Thanks Jody! 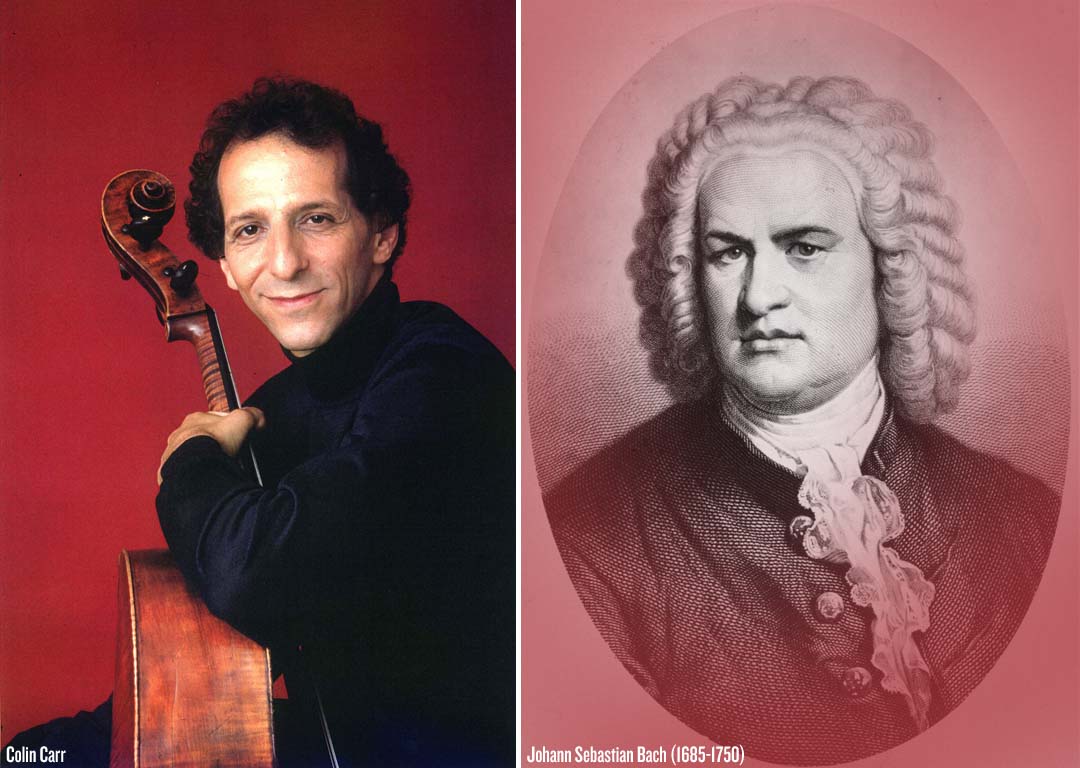