GLEE’s Cover Of “Do They Know It’s Christmas?” Is So Damn Good It Rivals The Original

Say what you will about FOX’s GLEE, the show has consistently managed to pump out the slickest, highest quality covers of the past few years.  Ryan Murphy, the show’s creator and Executive Producer, is renowned for working these kids to the bone and getting the very best out of them, and every now and then one of their songs gets released that stops me dead in my tracks.  Yesterday I came across their cover of “Do They Know It’s Christmas?” and I was so captivated that I almost forgot about the four months of pure cold-as-fucking-hell that lies ahead of us Montrealers in this God forsaken frigid sack of shit winter city from January to April.  Ugh — but I digress.

“Do They Know It’s Christmas?” was written by Bob Geldof and Midge Ure in 1984 to raise money for relief of the 1983-1985 famine in Ethiopia.  Produced by Ure, the song was released by Band Aid on 29 November 1984.  The famine first came to Geldof’s attention during an October 1984 BBC report by Michael Buerk which profiled the famine that had hit the people of Ethiopia.  Bob Geldof saw the report and wanted to raise money so he quickly called Midge Ure from Ultravox and together they quickly co-wrote the song.  Geldof kept a November appointment with BBC Radio 1 DJ Richard Skinner to appear on his show, but instead of discussing his new album (the original reason for his booking), he used his airtime to publicize the idea for the charity single, so by the time the musicians were recruited there was intense media interest in the subject.

Geldof put together a group called Band Aid, consisting of such musicians as David Bowie, Paul McCartney, Boy George, U2, etc. The 1984 original became the biggest selling single in UK singles chart history, selling a million copies in the first week alone. It stayed at Number 1 for five weeks, becoming Christmas number one, and sold more than 3.5 million copies domestically.  It remained the highest selling single in UK chart history until 1997, when Elton John’s “Candle in the Wind 1997” was released in tribute to the late Diana, Princess of Wales, which sold almost 5 million copies in Britain.  Following the release of “Do They Know It’s Christmas?” in December 1984 and record sales in aid of famine relief, Geldof then set his sights on staging a huge concert, 1985’s Live Aid, to raise further funds. 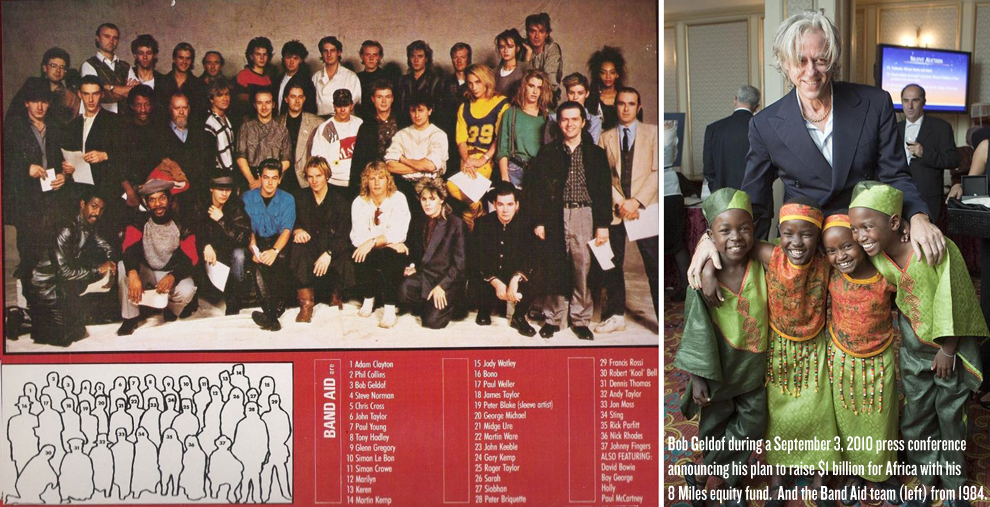