The True Story Behind Pink Floyd And “The Wizard Of Oz”

This pairing produces moments where the film and the album appear to correspond with each other. The title of the music video-like experience comes from a combination of the album title and the film’s song “Over the Rainbow”. Band members and others involved in the making of the album state that any relationship between the two works of art is merely a coincidence.

Pink Floyd band members have repeatedly insisted that the reputed phenomenon is coincidence. In an interview for the 25th anniversary of the album, guitarist/vocalist David Gilmour denied that the album was intentionally written to be synchronized with Oz, saying “Some guy with too much time on his hands had this idea of combining Wizard of Oz with Dark Side of the Moon.”

On an MTV special about Pink Floyd in 2002, the band dismissed any relationship between the album and the movie, saying that there were no means of reproducing the film in the studio at the time they recorded the album.  In a 2003 interview with Rolling Stone, ‘Dark Side of the Moon’ engineer Alan Parsons said of the supposed effect:

“It was an American radio guy who pointed it out to me. It’s such a non-starter, a complete load of eyewash. I tried it for the first time about two years ago. One of my fiancee’s kids had a copy of the video, and I thought I had see what it was all about. I was very disappointed. The only thing I noticed was that the line “balanced on the biggest wave” came up when Dorothy was kind of tightrope walking along a fence. One of the things any audio professional will tell you is that the scope for the drift between the video and the record is enormous; it could be anything up to twenty seconds by the time the record’s finished. And anyway, if you play any record with the sound turned down on the TV, you will find things that work.”

On the cover of the band’s 1995 live album Pulse in the background, can be seen a bike with a basket on it and a girl with ruby slippers, both references to The Wizard of Oz. Some fans have construed this as the band subtly confirming the theory.  Pink Floyd drummer Nick Mason stated categorically to MTV in 1997, “It’s absolute nonsense, it has nothing to do with The Wizard of Oz. It was all based on The Sound Of Music.” 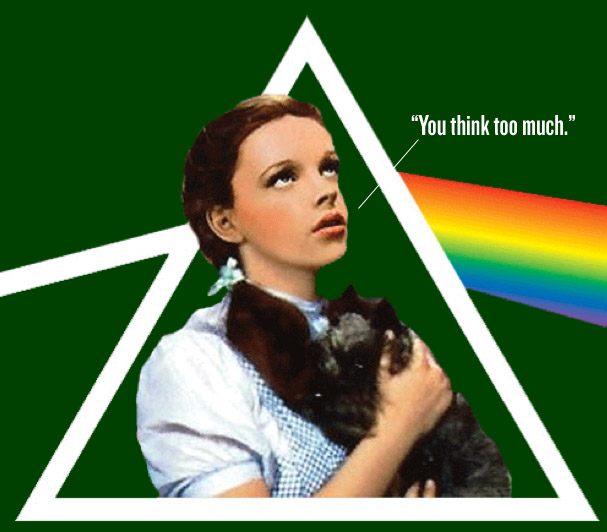