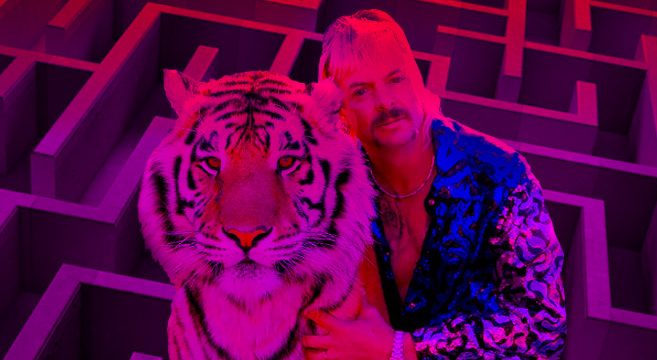 By this point, the entire world has heard of Tiger King, Netflix’s smash hit docuseries about Joe Exotic (born 1963 in Kansas), a flamboyant, gun-totin’, gay Southern redneck who opened an exotic animal park (mostly a tiger petting zoo of over 200 tigers) in Oklahoma in 1999. Nothing short of an unapologetically delicious freak show, Tiger King is a captivating, eyes-glued-to-the-screen MRI of redneck Americana at its very best (and worst). The show takes many bizarre twists and turns, but one thing is true above all: the heart and soul of the series is Joe.

The full wattage of Joe Exotic’s eccentric personality is something that doesn’t fully sink in until you’ve absorbed all seven episodes. From his two meth-fueled, 20-something husbands, to his tiger obsession, to his sequin wardrobe, to his collection of hand guns and rifles, to his obsession with the anticipated destruction of his nemesis Carole Baskin — this man is the flawed antihero of the century. His complexities and contradictions are matched only by his obsessive drive and boundless narcissism. “It’s possible people need a really flawed person to humanize right now,” says Matt Brim, professor and author of Poor Queer Studies, in an interview with The Guardian‘s André Wheeler. “Brim says the love for Joe might be more complicated than it immediately appears to be. ‘What is the calculus here? For some viewers, Joe Exotic’s rural white queer class identity may be his flaw, so that looking past or accepting it signals tolerance, that most passive-aggressive of power plays. For other viewers, those same qualities – in their specific and unwieldy combination – may represent the very soup of our common dilemma. One thing’s for sure: we’re not in South Bend any more,’ he said, referring to the city where the former Democratic presidential candidate Pete Buttigieg was mayor.”

At first glance, one might sum up the take-home message of the show as a powerful warning against the mistreatment of captive wild animals. Some might simply consider it a wild ride — another towering example of truth being stranger than fiction. But if you look closely enough, you will discover a moment in the series that will stop you in your tracks, and utterly reframe the entire context of Joe’s life story and perhaps the most powerful message of the series. For me, it wasn’t until a full five days had passed since I’d watched the final episode that I connected the dots. That moment happens in the very first episode, around the 17:42 mark, when Joe opens up about the darkest moment of his youth:

“At the age of 13, I knew I was gay,” Joe explains. “And I had a bad time struggling with it. When my father found out, he made me shake his hand in front of my mom and promise not to come to his funeral. So, I had a real issue dealing with that, and one night I drove my car off a bridge. I broke my back and spent five years in braces. I went to Florida to do my therapy and my neighbor was the manager of Lion Country Safari. And he brought home all the baby lions and baby monkeys and stuff at night to bottle feed. And that’s where my attraction to exotic animals really started in. I know that they have a heart and a soul and a mind. I’ve learned from them, and they do therapy for me. But the animal rights people, they keep sayin’ I can’t have these tigers.”

If you’re a fan of the show, then I want you to read that paragraph at least one more time to fully take in its scope, because everything else that happens afterwards connects back to this. Every single bit.
.

He Was Repeatedly Raped At The Age Of Five

One tragic detail that does not appear in the series is the fact that at the age of five, Joe was repeatedly raped by an older boy. “Humans, Joe learned early, can be the cruelest of all God’s creations. When he was 5-years-old, he says he was repeatedly raped by an older boy. This happened in his own home. He vividly recalls how a drawer in the bathroom could be opened to prop the door shut,” writes Robert Moor of the New York Intelligencer. “It could have locked in a younger-older template for how one engages in connection with other people that might have lasted into his adult life,” theorizes Dr. Kirk Honda in the podcast The Psychology of Tiger King. “He tended to date younger [men]; not always, but often did. Also, what his sexual abuse from an older boy might have taught him … is that exploitation of vulnerable people is acceptable. You also develop a sense that you’re not valuable enough for other people not to hurt you. You emerge from the experience thinking that you’re not worth much.”

“There are many coping styles children can use to deal with [the trauma of being raped], but one style is to develop narcissistic personality disorder,” explains Dr. Honda. “They develop a sense that nobody can be relied on, so they rely solely on themselves. People like this tend to have their own business, and have a lot of grandiose ideas about themselves, because in order to survive you have to believe certain things that are not necessarily true (i.e. I don’t need anybody else, or I’m better than everybody else, or I deserve more than other people, etc.) You have to develop these beliefs because there are so many needs that were going unmet. You develop this disorder out of feelings of deep unworthiness [which is a world of difference away from merely having low self esteem].” Dr. Honda adds, “The data from the series, however, does not indicate that Joe Exotic was very high up on the NPD spectrum; he was somewhere in the mid-range.” Scientology founder, L. Ron Hubbard, for instance, was someone who was at the very top of the spectrum.

When Joe is rejected by his parents when he came out at the age of 13 (as mentioned above, Joe’s dad made him shake his hand in front of his mom and promise never to come to his funeral) he drove his car off a cliff and tried to kill himself. In Florida where he was recovering, the neighbor was the owner of a nearby wild cat safari, and he would bring Joe the baby cubs and monkeys to bottle-feed at night. “We all have a need for closeness, security, and attachments, and when we give up on humans, sometimes animals are a very worthy alternative,” explains Dr. Honda. “These animals can’t abandon him, they can’t sexually abuse him, they can’t harm him in any way; they’re cute and cuddly and you hold them close and you get all of your physical intimacy needs through animals.

At some point, Carole Baskin and PETA threaten to take away his secure attachment to these tigers and cubs. Not only do his tigers represent the security of his livelihood, but Carole and PETA are also accusing him of mistreating his animals, and are threatening to pass legislation to make his love for these tigers illegal. Carole Baskin, whom Joe might have some sort of mother-transference or parental-transference with (because Carole has the power of the government) triggers another coping mechanism that sexually abused children develop — that all forms of authority are threatening, and should be rebelled against.

Tigers Symbolize The Feminine Qualities Of His Sexuality

A few years ago I wrote a piece entitled Hunting Linked To Psychosexual Inadequacy & The 5 Phases Of A Hunter’s Life Of Sexual Frustration, where I explored what’s going on inside the unconscious mind of a hunter. “In Killing The Female: The Psychology of the Hunt, author Merritt Clifton writes, ‘Whether or not hunters shoot deer to demonstrate sexual potency or out of sexual frustration, in symbolic lieu of raping and killing women, there can be little doubt that as a social ritual, much hunting is all about killing the feminine in the hunter’s own self.’ Clifton continues, ‘Not only are the targets male animals with the stereotypical female traits of grace and beauty, but the pursuit itself involves — nay requires — sequestering the hunters, the men, away from female influence. Deer camp is an all-male world. Instead of cleansing themselves as women require, as prelude to sexual contact, deer hunters cover themselves with ‘scent lures,’ a polite name for urine and feces. They don’t wash because detergent residues reflect ultraviolet light that deer can see, making camouflage useless. They wear boots indoors, curse, play poker, drink from the bottle and eat from the can — and many never actually hunt at all, getting no closer to a deer than viewing a so-called stag video. ‘I went with five other guys,’ ostensible hunter Steve Costello told a New York Times correspondent last fall. They didn’t even take weapons. Admitted Costello, ‘We never even left camp.’” It’s possible that Joe Exotic’s love for tigers was an unconscious method of embracing his homosexuality and the feminine side of his sexuality.

Another peak moment in Joe Exotic’s narcissistic personality disorder was his music hobby. None of the singing you hear in his music videos, however, was from him. He paid a songwriter in Washington state to write and record the songs. Each time you see him in the videos he is lip-synching. His need for attention was so great that he went to these extraordinary lengths to be seen. Another component of this disorder is that the person tends to go so far overboard in the desperate need for attention that they often end up shooting themselves in the foot, getting caught in a lie. Donald Trump is a perfect example of this. In the 1980s he would often call up tabloid journalists pretending to be ‘the publicist of Donald Trump,’ telling grandiose stories that would end up in the press. It was a huge risk and he eventually was discovered to be lying.

In Hunting, Meth and Big Cats: Tiger King’s Rarely Seen Version of Southern Queerness, André Wheeler writes, “Representation of queerness in red states has always been sparse and complicated. The portrayals often face accusations of being exploitative or overly simplistic. A recent one was John B. McLemore of the hit podcast series S-Town. McLemore was a queer horologist living in Woodstock, Alabama, a small, conservative place he hated. Critics called the podcast ‘voyeuristic’ and irresponsible for outing McLemore after his death. Netflix’s Queer Eye occasionally chooses LGBTQ+ subjects living in conservative locales for its transformations, and the show’s format – ‘fix all your problems in an hour’ with a group of affluent, pro-consumption coastal gay men – has drawn scrutiny. Does the novelty of a complicated figure such as Joe Exotic expose our preferences for coastal queer narratives? ‘Yes,’ says John Howard, professor and author of Men Like That: A Southern Queer History. ‘For 25 years, scholars have criticized a bicoastal bias in US queer history that has focused attention on east and west coast metropolitan areas. But this is changing.’ Howard points to the conversations Tiger King is producing. ‘Let’s hope the public debate expands. Perhaps we’ll learn more about working-class queers and trans people of color who, as yet, remain at the margins of Joe’s narrative.'”
.