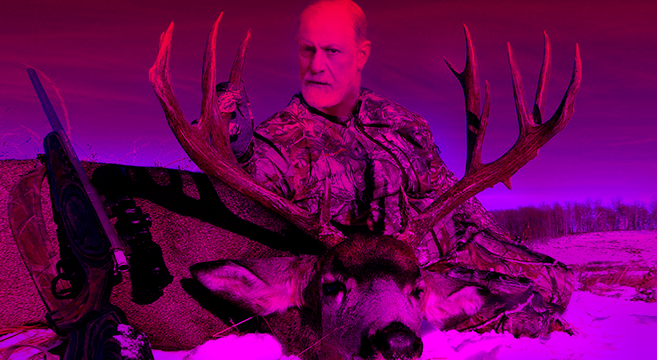 In his book, What Is Sport: A Controversial Essay About Why Humans Play Sports, social psychologist Rob Alpha explains how researchers with the Genetic Economic Analytics Group found the neurophysiological link between sex and a man’s desire to hunt. It turns out the same regions of the brain that are activated in the sex drive and orgasm are also activated by the compulsion to hunt and harvest animals. Renowned psychiatrist Dr. Karl Menninger (1893-1990), who was awarded the Presidential Medal of Freedom by President Jimmy Carter in 1981, and is the namesake of the Menninger School of Psychiatry, wrote extensively about the Erotic Sadistic Motivation Theory of sport hunting. “Sadism may take a socially acceptable form [such as deer hunting and deer stalking] and other varieties of so-called ‘sport,'” he writes. “These all represent the destructive and cruel energies of man directed toward more helpless creatures.”

In the groundbreaking 1948 book, Abnormal Psychology and Modern Life, which remains the most authoritative survey of abnormal psychology (renowned for its comprehensiveness, balance of theory and practice, strong research base, clinical sensitivity, and which is also updated annually), the authors state, “Perhaps more directly relevant are experiences in which individual infliction of pain on an animal or another person has given rise to sexual excitement. We have noted elsewhere the connection between strong emotional and sexual stimulation.”

Menninger’s theory was later expanded by other leaders in the field of psychology, including Dr. Joel R. Saper (University of Michigan) who theorizes that hunting “may reflect a profound yet subtle psychosexual inadequacy.” While clinical psychologist Margaret Brooke-Williams adds, “Hunters are seeking reassurance of their sexuality. The feeling of power that hunting brings temporarily relieves this sexual uneasiness.”

During the fall season across North America hunters reach peak “buck fever,” and clinicians report that incidences of domestic violence and wife-beating always peak the day before each species of hunting season opens. If we could peer inside the unconscious mind of the hunter, we would find a Pandora’s Box of repressed sexual issues. In Killing The Female: The Psychology of the Hunt, author Merritt Clifton writes:

.
“Whether or not hunters shoot deer to demonstrate sexual potency or out of sexual frustration,
in symbolic lieu of raping and killing women, there can be little doubt that as a social ritual,
much hunting is all about killing the feminine in the hunter’s own self.”
.

Clifton continues, “Not only are the targets male animals with the stereotypical female traits of grace and beauty, but the pursuit itself involves — nay requires — sequestering the hunters, the men, away from female influence. Deer camp is an all-male world. Instead of cleansing themselves as women require, as prelude to sexual contact, deer hunters cover themselves with ‘scent lures,’ a polite name for urine and feces. They don’t wash because detergent residues reflect ultraviolet light that deer can see, making camouflage useless. They wear boots indoors, curse, play poker, drink from the bottle and eat from the can — and many never actually hunt at all, getting no closer to a deer than viewing a so-called stag video. ‘I went with five other guys,’ ostensible hunter Steve Costello told a New York Times correspondent last fall. They didn’t even take weapons. Admitted Costello, ‘We never even left camp.'”

Of course, if you ask any hunter why they love to hunt, there will never be a discussion of sexual repression, or the “killing of the feminine in the hunter’s own self.” Most won’t even be able to explain their motivation at all. A few of them will, however, make the case for hunting-for-food, but as one former hunter tells Clifton, “You could live on filet mignon for what shooting a deer costs [in license fees, equipment, ammunition, and time.]”

According the the ASSF the average North American hunter’s journey begins at 15-years of age, “just past puberty, at about the same age he begins seeking such other symbolic transitions as learning to drive and gaining his first sexual experience,” writes Clifton. “‘It’s a big thing when you get to go deer hunting,’ Smitherman’s grandson Todd Dennis told The Los Angeles Times. ‘It’s like a bar mitzvah. When you go deer hunting, they start to look at you as a man and you feel like a man.'”

And like so many other rites of passage for the North American male, the urge to hunt is a seed that has been planted by a playbook of cultural masculine norms and behavioral appropriation. And as Robert Jackson and Robert Norton of the University of Wisconsin explain in their well known 1977 report commissioned by the U.S. Fish and Wildlife Service, there are 5 distinct phases of a hunter’s behavioral development. Jackson and Norton found the 5-phase pattern after interviewing 1,600 licensed deer and water fowl hunters. Don Sangster of Bass Pro Shops summarizes them as follows (I have included excerpts from Clifton’s own descriptions in brackets at the end of each 5 as well):

1) SHOOTER STAGE: Hunters at this stage simply want to do a lot of shooting, be it doves, ducks, squirrels, rabbits or even deer, in which case shooting opportunities are acceptable too. They want to test their shooting abilities, as well as that of their rifle or shotgun. These hunters are beginners and are often young as well. (Clifton: Hunters are principally concerned with exercising their firepower [in this phase]; they don’t much care what they hit. Such hunters tend to be young.)

2) LIMITING-OUT STAGE: Eventually, simply burning through a lot of ammunition is no longer sufficient. Hunters at this stage still gain a lot of satisfaction from shooting, but now the number of birds or animals bagged becomes important too, and limiting-out, or filling a tag, is the gold standard. (Clifton: As Kiley theorized, they are not evil but asleep: “A portion of their awareness is obscured.” They go from random killing to the Limiting-Out stage, where satisfaction still comes from firing the gun, but success — and social status — comes from “bagging the limit.” At this stage, Maine Morning Tribune editor Bill Hall writes, “They hunt for the bragging rights on what they kill.”)

3) TROPHY STAGE: Eventually the weight of the game bag becomes less important and the emphasis shifts from quantity to quality. Hunters at this stage gain satisfaction from being selective in taking game, such as a duck hunter who shoots only greenheads, a turkey hunter who only shoots long beards, or a deer hunter who takes only mature bucks. These hunters often travel long distances to hunt trophy animals. (Clifton: Now winning the buck pool becomes a paramount objective. Hunters begin passing up shots, trying instead for the heaviest weight and biggest rack of antlers. Trophy stage hunters are typically in their mid-30s or early 40s, at about the same point in life where basic economic needs have been satisfied and community status is being established. The car and house have been bought and mostly paid for. Raising status through obtaining a newer car and a bigger house are the major economic concerns for this age bracket; killing a bigger buck is an abstraction of the same objective.)

4) METHOD STAGE: For this hunter, taking game is still important, but more important is how that game is taken. True satisfaction comes from the method used to take game, with particular emphasis on more challenging methods such as archery or muzzleloading. This hunter will spend a lot of time scouting and using trail cameras, studying their quarry and practicing hunting skills such as calling and, in the case of a deer hunter, may even choose to target one specific animal. (Clifton: By this phase the hunter has already won the buck pool. He now takes maximum pride in his ability to kill animals by more difficult means, i.e. bowhunting and with muzzleloaders, and in his ability to use woodcraft, i.e. luring and tracking, rather than relying on sheer firepower. Killing the target animal has become the climactic part of a quest.)

5) SPORTSMAN STAGE: After many years in the field, the hunter begins to place the emphasis on the total hunting experience. Being in the outdoors, enjoying the company of friends and family, and seeing nature in all its beauty, now outweigh the need for taking game. These hunters often turn to mentoring other younger hunters for ultimate satisfaction. (Clifton: After years of hunting and a few years of not killing, for various reasons that translate into no longer wanting to, the hunter acknowledges that killing simply isn’t necessary, that nature can be most fully enjoyed by simply sharing in the life of the woods. As Jackson and Norton summarized, the phase five hunter “seemed to be more fully mature as a person and as a hunter, and no longer needed to measure his worth, or control his world, by the taking of game. Instead he talked of hunter satisfaction in terms of total appreciation of nature or the companionship of partners or family.” Many an animal defender has found friendship and even emotional kinship with elderly ex-hunters, some of whom become volunteer wardens or in other ways seek to protect the animals they once would have killed. “I consider it a successful hunt if we just see deer,” 63-year-old Cecil Smitherman told Bob Secter and Tracy Shryer of The Los Angeles Times last fall.) It’s worth noting that as desire for hunting decreases after the age of 45, it matches the predictable decrease in testosterone levels as well.

Clifton goes on to connect the dots between the atmosphere of hunt camps and the atmosphere of gay leather bars. He quotes hunting guide Douglas Townsend who, after a career of escorting hundreds of big game hunters, famously said, “You can take my word for it — This hunting habit is anything but an expression of manhood.”

But perhaps the most telling connection between deer hunting and psychosexual behavior comes from the semantics of the technical term for deer meat — venison. As Dave Petersen explains in his column Deer-Hunting For Beginners, written for Mother Earth News, “Consider that the term venison, for the meat of the deer, is derived from the name of Venus, the Roman goddess of love,” he writes. “Other English terms sharing the same derivation are venerate (i.e. to regard with reverential respect or with admiring deference), venery (which means both ‘the art of hunting’ and ‘the pursuit of sexual pleasure’), and venial (‘meriting no particular censure’). Not to mention good old venereal, which, I suppose, needs no introduction (sounds like the stuff of a graduate-school thesis, ‘Buck Fever; Venereal Disease?’)” Kind of gives a whole new meaning to the term “First Blood,” doesn’t it?