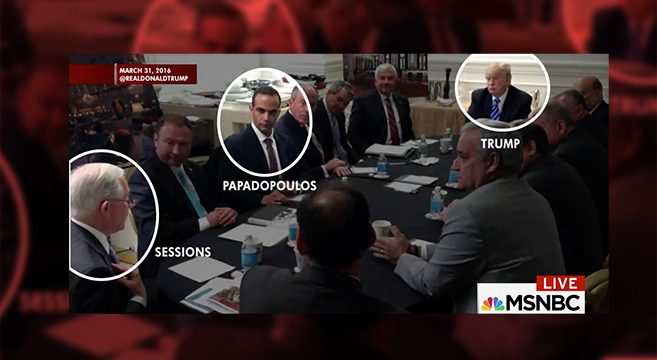 The Wire: Why This March 31st Photograph Sent Chills Up Trump’s Spine On ‘Mueller Monday’

Yesterday’s public reveal of the indictments against former Trump campaign chair Paul Manafort, and Manafort’s business associate Rick Gates, had President Trump glued to his TV sofa in the White House’s third floor residence yesterday morning. With each passing hour, West Wing staff were growing increasingly concerned why the President was not coming downstairs to start the day. The reason is because Trump was terrified of who exactly was being charged. Nearly an hour after news broke Monday morning that Manafort and Gates were in the hands of the F.B.I., a third and unexpected shoe dropped that likely sent the orange hair on the back of the President’s neck stand straight on end.

When it was announced that former Trump advisor George Papadopoulos had been arrested in late July for lying to the F.B.I., two things would quickly become clear: he had reached a plea agreement with Special Counsel Robert Mueller, and Papadopoulos was a cooperating witness. Harry Litman of The New York Times writes: “For all of the talk about collusion with Russia since Mr. Trump’s election, this is by far the most damning evidence of it. For starters, the plea describes Mr. Papadopoulos’s efforts to gather negative information on Hillary Clinton from officials in the Russian Foreign Ministry and a professor with ties to Russia who told Mr. Papadopoulos that Moscow had ‘thousands of emails’ of ‘dirt’ on Mrs. Clinton. This paints perhaps the clearest picture so far of Russia’s attempt to provide assistance to the Trump campaign — and the willingness of at least some campaign staff members to accept that assistance.”

The fact that Papadopoulos has been cooperating with Mueller’s investigation since late July led most analysts to the conclusion yesterday that he has likely been wearing a wire all this time, ensnaring as many of his former colleagues in recorded conversations as possible. And as Morning Joe revealed earlier this morning, it’s news of Papadopoulos’s cooperation, combined with a photograph from March 31, 2016, that almost certainly meant President Trump did not sleep a wink last night.
.

What is the message Mueller is sending with his indictments? What is Manafort’s next step? Law professor Ryan Goodman, Matthew Miller and Dr. Evelyn Farkas discuss the latest details.

Previous post:
How to Arrange Your Ultimate Travel and Tour Plans Next Post:
5 of the Very Best Fictional Pubs That Have Appeared on the Big Screen