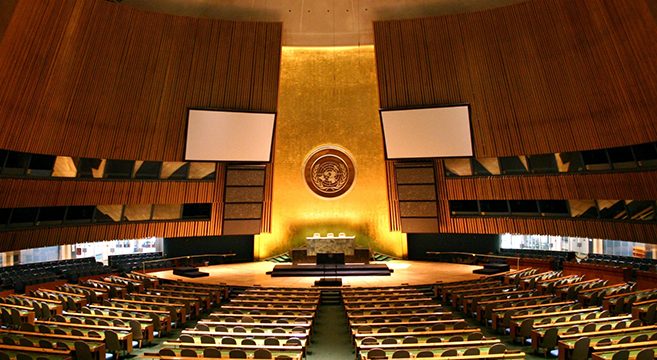 Article 13 of the United Nations’ 1948 Universal Declaration of Human Rights states the following: “Everyone has the right to freedom of movement and residence within the borders of each state. Everyone has the right to leave any country, including his own, and to return to his country.” Hold this idea in your head for a brief moment and you will soon realize why Donald Trump’s isolationist policy of sealed borders is in violation of this universal agreement. But even more importantly, Trump’s immigration policy and rhetoric of blocking specific ethnic and religious groups from entering the United States is not just a violation of a global United Nations agreement — it contradicts everything we’ve learned about what is essential to human nature and well-being.

“Liberty of movement is an indispensable condition for the free development of a person.” This is the Freedom of Movement amendment adopted by the United Nations Human Rights Committee and the International Covenant on Civil and Political Rights in 1999. The idea that freedom of movement is indispensable to one’s personal development raises an interesting point when you place it in the context of our globalized and interconnected world. While the powers-at-be obsess over the importance of “development” with regards to capitalism and economics, it’s important to champion the benefits of a much more important kind of development — the development of our hearts, minds, souls, intellect, and interconnectedness as a species at large.

What would happen if the world gave as much importance to the latter as it did to the former? What would happen if we took Article 13 much more seriously with regards to the benefits our society could reap if we implemented a global travel initiative aimed at nurturing the better angels within ourselves. After all, there are far more things that unite us than divide us. It’s time to celebrate this unity by taking Article 13 seriously once and for all.

“In April, 2010, the European Union (EU) declared that travel and tourism is a basic human right and introduced a program whereby the EU will subsidize vacations for youth, the elderly, the disabled and for those who are poor,” writes Matt Long of Landlopers. “For those who qualify, the EU will pay for up to 30% of travel costs in order to allow people to travel to places they might not otherwise visit. Those from northern countries will be encouraged to go south and vice versa. Declaring travel a basic right may seem a little outlandish and extreme, but it creates an interesting philosophical question. Should everyone be able to travel? Anyone who has hit the road or boarded a plane in search of adventure and exploration of the world can tell you that the benefits of travel are many. There are the intangible benefits of increased global awareness, emotional growth and ultimately intellectual growth.” Matt continues by praising the enormous physical and mental health benefits of such a program as well.

In his extraordinary new book, Far and Away, Pulitzer Prize-nominated writer Andrew Solomon explains why travel is an essential component to life in the modern world. In an interview with Charlie Rose, Solomon says, “I believe that travel is really a moral imperative and that we live in a globalized world (some people don’t like that but it’s true), and that when we close ourselves off from other places and don’t encounter them and don’t experience them, we don’t understand the world we’re living in and we have a lot of unnecessary fear and we have, ultimately, a lot of serious dysfunction as a result.”

Solomon continues with a wise distinction between tourism and travel. Tourism is one thing, but travel is something entirely its own. And of all its benefits, travel is perhaps most influential in how it shapes the minds of young children. Solomon explains how he and his husband uses travel to help nurture the minds of their 4 young kids in order to help expand their evolving perception of the world around them. “They will grow up with the knowledge that there are different ways to live, and different places to be, and different attitudes to take.” (UN photo via Wikipedia)

SEE ALSO: Congress Must Give Every American One Month Free Vacation To Heal From History’s Most Toxic Election
.

Previous post:
Healthy Life From The Inside Out Next Post:
Redefining Public Relations in the Age of Social Media