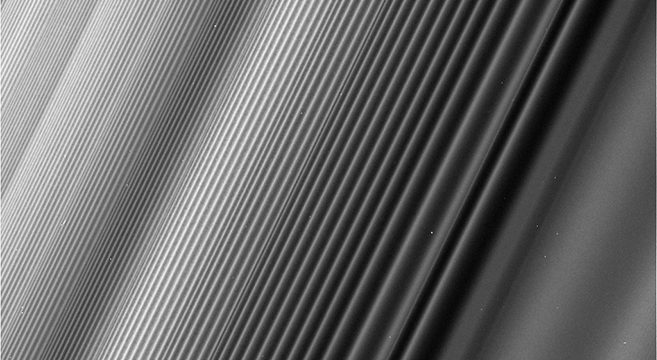 I’ve shared many extraordinary facts about Saturn here on FEELguide through the years, including the most recent one from April 2017 which shows Earth photographed through Saturn’s rings, and the incredible inner secret hiding inside its ocean moon, Enceladus. But just when I think these Saturn updates can’t get any more astonishing, along comes another one to top the last. The newest mind-blower comes courtesy of the Cassini space probe which is nearing the end of its 2-decade journey. NASA writes:

“This view from NASA’s Cassini spacecraft shows a wave structure in Saturn’s rings known as the Janus 2:1 spiral density wave. Resulting from the same process that creates spiral galaxies, spiral density waves in Saturn’s rings are much more tightly wound. In this case, every second wave crest is actually the same spiral arm which has encircled the entire planet multiple times. This image was taken on June 4, 2017, with the Cassini spacecraft narrow-angle camera. The image was acquired on the sunlit side of the rings from a distance of 47,000 miles (76,000 kilometers) away from the area pictured. The image scale is 1,730 feet (530 meters) per pixel. The phase angle, or sun-ring-spacecraft angle, is 90 degrees.”

You can read more at the Jet Propulsion Laboratory’s website. And adding an extra layer of intrigue to the Cassini photo is the team at SYSTEM Sounds who have turned the wave’s structure into audible sound which you can hear below. “Many of Saturn’s moons launch spiral density waves within the rings at the locations of resonances. These are the places where the motions of particles that make up the rings harmonize with the motion of a moon, with both of them executing different numbers of complete orbits in the same time. For example, particles at a 2:1 resonance complete 2 orbits for every 1 orbit of a certain moon. We converted the waves of all the ‘1st order’ resonances of the sister moons Janus and Epimetheus into sound. These moons share an orbit but swap places every four years and this dance can be clearly seen and heard here. Density waves caused by resonances with other moons as well as wakes caused by Saturn’s ‘ravioli’ moon Pan which orbits within the rings are also present.” Press play and you’ll hear how much the waves’ sound resembles that of whales underwater.

SEE ALSO: NASA’s Electromagnetic Recordings From Jupiter, Saturn, Neptune & Beyond Will Give You Goosebumps
.

Previous post:
‘Waves Of Impact’ Group Heals People In Stress & Hard Times Through The Power Of Waves Next Post:
The Law Of Lotus Mud: Why Those Who Suffer The Most Are Most Likely To Reach Enlightenment