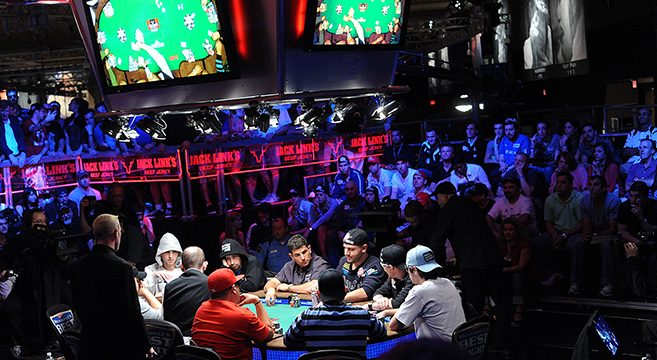 A series of major poker contests is slated to take place in New Jersey. These include the imminent arrival of the WPT (World Poker Tour) in Atlantic City, New Jersey. The Borgata Hotel Casino & Spa will be hosting a leg of the WPT between January 28 and February 2, 2018. The buy-in is $3,300 + $200 = $3,500, for a guaranteed prize pool of $3 million. The Borgata Winter Poker Open runs throughout the latter half of January 2018, culminating in the final on February 2, 2018.

The Borgata is one of Atlantic City’s premier hotel and casino venues, and players and fans can lock in competitive room rates ahead of this upcoming contest. While the total prize pool is $3 million, it will be reduced by $90,000 for dealer tips, according to a new law enacted by the state of New Jersey. The final table takes place on Friday, 2 February 2018 at 14:00. From there, the WPT moves to New York, at Casino Niagara where the $5,000 WPT Main Event takes place between February 10 – February 12, 2018 with shootouts taking place on the 11th and 12th of February.

The WPT Borgata Main Event is a major attraction for the state of New Jersey, and its premier gaming destination, Atlantic City. There are several leading casinos which have partnered with online poker rooms to offer tournaments, online series and generous prize pools. For fans of WSOP/888 poker, it’s important to link their online screen names to their WSOP total rewards account. This adds your poker rake to your loyalty status points. This terrific benefit allows players to rise quickly through the tiers at WSOP/888 and enjoy better rewards, bonuses, promotions and exclusive offers. No new tournaments have been listed for WSOP/888 yet, but new online poker contests will be announced shortly.

For the Borgata, all the attention will be focused on the WPT. One of the premier events being hosted at the Borgata is the $300 Ladies Event which currently serves as the only Ladies Event in New Jersey. The Main Event kicked off on Sunday January 28 2018, with a buy-in of $3,500 and a guaranteed prize pool of $2 million. While the WPT certainly has its fan base around the world, it’s the WSOP that resonates with poker aficionados everywhere. In anticipation of this glittering event this summer, WSOP Nevada is planning to host x4 online poker bracelet events. The growth of interstate online poker (recall the gaming compact between NJ, NV, and DE) will enhance online poker play between states and give rise to much bigger prize pools.

Interest in online poker bracelet events for the WSOP has grown significantly in recent years. For the WSOP 2018 series, there are currently 4 exciting events planned. These include the following:

Prizes and Payouts for WSOP Online Bracelet Events over the Years

They won $752,700, $1,335,600, and $1,246,400 respectively. Fortunately, online poker has witnessed strong organic growth rates over the years, thanks largely to a relentless marketing campaign that has seen player numbers gradually improve since online gaming legislation was adopted in 2013. People in New Jersey, Nevada, and Delaware have increasing awareness of online poker games and tournaments, and the software has been fine-tuned to perfection.

Everyone is excited about the WSOP Main Event scheduled for the Rio All Suites Hotel & Casino over the summer. That is regarded as the premier poker contest of the year, and thousands of contestants will be vying for their share of the poker pie. The online and land-based poker series is now perceived as one and the same, and players are taking to it in their droves. The online poker contests are a terrific option for recreational players (casual players), and grinders to pit their poker playing smarts against the competition.

Since the gameplay at the Rio is where the big money changes hands, the online arena offers a little respite to poker fans. It remains to be seen when the multi-state poker compact will come into play for New Jersey, Delaware and Nevada. The bill was signed, but it has yet to be officially adopted. New Jersey officials are working hard to get things done, and much the same is true with gambling authorities in NV and DE.

As far as attendance numbers go, it is expected that 1,500 entrants will participate in the $1,000 buy-in on Friday, June 29, 2018. But, if interstate play is approved before the summer, that number could swell multiple times. However, the players that are signed up for the high roller event such as event #63 on Saturday, June 30, 2018 will likely already be in Las Vegas, and so those numbers are expected to remain stable despite interstate gambling compacts.

Previous post:
The World’s Best Casino Hotels Next Post:
In Search Of Romance: Acquaintance With Girls In Video Chat