Most Cited Legal Scholar In U.S. Talks To Charlie About His Book “The World According To Star Wars”

Cass R. Sunstein is the Robert Walmsley University Professor at Harvard Law School, where he is the founder and director of the Program on Behavioral Economics and Public Policy. He is by far the most cited law professor in the United States. From 2009 to 2012 he served in the Obama administration as Administrator of the White House Office of Information and Regulatory Affairs. He has testified before congressional committees, appeared on national television and radio shows, been involved in constitution-making and law reform activities in a number of nations, and written many articles and books, including Simpler: The Future of Government and Wiser: Getting Beyond Groupthink to Make Groups Smarter.

Sunstein’s latest book is entitled The World According To Star Wars. The book is described as follows: “There’s Santa Claus, Shakespeare, Mickey Mouse, the Bible, and then there’s Star Wars. Nothing quite compares to sitting down with a young child and hearing the sound of John Williams’s score as those beloved golden letters fill the screen. In this fun, erudite, and often moving book, Cass R. Sunstein explores the lessons of Star Wars as they relate to childhood, fathers, the Dark Side, rebellion, and redemption. As it turns out, Star Wars also has a lot to teach us about constitutional law, economics, and political uprisings.

“In rich detail, Sunstein tells the story of the films’ wildly unanticipated success and explores why some things succeed while others fail. Ultimately, Sunstein argues, Star Wars is about freedom of choice and our never-ending ability to make the right decision when the chips are down. Written with buoyant prose and considerable heart, The World According to Star Wars shines a bright new light on the most beloved story of our time.” Sunstein sat down with Charlie Rose to discuss the book and you can watch it in full above.

SEE ALSO: The Powerful Mythological & Religious Themes Embedded In STAR WARS
SEE ALSO: How “STAR WARS”, “Interstellar” & More Embraced Hinduism Without You Even Noticing
SEE ALSO: The Jedi Force: How The Philosophy Of Mindfulness Gives STAR WARS Its Eternal Truth Beyond The Hype
. 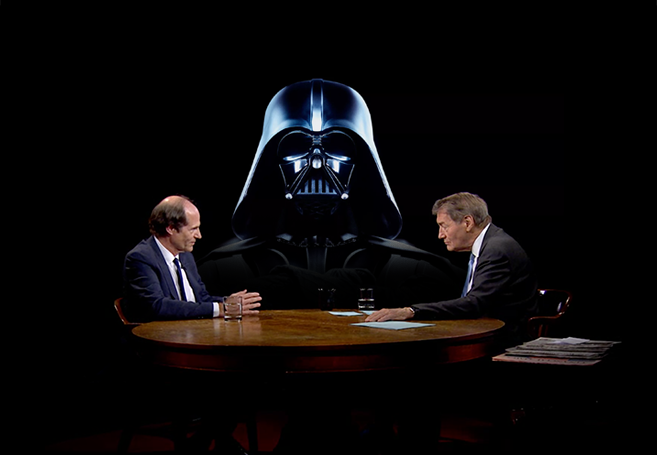