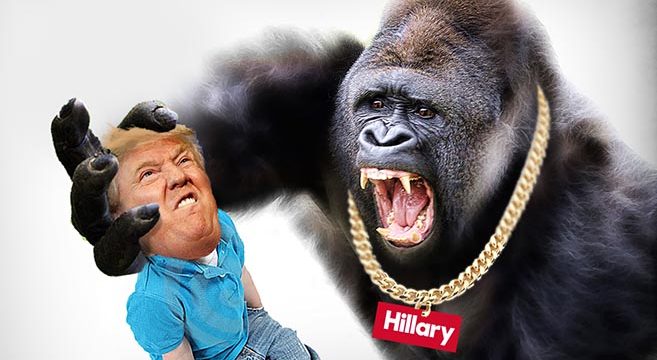 This past week will be remembered as the week Donald Trump lost the election. Not only did Hillary Clinton crush his head like a coconut in an epic, no-holds-barred, TKO speech (watch below in video #1) — she also proved why Donald Trump is in waaaaaaaay over his head. Since June 2015 when he announced his candidacy, Trump’s antics have made mincemeat of his Republican opponents. But the benefits he has reaped with his “unconventional” campaign style came to an abrupt end when he became the official GOP nominee.

Clinton easily handed Trump’s ass to him on a silver platter during her 30-minute takedown — one that will undoubtedly be placed on the top shelf amongst the other landmark speeches she’s given in her career, possibly right beside her groundbreaking September 1995 speech in Beijing on women’s rights. Renowned journalist, Jeffrey Goldberg, sat down with CBS This Morning to explain exactly why Clinton’s speech was so powerful, and you can watch the roundtable discussion below in video #2.

But Clinton’s speech was just one reason why this week will be seen as the week Trump’s campaign was officially flushed down the toilet. Trump’s disturbing and racist comments against the federal judge overseeing the Trump University fraud case have been unanimously condemned by his GOP colleagues, adding even more nails in the coffin of his delusional White House dreams.

This week will also be remembered as the turning point for the mainstream media, which has — up to now — given Trump a free pass. In a brilliant editorial written for BillMoyers.com entitled Is The Media Recalculating How It Covers Trump?, noted scholar and author, Todd Gitlin, writes:

“Do my eyes deceive me, or are cable TV reporters — like drivers who’ve taken a wrong turn and suddenly pull off the road to take a good hard look at the GPS — recalculating their approach to Donald Trump? Wouldn’t it be pretty to think so? A swerve in the mainstream TV approach is long overdue. As I wrote recently at The Washington Post, Trump benefited from many easy months of piling up attention while emitting pungent sound bites and swatting away demurrers like flies. But there are some welcome signs of improvement. In recent days, the questions are coming thicker and faster.”

Also this week in an article entitled Trump Has a Conflict-of-Interest Problem No Other White House Candidate Ever Had, Russ Choma and David Corn of BillMoyers.com wisely pointed out that Trump has a major problem looming on his political horizon. “Trump owes at least $100 million to Deutsche Bank, which lobbies heavily in Washington on banking regulations like Dodd-Frank. If Trump were president, would his debts influence how his administration treats the big banks?” You can read the full story at BillMoyers.com.

But no path to the White House is possible without financial fuel, and Trump all but blew up his own gas tank this week when he blasted New Mexico Governor, Susana Martinez — who so happens to be the Chairman of the Republican Governors Association, the most important fundraising arm any GOP candidate’s election campaign. By doing so, Trump sabotaged an unspeakable amount of cash from Republicans who took offense to his comments. He quickly realized he made a major no-no, but the damage was already done.

However you slice it, watching Trump campaign against Hillary Clinton is a lot like watching a dumb little boy wander into a forest filled with silverback gorillas. He hasn’t the slightest clue what he’s up against, and it’s certainly going to be entertaining to watch him get torn to pieces over the next several months.