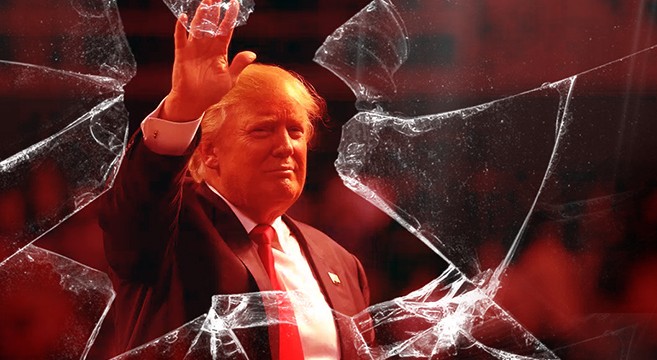 Joseph P. Overton was a former vice president of the Mackinac Center for Public Policy. Even since his death in 2003, Overton’s philosophies — which explore the convergence of politics, media, and democracy — have remained some of the most universally adopted among political scholars, policy makers, and think tanks in the United States.

Overton was best known for devising the Overton Window Theory, which claims that an “idea’s political viability depends mainly on whether it falls within the window, rather than on politicians’ individual preferences. According to Overton’s description, his window includes a range of policies considered politically acceptable in the current climate of public opinion, which a politician can recommend without being considered too extreme to gain or keep public office.” 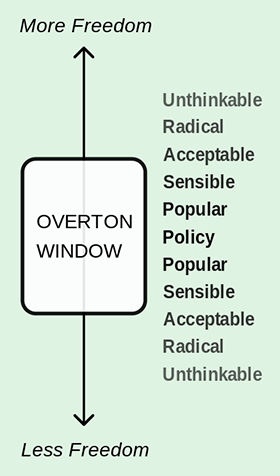 The theory is charted in the image to the left. The Mackinac Center for Public Policy explains: “At any one time, some group of adjacent policies along the freedom spectrum fall into a ‘window of political possibility.’ Policies inside the window are politically acceptable, meaning officeholders believe they can support the policies and survive the next election. Policies outside the window, either higher or lower, are politically unacceptable at the moment. If you shift the position or size of the window, you change what is politically possible.

Many believe that politicians move the window, but that’s actually rare. In our understanding, politicians typically don’t determine what is politically acceptable; more often they react to it and validate it. Generally speaking, policy change follows political change, which itself follows social change. The most durable policy changes are those that are undergirded by strong social movements.

For example, prohibition was a policy change driven by a social movement that did not prove strong enough to sustain the policy. Certain environmental policies that have proven durable are backed by strong social movements that favor those policies — or at least the idea they represent.

When social and political forces bring about change, the window of political possibility shifts up or down the spectrum and can also expand to include more policy options or shrink to include fewer. The window presents a menu of policy choices to politicians: From their point of view, relatively safe choices are inside the window and politically riskier choices (or bolder ones, if you prefer) are outside.

Lawmakers who support policies outside the window are one of two kinds – true leaders who have the rare ability to shift the window by themselves, or politicians who risk electoral defeat because they are perceived as out of touch. This explains why key lawmakers in 2009 and 2010 were reluctant to support a massive federal health care bill seen as unpopular with the people. Officeholders knew a vote outside the window would subject them to the political Furies that are playing out at the time of this writing.

The Overton Window doesn’t describe everything, but it describes one big thing: Politicians will rarely support whatever policy they choose whenever they choose; rather, they will do what they feel they can do without risking electoral defeat, given the current political environment shaped by ideas, social movements and societal sensibilities.”

Enter Donald Trump on the political stage, a man who has thoroughly defied the Overton Window with his buffoonery, his cringeworthy tongue, and his reprehensible comments about women and immigrants that even the Pope has condemned. Jack Shafter of POLITICO writes, “According to the Overton Window theory, only a narrow range of policies can be considered in the political arena at any given time, so politicians tend to avoid discussing ideas that might be considered ‘unthinkable’ or ‘radical’ by the public and instead pursue ‘sensible,’ ‘popular’ and ‘acceptable’ notions that have a better chance of succeeding. But from time to time, politicians attempt to move or expand the Overton Window, so what once seemed ‘unthinkable’ or ‘radical’ grabs some daylight, and appears in the ‘acceptable’ part of the window. Suddenly, it’s a policy that could happen. Earlier this year, Trump tested the edge of the Overton Window by proposing the mass deportation of 11 million undocumented immigrants, something most regard as technically impossible, if not unthinkable. Now comes his Muslim ban, which is equally unthinkable and possibly even unconstitutional.”

David French of National Review adds, “Then along came Donald Trump. On key issues, he didn’t just move the Overton Window, he smashed it, scattered the shards, and rolled over them with a steamroller. On issues like immigration, national security, and even the manner of political debate itself, there’s no window left. Registration of Muslims? On the table. Bans on Muslims entering the country? On the table. Mass deportation? On the table. Walling off our southern border at Mexico’s expense? On the table. The current GOP front-runner is advocating policies that represent the mirror-image extremism to the Left’s race and identity-soaked politics.” Although National Review is one of the most unapologetically far-right-leaning political journals in America, even they will admit Trump’s success at collapsing the Overton Window could have long-lasting negative consequences. “The shattering of the window reflects the shattering of the American consensus, and the result will likely be deeper polarization, and even less civility, with further strains on the ties that bind our nation together.”

And moments after Trump’s MSNBC town hall on February 17, 2016, Becca Andrews of Mother Jones was left wondering if Trump has finally stunned America into silence. “Or maybe Trump has conquered the Overton Window theory — the range of ideas the public will accept — faster than anyone in history. Could it be that his talking points have become so commonplace, no one even questions them anymore? Rather, we ask him questions like the one from an audience member tonight: ‘Why do you want to be president?'”

In the wake of Donald Trump’s resounding victory in the GOP’s South Carolina primary last night, and with Rubio and Cruz continuing their battle for second place, Trump’s momentum is gaining freight train status. Last night’s victory — a southern victory no less — was a dramatic wake-up call for those who had, until now, refused to take Trump seriously. Donald Trump’s political rise has not only led to the collapse of the Overton Window — it has also opened a dangerous new era in American politics.

A century or so ago — roughly the same time as the emergence of Hollywood — society moved away from a culture of character to a culture of personality. Suddenly our world had became obsessed with fame, the personality of others, and how our own personalities were seen in return. Fast forward to 2016 and the minds of America’s political right are now hijacked by a Frankenstein-like reality television star who has cursed his way to the top, and threatens to curse us all with his ego and his volatile, irrational mind.

“Critically, the Overton Window was smashed not by a politician but by a very American hybrid of corporate/entertainment titan — a man rich and powerful enough to be immune to elite condemnation and famous enough to dominate the news media,” adds David French of National Review. “How many people can commandeer live television simply by picking up the phone and calling in? How many politicians can cause Twitter to detonate seemingly at will?”

From my count, Donald Trump’s unhinged and inflammatory rhetoric, along with his reprehensible beliefs, qualify him for at least ten of the fourteen characteristics of fascism. As Trump’s momentum continues, America’s polarization only deepens; and the shards of shattered Overton glass fall in his wake as the dignity of believers in the Constitution is cut to shreds. Glass, it seems, could very well trump paper. (Photo by Spencer Platt/Getty Images for TIME, glass image via JPY)