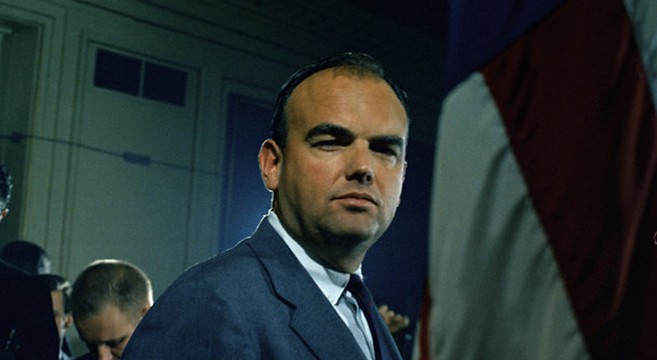 Top Nixon Aide Confesses A Bombshell: The War On Drugs Is A Big Scam To Suppress Blacks & Protestors

In Harper’s April 2016 edition entitled Legalize It All, writer Dan Baum has uncovered a bombshell quote from one of President Nixon’s top advisors. John Ehrlichman (above) was Nixon’s chief domestic advisor when Nixon unveiled the “War on Drugs” in 1971 to combat a public health crisis — as it turns out, however, it was all a sham and was secretly designed to suppress America’s black communities and the war protest movement coming out of San Francisco.

Ehrlichman was later implicated in the Watergate scandal and served 18 months in prison. In the Harper’s exposé, Dan Baum explains how he interviewed Ehrlichman in 1994 while doing research for a book on drug prohibition. It was during that interview that Ehrlichman revealed the real motivation behind the War on Drugs:

“The Nixon campaign in 1968, and the Nixon White House after that, had two enemies: the antiwar left and black people,” said Ehrlichman. “You understand what I’m saying? We knew we couldn’t make it illegal to be either against the war or black, but by getting the public to associate the hippies with marijuana and blacks with heroin, and then criminalizing both heavily, we could disrupt those communities. We could arrest their leaders, raid their homes, break up their meetings, and vilify them night after night on the evening news. Did we know we were lying about the drugs? Of course we did.”

You can read Harper’s bombshell report in full at Harpers.org. To understand why the War on Drugs is such an epic failure, one need only look at a few statistics: 1) when Portugal decriminalized drugs, and built a rehabilitation program to treat addicts, injecting drug use fell by 50%; 2) decades ago, Switzerland legalized heroin for addicts and no one has died from using legal heroin ever since; 3) a Harvard professor estimates the murder rate would fall by 25% in America if drugs were legalized, and 4) kids find it much easier to get their hands on illegal drugs than legal ones. You can read these and other mindblowing facts about the War on Drugs HERE.

The War on Drugs is an epic failure by having made things so much worse. For example: drugs are now purer and more powerful, it‬ has made the drug lords insanely rich, violence and murder rates have skyrocketed (25%-75% higher in the U.S. because of the War on Drugs), and it’s destroyed the lives and families of generations of innocent victims. Find out more by watching videos #1 and #2. But perhaps most importantly of all — 85% to 90% of people who use even heroin, crack or meth don’t become addicted, because it’s not the drug that causes the downward spiral. Addiction begins and ends with a psychological trauma that the victim has endured in his/her youth, which has not been resolved. To learn more about this you can watch videos #3 and #4. (Photo of John Ehrlichman by AP via Huffington Post)

SEE ALSO: Watch Police Officers & Judges Explain Why The Legalization Of All Drugs Is Essential To Our Future
SEE ALSO: Watch ‘The Economist’ Explain The Brilliant Things That Happened When Portugal Decriminalized Drugs
.