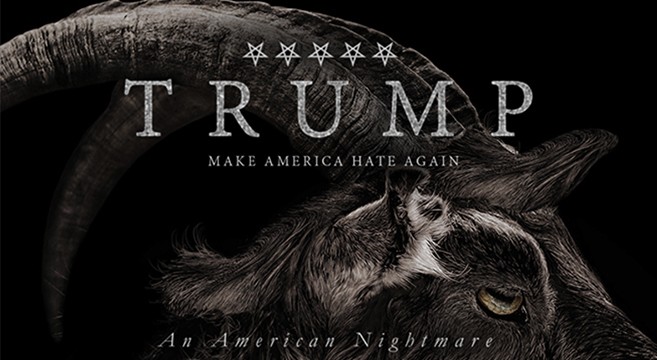 Through the prism of American history we find three intersecting forces that have shaped the country perhaps more than all others: politics, capitalism, and religion. And every four years as various candidates compete for control of the White House, these three forces dominate nearly every debate and conversation from coast to coast and around the world. Rough and tumble campaigns have been the norm since Washington was first formed, but the eyes of history will look back on 2016 as the year the race took its darkest turn. It’s no coincidence it will also be seen as the year the Republican Party died.

Regardless of who or what is responsible for his rise, the figurehead of the GOP’s death is none other than Donald Trump, the bombastic billionaire who somehow hijacked the Republican race and brought the Grand Old Party to its knees. But how and why did it happen? I found myself asking a similar question when I left the theatre after watching Sundance award-winning director Robert Egger’s new critically acclaimed horror, THE WITCH.

Set in 17th century New England, the film tells the story of William, his wife Katherine, their daughter Thomasin, son Caleb, and their fraternal twins, Mercy and Jonas, who emigrated to a puritan Christian plantation in America from their native England. When William is banished from the village due to the crime of “prideful conceit,” they set out into the wilderness where they start to rebuild their life. After months of close brushes with starvation and bitter cold the family finally begins to catch their breath again, only to be destroyed by an unrelenting wave of emotional darkness, obsession with Christianity, fear of the Devil, the dark forces at work in the forest, and a crippling sense of dread and terror. The film was based on firsthand accounts and historical documents of life during this time in early America.

Front and centre in this nightmare is the family’s goat, whom they call Black Phillip. As each member of the family loses their grip on reality, and each accuses the other of being the witch responsible for the devastation they are enduring, Black Phillip appears to be the one orchestrating the downward spiral. In a recent article for Slate, writer Jeffrey Bloomer goes back in time to learn why early North American settlers were so obsessed and terrified of witchcraft, and how the symbol of the goat as the devil incarnate came to be.

Bloomer asks, “So are there actual accounts of insidious goats terrorizing North American settlers? Why are goats linked to the occult, anyway? Is Black Phillip real? … I followed the history a bit more to England, where Eggers and several American scholars also pointed me. Malcolm Gaskill, a professor of early modern history at the University of East Anglia, confirmed that goats play a more prominent role in European witch imagery. ‘In European engravings and painting[s] that depict the witches’ sabbath — that is, the remote meetings where witches were supposed to gather to pay homage to Satan — the devil is often depicted as a goat or a goat-like man,’ he wrote.”

THE WITCH is very much a metaphor for early America — and sadly, for modern America as well. Is evil a self-fulfilling prophecy created by voices within society, or is evil its own independent force preying on innocent minds? Were the voices those children were hearing from Black Philip coming from inside their heads — or outside? Did that family’s destruction result from their own barking mad collective insanity, or is Black Phillip truly to blame? When 20% of Donald Trump’s supporters say they didn’t think African American slaves should have been freed after the Civil War — is that sentiment pre-existing, or is Trump directly to blame for the resurgence of such horrifying views? Either way you slice it, if THE WITCH is a metaphor for modern America, then Black Phillip is the ultimate metaphor for Donald Trump, and here’s why.

PERCEIVED INNOCENCE: For well over a year, the Republican base perceived Donald Trump as having a threat level equivalent to that of a harmless farm goat. Boy, were they wrong. In yesterday’s Super Tuesday, Trump dominated the results and he is all but certainly going to be the Republican candidate (barring some sort of brokered convention miracle). As Juan Cole writes in an op-ed published by Bill Moyers & Company, Trump should have been silenced immediately. “The notables have been shown to be useless. Donald Trump should have been kicked out of the Republican Party the moment he began talking about violating the Constitution. The first time he hinted about assaulting the journalists covering his rallies, he should have been shown the door. When he openly advocated torture (‘worse than waterboarding’), he should have been ushered away. When he began speaking of closing houses of worship, he should have been expelled. He has solemnly pledged to violate the First, Fourth and Eighth Amendments of the Constitution, at the least. If someone’s platform is unconstitutional, it boggles the mind that a major American party would put him or her up for president. How can he take the oath of office with a straight face? The party leaders were afraid he’d mount a third-party campaign. But who knows how that would have turned out? Someone with power needs to say that Trump is unacceptable and to define him out of respectable politics, the same way David Duke is treated (Trump routinely retweets Duke fellow-travellers).”

THE SHADOW VOICE: In the past, when Donald Trump hit the pulpit we had come to expect the same old barking mad ramblings of a “BAAAA-A-A-A-T shit crazy” goat. Those rambling are still there, of course, but in recent days we’ve also come to realize there is another form of “shadow” communication which Trump uses to embed his toxic and divisive rhetoric into the minds of his followers — the power of his vain image itself. In a commentary for Reuters entitled “How America Became The Love Child of Kim Kardashian and Donald Trump,” Lynn Stuart Parramore writes: “Kim Kardashian West and Donald J. Trump appear to represent a kind of capitalist abundance and freedom. What they really signify, however, is the imprisonment of the self and a future of further restricted possibilities. When our connections to each other fall away and our self-absorption intensifies, Americans’ chances to act collectively to redefine the terms of our lives diminishes. Trump’s loud talk of building walls and roughing up those who get in the way is really the whisper of an authoritarian future where the freedom and abundance are reserved for elites who will protect their privileges at any cost. The real wall will be around us — to keep us in our place. And we will have helped build our new reality.”

A BEAST FOR NO NATION: It’s become all to clear that Donald Trump will never be tamed. With each new vulgar outburst that comes off his tongue, we are reminded that this is a beast with no internal monologue. And the public’s outrage at his wild statements is much like a Chinese finger trap: the more we condemn him, the worse he gets. The more we whip him, the wilder he grows. Trump is fueled by his darkest impulses, and from what I can see, his brain appears to have five regions, each responsible for the five dimensions of his character and belief system: 1) racism and intolerance, 2) capitalism and greed, 3) he is drunk on American exceptionalism, 4) fundamentalism and fear, and 5) ego and narcissism.

In his op-ed for The New York Times entitled “The Governing Cancer of Our Time,” David Brooks writes, “People say that Trump is an unconventional candidate and that he represents a break from politics as usual. That’s not true. Trump is the culmination of the trends we have been seeing for the last 30 years: the desire for outsiders; the bashing style of rhetoric that makes conversation impossible; the decline of coherent political parties; the declining importance of policy; the tendency to fight cultural battles and identity wars through political means. Trump represents the path the founders rejected. There is a hint of violence undergirding his campaign. There is always a whiff, and sometimes more than a whiff, of ‘I’d like to punch him in the face.’ I printed out a Times list of the insults Trump has hurled on Twitter. The list took up 33 pages. Trump’s style is bashing and pummeling. Everyone who opposes or disagrees with him is an idiot, a moron or a loser. The implied promise of his campaign is that he will come to Washington and bully his way through. Trump’s supporters aren’t looking for a political process to address their needs. They are looking for a superhero. As the political scientist Matthew MacWilliams found, the one trait that best predicts whether you’re a Trump supporter is how high you score on tests that measure authoritarianism.”

Donald Trump’s rise is happening not because he is tapping into the highest ideals of the human condition. Like Black Phillip in THE WITCH, Donald Trump is feeding on the weak and the wounded.

(DISCLAIMER: This editorial in no way claims that Donald Trump is linked to, or sympathizes with, the practice of the occult or witchcraft.) 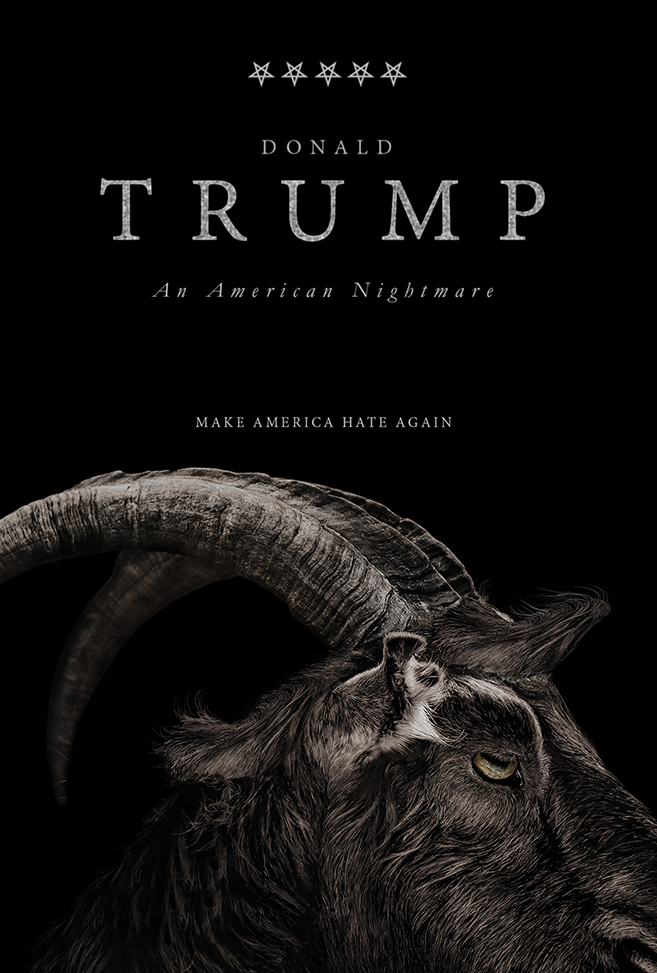 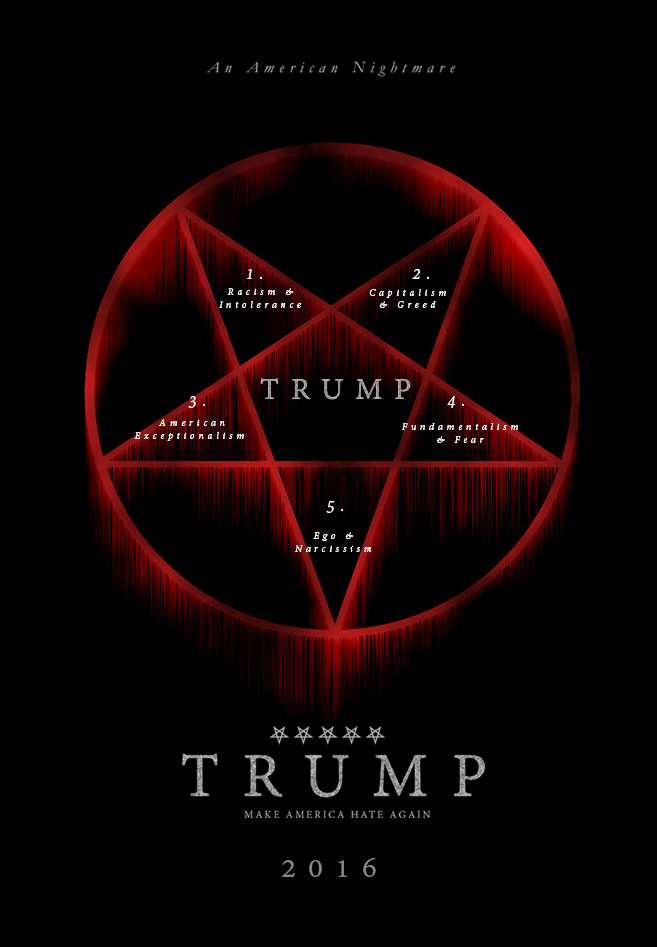 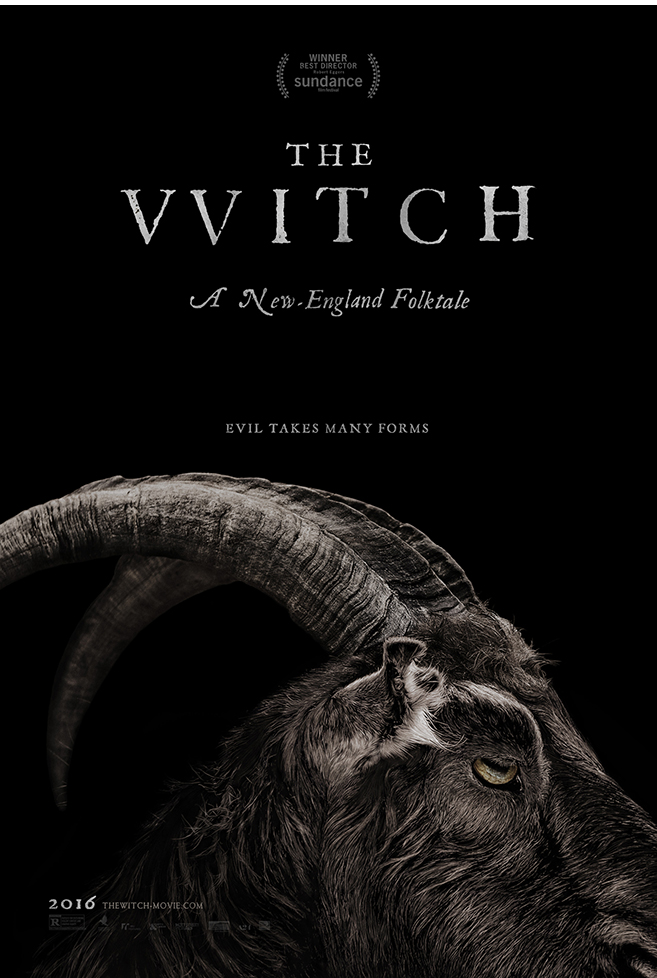