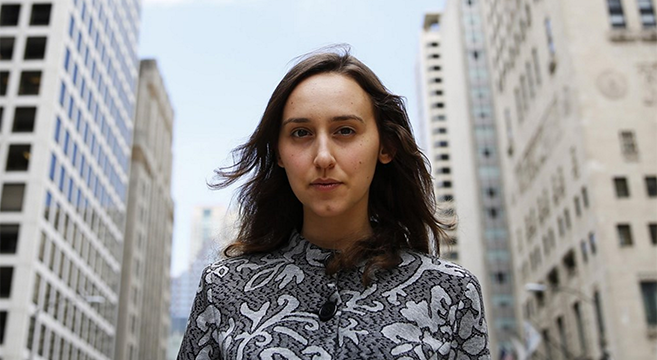 The WOW Files: NASA Believes This 22-Year-Old MIT & Harvard Physicist Is The Next Albert Einstein

At 14-years-old she presented MIT officials with a design for a single-engine plane and now at 22, Sabrina Pasterski is being hailed by NASA’s top astrophysicists as quite possibly the world’s next Albert Einstein. Pasterski, an MIT graduate and Harvard Ph.D. candidate, has been watched closely through the years by the brightest minds in the world of physics, and time and time again she has left her advisors and other leading figures in the field with their jaws on the floor.

So what exactly separates Pasterski from the rest of the crowd? She appears to be functioning at an equal level as Albert Einstein and Stephen Hawking were when they were 22 (unlike her peers). “She’s exploring some of the most challenging and complex issues in physics, much as Stephen Hawking and Albert Einstein (whose theory of relativity just turned 100 years old) did early in their careers,” writes Farah Halime of OZY.com. “Her research delves into black holes, the nature of gravity and spacetime. A particular focus is trying to better understand ‘quantum gravity,’ which seeks to explain the phenomenon of gravity within the context of quantum mechanics. Discoveries in that area could dramatically change our understanding of the workings of the universe.”

With hundreds of thousands of dollars in grants from the Hertz Foundation, the Smith Foundation and the National Science Foundation, Pasterski is well on her way to a remarkable career filled with discoveries. She almost certainly has her pick of positions at NASA and other top agencies, and Amazon chief Jeff Bezos is begging her to work for his aerospace developer and manufacturer Blue Origin. “This year, her second-ever paper was recommended as an editor’s suggestion in Physical Review Letters — her first was accepted by the Journal of High-Energy Physics within 24 hours of submission,” writes Forbes. “She was also the first woman to graduate at the top of her undergrad program in 20 years and flies planes in her spare time.” Although she has no Facebook, Linkedin, or Instagram (an admirable quality in its own right), she’s constantly updating her astonishingly impressive blog PhysicsGirl.com.

In related news, a radical new interpretation of Einstein’s Theory of Relativity has emerged from Canada’s Perimeter Institute for Theoretical Physics in Waterloo, Ontario, one of the world’s leading physics research institutes. NOVA writes: “Their latest offering is something called ‘shape dynamics.’ (If you’ve never heard of shape dynamics, that’s OK—neither have most physicists.) It could, of course, be a dead end, as most bold new ideas in physics are. Or it could be the next great revolution in our conception of the cosmos. Its supporters describe it as a new way of looking at gravity, although it could end up being quite a bit more than that. It appears to give a radical new picture of space and time—and of black holes in particular. It could even alter our view of what’s ‘real’ in the universe.” You can read the full story at NOVA. (Photo via OZY.com)

SEE ALSO: Einstein And The “OK Plateau”: The Trick To Getting Unstuck & Skyrocketing Your Potential
SEE ALSO: Read Einstein’s 1951 Letter On Why We Are Alive, Written To Someone Disillusioned About Life
SEE ALSO: Einstein: Happiness As An End Goal Is For “Swines”, Focus Instead On Truth, Goodness & Beauty
SEE ALSO: Meet The Astonishing Little Boy With An IQ Higher Than Albert Einstein & A Nobel Prize In His Future
SEE ALSO: “Einstein’s Cross” Gravitational Groundhog Day Is Causing A Supernova Explosion To Replay Many Times