When he was alive, Einstein predicted a Groundhog Day-like gravitational optical illusion nicknamed “Einstein’s Cross” in which light from a distant object, sitting directly behind another object with a massive gravitational field, will bend multiple curvy ways around the large object — thereby showing up in our eyes at different times. Einstein’s Cross is so difficult to observe successfully that some people had believed that it couldn’t be done with amateur instruments. Thanks to the Hubble Telescope, however, astronomers have found one of the most fascinating EC’s ever discovered — a supernova explosion which has so far been seen replayed by the Groundhog Day-like effect four times.

The New York Times writes: “The star exploded more than nine billion years ago on the other side of the universe, too far for even the Hubble to see without special help from the cosmos. In this case, however, light rays from the star have been bent and magnified by the gravity of an intervening cluster of galaxies so that multiple images of it appear. Four of them are arranged in a tight formation known as an Einstein Cross surrounding one of the galaxies in the cluster. Since each light ray follows a different path from the star to here, each image in the cross represents a slightly different moment in the supernova explosion.”

“Because of the galaxy cluster standing between this star and the Hubble, ‘basically, we got to see the supernova four times,’ Dr. Kelly said. And the explosion is expected to appear again in another part of the sky in the next 10 years. Timing the delays between its appearances, he explained, will allow astronomers to refine measurements of how fast the universe is expanding and to map the mysterious dark matter that supplies the bulk of the mass and gravitational oomph of the universe.”

The grid of 9 images below are infrared photos of the supernova. A supernova is a stellar explosion that briefly outshines an entire galaxy, radiating as much energy as the Sun or any ordinary star is expected to emit over its entire life span, before fading from view over several weeks or months. (Sources: Kottke, CNET; photos courtesy of ESA and NASA, and Science/Kelly et al.) 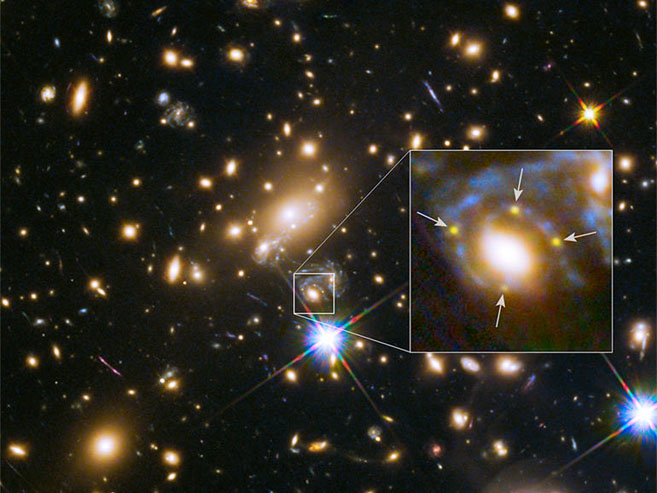