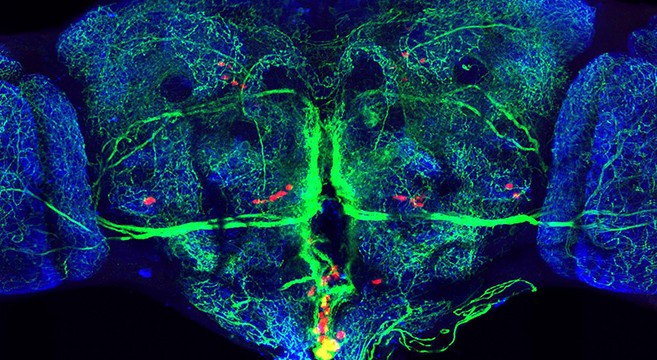 Deep behind each of your temples are two small arcs of brain tissue known as the amygdala. Whenever we encounter a situation that stimulates our fear response, the amygdala lights up like a firestorm. If the fear turns out to be unwarranted, our prefontal cortex (found just behind the forehead) steps in and works with the amygdala to erase the bad memory immediately. For decades, researchers have been trying to decipher what seemed like a paradox — victims of PTSD can have healthy amygdalas and prefontal cortices, yet for some reason they are unable to erase their traumatic memory. Now a remarkable new study from the National Institutes of Health has likely discovered the reason why.

Led by Andrew Holmes, the scientists used state-of-the-art optogenetics in their research — without which the discovery would almost certainly never have happened. Optogenetics is a technique in which brain neurons are genetically modified to be sensitized to light, allowing researchers to illuminate and zoom in on precise points of interest in the brain. With this process NIH researchers discovered the exact neuronal circuit linking the amygdala and the prefontal cortex. What they found was that by stimulating this A-PC circuit in mice who were conditioned to associate a specific sound with a very mild shock to the foot, the mice were able to fully erase the bad memory and overcome the fear (i.e. when the sound was played later without the shock they had zero anxiety). Mice, however, whose A-PC circuits were interrupted during the mild shocks, were unable to recover from the anxiety (i.e. when the sound was played later without the electric shock they were still afraid).

In neurobiology terms, mice whose A-PC circuits were stimulated were successfully able to reach “fear extinction” like a normal, healthy brain should. The discovery opens up a huge new door to possible cures for PTSD and anxiety — brain disorders that emerge from faulty A-PC circuits. The researchers also found that higher levels of A-PC stimulation correlated to higher levels of healthy fear extinction. Because the fear circuitry in the brains of rodents and humans is so similar, neuroscientists will now be able to focus their attention on ways to develop a unique range of treatments which stimulate the A-PC circuits in the brains of those who suffer from these and other related brain disorders so they are free to live happier lives with significantly stronger mental health. You can read the amazing study in full at the National Institutes of Health.

In related news, Cadie Thompson of Business Insider reports, “Researchers at Washington University in St. Louis have created a wireless device [the width of a human hair] that can be implanted in the brain and controlled with a remote control to deliver drugs … The technology could one day be used in humans to treat depression, pain, epilepsy and other neurological disorders … The implantable device works by delivering light or drugs to certain parts of the brain. By using targeted drugs that are only delivered to certain regions of the brain, side effects from drugs could potentially become much less severe.” Read more at BusinessInsider.com. (Image source: NBC News via the Allen Institute; source: Scientific American)

Previous post:
LINKguide (August 7, 2015) Next Post:
Artist Creates Stunning Stairway To Heaven Out Of Fireworks As Loving Tribute To His Grandmother