Documentary filmmaker Robert Kenner’s follow-up to FOOD, INC. is entitled Merchants Of Doubt, and it’s casting a strong light on the infuriating liars-for-hire spin doctor industry behind climate change denial, and a disturbing list of other public health and safety issues and environmental concerns. The film is based on the brilliant book of the same name, by authors Naomi Oreskes and Erik Conway, and early reviews from last year’s TIFF and NYFF give Kenner a big thumbs up for helping to expose “pundit corruption”.

CBS News writes: “The film points to the origins of this pundit class in the late 1950s, within the PR efforts of the tobacco companies, whose secret documents (revealed by whistleblowers or as evidence in lawsuits) detailed the playbook that a company peddling a hazardous product should follow to avoid financial ruin: cast doubt upon medical research (or even produce studies of your own); warn against the economic impacts in terms of job losses; rail against regulations as government overreach impinging upon people’s liberties (it doesn’t hurt to liberally throw the terms ‘Socialist’ or ‘Communist’ around); and make the culprit in any public health issue the consumer, as a matter of ‘personal responsibility.’ With the tobacco industry’s success in the 1960s at forestalling government regulations to ban smoking or to punish tobacco companies selling an addictive substance, other industries thought, ‘Hey, if it worked for them…’ And so trade groups and industry flacks began PR offenses to beat back changes in law. For flame retardants in furniture, a doctor testified before government committees about several babies he’d treated who’d been tragically burned in crib fires. The doctor later admitted to a reporter that he’d made it all up, but that (as a paid spokesperson for the chemical industry), he wanted to tell ’emotional’ stories that would convey the seriousness of the risks involved. Fred Singer, of the Heartland institute (a libertarian think tank funded in part by Exxon), is a well-known climate change denier who for years has called scientific evidence of a warming planet a lie. He proudly displays the publications his group produces that mimic actual scientific publications but which are meant to confuse Congressmen.”

You can watch the trailer for Merchants Of Doubt above. The documentary opens in North America on March 6, 2015. To learn more about the film, including links to petitions and other info, be sure to visit the film’s website at TakePart.com. 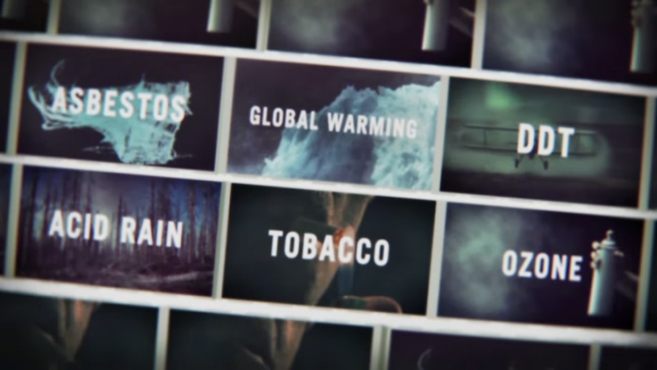