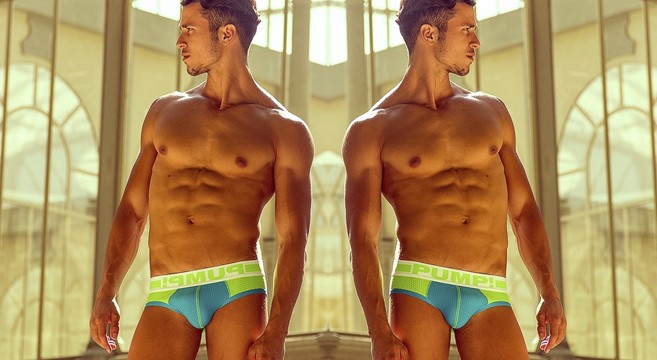 ☛ Gorgeous model & TV star Alejandro González photographed in Spain by Adrian C. Martin for PUMP underwear (OHLALAmag)
☛ Jamie Dornan looking hot as ever on the cover of GQ, tells the story of what happened when he researched S&M clubs (Dlisted)
☛ Jared Leto got way too hot on his desert hike so he took the opportunity to show off his 6-pack abs and fanny pack (Towleroad)
☛ Swiss power and automation tech company ABB show off their huge robotic LED screens at this year’s CES 2015 in Vegas (PSFK)
☛ Guess which TV star who gave birth 6 weeks ago just made 20 smoothies out of her placenta mixed with bananas (Just Jared)
☛ The Berry gathers 21 of their hunkiest uniform-wearing readers, but if I had to choose only two I’d pick #1 and #6 (The Berry)
☛ Check out the elegant and modern “SK Ranch” home nestled on a sprawling 120 acres in the Texas countryside (Interiorzine)
☛ Be sure to grab your download of Teen Daze’s brand new album A World Away featuring the track “Reykjavik” (Teen Daze)

Previous post:
When Lakes Go Kaboom: Watch This Scientific Explanation Of Why Lakes Can Suddenly Explode Next Post:
Enormous Study On Jealousy Uncovers The Impact Of Sexual vs. Emotional Infidelity For Men & Women