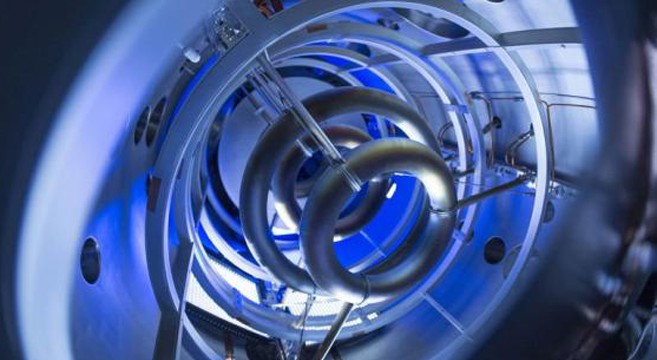 The news sent shockwaves around the world yesterday when Lockheed Martin revealed its groundbreaking nuclear fusion power source for the very first time.  The technology is such a game-changer it has the power to completely revolutionize every corner of civilization.  And that is no understatement.  The nuclear fusion device measures 7′ x 10′ and is small enough to fit on the back of a truck, which is 10-times smaller than current reactors.  Lockheed Martin plans to complete construction of the first reactor in less than a year, and build its first prototype in less than five years.  If all goes according to plan, these reactors will be in homes around the world in a decade.

The Guardian writes: ” ‘We can make a big difference on the energy front,’ McGuire said, noting Lockheed’s 60 years of research on nuclear fusion as a potential energy source that is safer and more efficient than current reactors based on nuclear fission.  Lockheed sees the project as part of a comprehensive approach to solving global energy and climate change problems.  Compact nuclear fusion would produce far less waste than coal-powered plants since it would use deuterium-tritium fuel, which can generate nearly 10 million times more energy than the same amount of fossil fuels.”  And just as impressive is the fact that the design would also completely eliminate radioactive waste.

You can read the full story by visiting TheGuardian.com, and by visiting LockheedMartin.com. For more information on the rise of green energy be sure to read: The Rise Of “Biosphere Valley”: How Germany Is Leading The Post-Carbon 3rd Industrial Revolution.  Advances in nuclear fusion technology are gaining serious momentum in recent years, and you can read more about these exciting developments by visiting NOVA.

Previous post:
The WTF Files: TODAY Show Analyzes The Creepy “Tingleheads” Videos Helping Folks With ASMR Next Post:
Video Essay Reads Between The Lines Of The Most Famous Scene In “The Silence Of The Lambs”