The Rise Of “Biosphere Valley”: How Germany Is Leading The Post-Carbon 3rd Industrial Revolution

Think we’re spinning our wheels in building a new green energy infrastructure for the planet?  THINK AGAIN.  When I first watched this interview with Jeremy Rifkin I got goosebumps from head to toe as he explained how Germany is turning the world’s hugely complex dreams of a green future into a hugely complex reality — and they’re doing it at record speed.  Jeremy Rifkin is president of The Foundation On Economic Trends and the bestselling author of nineteen books on the impact of scientific and technological changes on the economy, the workforce, society, and the environment. His books have been translated into more than thirty five languages and are used in hundreds of universities, corporations and government agencies around the world. His most recent books include:

I’ve been sitting on this interview between Jeremy Rifkin and Charlie Rose for a few weeks now, because I was looking for a way in which to frame it with the respect and importance it truly deserves.  This is NOT your average intellectual discussion after all — what you are about to hear in this 10-minute exchange is a mindblowing glimpse of what your future is about to look like.  And make no mistake: our world’s green energy infrastructure is coalescing very fast — remember it wasn’t that long ago when the internet was merely a dream written about in sci-fi novels.  I truly hope you watch the Rifkin-Rose interview in the link below, and follow it immediately with Jason Silva‘s most recent video below which has given me the “frame” I’ve been searching for over the past few weeks.  While Rifkin speaks of the hugely complex nitty-gritty involved in building the Third Industrial Revolution, Silva pulls back for a “god’s eye view” of how all the truly great technological innovations of our civilization have caught on like exponential wildfire.

Mr. Rifkin is the founder and president of The Foundation on Economic Trends in Bethesda, Maryland.  The Foundation examines the economic, environmental, social and cultural impacts of new technologies introduced into the global economy.  For more information be sure to visit the amazingness that is FOET.org.  Jason Silva is a filmmaker, philosopher, storyteller, and one of the world’s most influential futurists.  You can learn more about his work, watch his extraordinary collection of videos, and get links to all of his social networks by visiting his website ThisIsJasonSilva.com, and be sure to visit Jason Silva on FEELguide.  Ladies and gents, the future’s so green we’ve gotta wear shades.

YOU CAN WATCH CHARLIE ROSE’S INTERVIEW WITH JEREMY RIFKIN BY FAST FORWARDING TO THE 32:44 MARK. 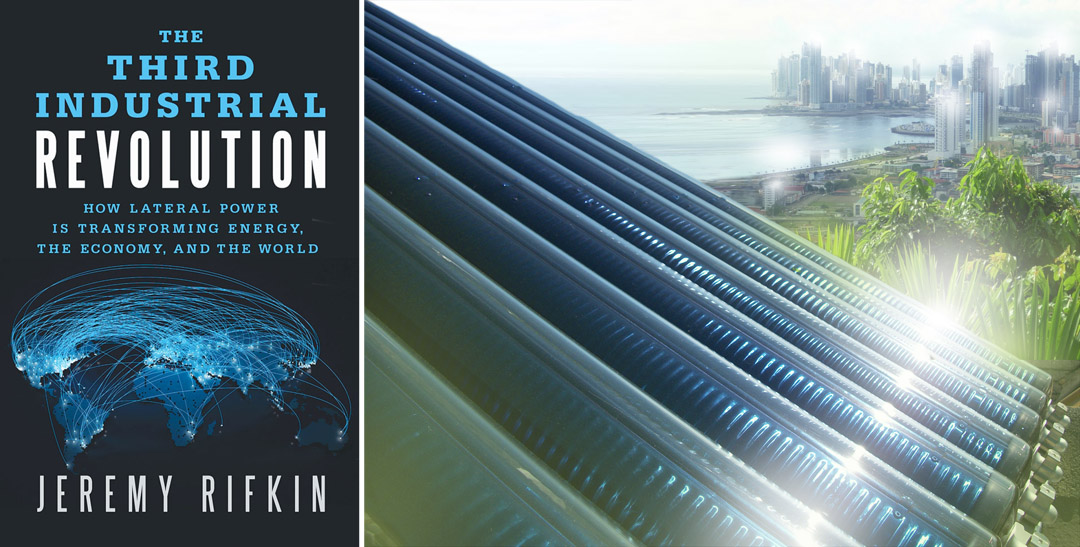 Previous post:
Falling In Love All Over Again With Wild Nothing’s Wildly Unforgettable “Vultures Like Lovers” Next Post:
1 Cliffside + 1 Black Cloak + Some VFX Work = The Most Beautiful Music Video Of The Month