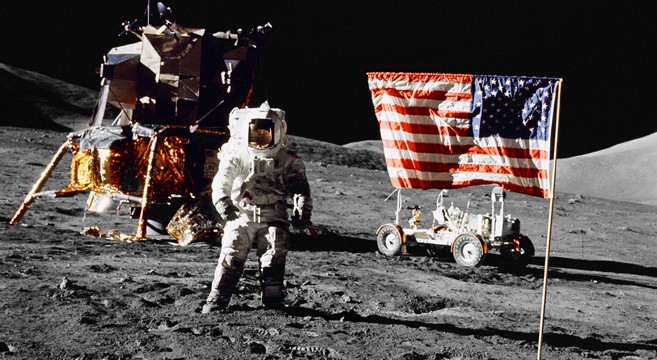 When astronauts began to land on the Moon in 1969, they each came back with a vivid memory of what the surface of the lifeless rock smells like.  Described as a “spent gunpowder” smell, or similar to hot fireplace ashes that have been doused with water, scientists now believe they’ve figured out where that distinct smell is coming from.  Columnist Leonard David explains: “Taylor said that when a geologist smashes a rock here on Earth, that person will smell some odor that has been generated by the smashing of minerals, thereby creating the so-called dangling bonds.  But on the Moon, the dangling bonds can exist for a long time, Taylor said.  And because lunar rock and soil is roughly 43-percent oxygen, most of these unsatisfied bonds are from oxygen.  ‘In a nut-shell, I believe that the astronauts all smelled unsatisfied dangling bonds on the lunar dust … which were readily satisfied in a second by the lunar module atmosphere, or nose membrane moisture,’ Taylor told Space.com.”  Astronaut Buzz Aldrin also made another very special observation during his trip to the Moon, and you can watch him explain below.