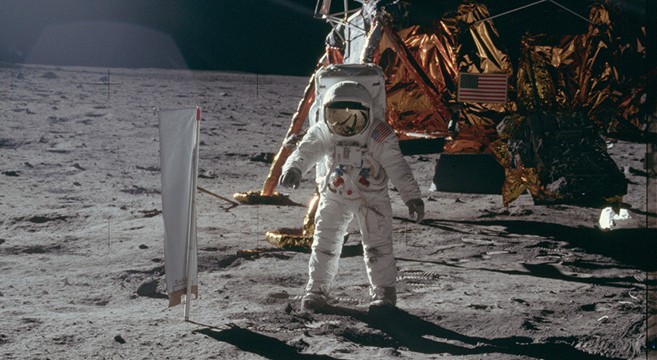 Imagine you’re an astronaut aboard the Apollo 10 mission to the Moon in 1969. As you and your team enter lunar orbit and pass around the dark side of the Moon, you realize you are going to lose all radio contact with mission control back in Houston for more than an hour. It’s already an unsettling experience in its own right, when all of the sudden you and your crew begin hearing what sounds like creepy alien music coming in through your headsets. That’s exactly the scenario that happened to the Apollo 10 crew in 1969. The documented true encounter was declassified by NASA in 2008, then digitized and posted online in 2012. This past weekend the strange story was profiled on the Science Channel series, NASA’s Unexplained Files, and the Internet pretty much exploded from reaction on social media. Here’s part of the transcript from the 1969 event, courtesy of CBS News:

“That music even sounds outer-spacey, doesn’t it?” asked Apollo 10 lunar module pilot Eugene Cernan, according to NASA’s official transcript of mission audio. “You hear that? That whistling sound?”

Command module pilot John Young then chimed in: “Did you hear that whistling sound, too?”

“I wonder what it is?” Young asked.

A few minutes later, Cernan added “Boy, that sure is weird music.”

“We’re going to have to find out about that,” Young said. “Nobody will believe us.”

“Yes. It’s a whistling, you know, like an outer-space-type thing.

Later, still on the back side of the moon, Cernan said “that eerie music is what’s bothering me. You know that…”

Cernan: “You know, that was funny. That’s just like something from outer space, really. Who’s going to believe it?

Young: “Nobody. Shall we tell them about it?”

Cernan: I don’t know. We ought to think about it some.”

You can watch the story from NASA’s Unexplained Files below, then watch CBS This Morning‘s full explanation of what really happened. The strange encounter also happened to Apollo 11 astronaut, Michael Collins, in the next mission to the Moon in 1969 (the first to actually land on the Moon). Collins detailed the story in his 1974 book, Carrying The Fire.

“Had I not been warned about it, it would have scared hell out of me,” he wrote. “Stafford’s Apollo 10 crew had first heard it, during their practice rendezvous around the moon. Alone on the back side, they were more than a little surprised to hear a noise that John Young in the command module and Stafford in the LM each denied making.”

When the Apollo 10 crew returned to Earth for debriefing with NASA, the crew “gingerly mentioned it in their debriefing sessions, but fortunately the radio technicians (rather than the UFO fans) had a ready explanation for it,” Collins wrote.

“It was interference between the LM’s and command module’s VHF radios. We had heard it yesterday when we turned our VHF radios on after separating our two vehicles, and Neil said that it ‘sounds like wind whipping around the trees.’ It stopped as soon as the LM got on the ground, and started up again just a short time ago. A strange noise in a strange place.”

But that wasn’t the only strange encounter Michael Collins and his team experienced on board the Apollo 11 mission in 1969. His crewmate, Buzz Aldrin, spotted a very strange sight in the vicinity of their spacecraft. You can watch Buzz Aldrin tell the story below as well. (Photo courtesy of NASA’s Apollo Archive on Flickr)
.

Previous post:
Rare Types of Crystals That You Probably Never Heard Of Next Post:
The WOW Files: Listen To This Woman’s Riveting True Story Of The Couple Next Door With No Curtains