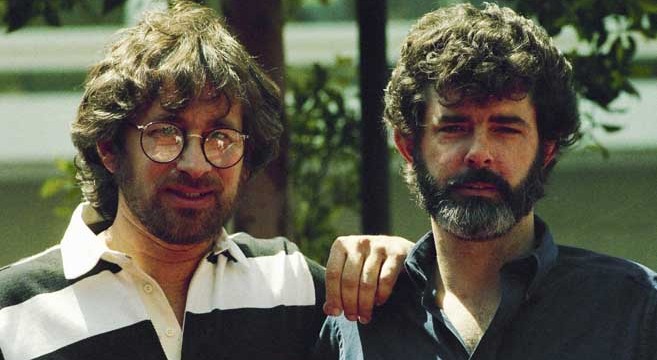 Back in 1977 when George Lucas was busy making his STAR WARS passion project, he became overwhelmed by the blown budget, the financial pressure, the feeling that the film had lost its way from his original vision, and that the whole thing was about to blow up in his face.  He needed to take a break, so he decided to visit his buddy Steven Spielberg in Mobile, Alabama where Spielberg was filming his own film, Close Encounters Of The Third Kind.  Lucas was absolutely floored by what he saw while visiting the Close Encounters set.  He confessed to Spielberg that he was envious of he saw happening on the Alabama set, and told Steven that — judging from what he had just seen — that Close Encounters would be light years more successful than STAR WARS would ever be.  Spielberg disagreed, so the pair decided to make a bet — they each bet that the other’s film would be more successful than their own, and the director of the most successful film would pay 2.5% of their gross to the other.  The bet worked out extremely well for Spielberg, and you can find out what happened next by visiting BusinessInsider.com.  (Photo courtesy of AP/Wally Fong).