More than 3/4 of all salmon on our grocery store shelves is farmed.  But as 60 Minutes discovered in their exposé of British Columbia‘s salmon farming industry, there’s nothing convenient about the environmental catastrophe that the industry is about to unleash in the pristine waters of Canada’s west coast.  Rather than isolate this risky experiment to a closed-off water system, the numerous salmon farms along British Columbia’s coastline are immersed directly in the ocean.

Environmentalists have already issued a red-alert warning that these “farms” — better described as “feeding lots” — are breeding grounds for superbugs and deadly viruses that carry a 100% chance of wiping out the entire wild salmon population of Canada and Alaska in a rapid mass-extinction.  As 60 Minutes reports, that exact nightmare scenario has already happened in the salmon farms of Chile which witnessed a catastrophic die-off that happened literally overnight.  Even more ominous is the fact that the deadly virus that wiped out Chile’s salmon has already been detected in autopsies of dead wild salmon found washed up on shorelines near B.C.’s deadly salmon farms.

What’s more, scientists warn that farmed salmon is one of the single most dangerous foods you can possibly eat.  One single serving of farmed salmon contains massive amounts of arsenic, mercury, PCBs, DDT, dioxins, lead, industrial-strength fire retardant, and synthetic chemicals in their flesh and fat; with levels of these toxins measured at 9,000,000 times higher in the fish than in the surrounding water itself.  Researchers from the Harvard School of Public Health have proven that mothers who eat fish pass on these toxins to their babies, with these children shown to be slower to talk, walk, and develop fine motor skills.  Scientists have also discovered that people who consume more than 2 servings of farmed salmon per month show significantly higher difficulty at recalling information they learned 30 minutes prior.  When consumed, the toxins in farmed salmon behave like hormones, activating a vast number of diseases and illnesses such as cancer, infertility, a myriad of sexual problems, and beyond.  WARNING: SCIENTISTS WARN EATING ONE SERVING OF FARMED SALMON PER YEAR IS STILL TOO TOXIC FOR HUMAN CONSUMPTION.

To learn more about the threat and devastating consequences of farmed salmon you can visit the website of Alexandra Morton, the environmentalist profiled in the 60 Minutes report, as well as visit Morton’s newsfeed of all global stories related to the fight against farmed salmon by CLICKING HERE.  You can also learn more about the fight to save B.C.’s salmon by watching the documentary Salmon Confidential below, and by visiting SalmonConfidential.ca, as well as the Department Of Wild Salmon.  To protest the B.C. salmon farming industry you can sign Morton’s petition at Change.org, as well as the petition at SalmonFeedlotBoycott.com.  You can also email the Premier of British Columbia at premier@gov.bc.ca. 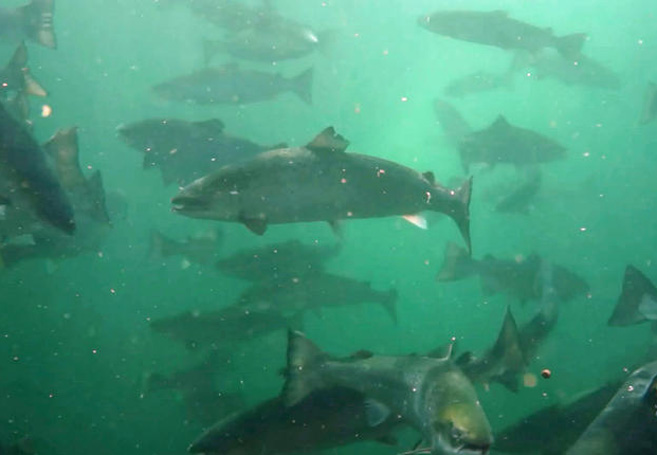 Previous post:
Executive Producer Of “Long Island Medium” Discusses The Laughter & Tears Behind The Camera Next Post:
Critics Rave “X-MEN: Days Of Future Past” Is ★★★★★ Gold, One Of Greatest Superhero Films Of All Time