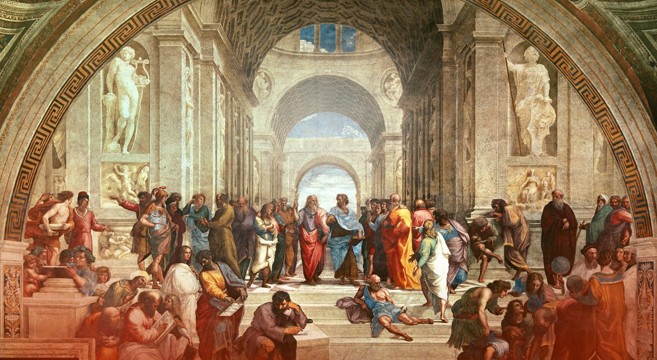 What is the role of philosophy in 2014?  And how would the godfather of philosophy have navigated his way through our contemporary world?  These are the questions at the heart of acclaimed philosopher and novelist Rebecca Newberger Goldstein‘s brand new book Plato at the Googleplex: Why Philosophy Won’t Go Away.  Amazon describes the book as follows: “Is philosophy obsolete? Are the ancient questions still relevant in the age of cosmology and neuroscience, not to mention crowd-sourcing and cable news?  The acclaimed philosopher and novelist Rebecca Newberger Goldstein provides a dazzlingly original plunge into the drama of philosophy, revealing its hidden role in today’s debates on religion, morality, politics, and science.”

Amazon continues: “At the origin of Western philosophy stands Plato, who got about as much wrong as one would expect from a thinker who lived 2,400 years ago.  But Plato’s role in shaping philosophy was pivotal. On her way to considering the place of philosophy in our ongoing intellectual life, Goldstein tells a new story of its origin, re-envisioning the extraordinary culture that produced the man who produced philosophy.  But it is primarily the fate of philosophy that concerns her.  Is the discipline no more than a way of biding our time until the scientists arrive on the scene?  Have they already arrived?  Does philosophy itself ever make progress?  And if it does, why is so ancient a figure as Plato of any continuing relevance? ‘Plato at the Googleplex’ is Goldstein’s startling investigation of these conundra.  She interweaves her narrative with Plato’s own choice for bringing ideas to life — the dialogue.  Imagine that Plato came to life in the twenty-first century and embarked on a multicity speaking tour.  How would he handle the host of a cable news program who denies there can be morality without religion?  How would he mediate a debate between a Freudian psychoanalyst and a tiger mom on how to raise the perfect child?  How would he answer a neuroscientist who, about to scan Plato’s brain, argues that science has definitively answered the questions of free will and moral agency?  What would Plato make of Google, and of the idea that knowledge can be crowd-sourced rather than reasoned out by experts?  With a philosopher’s depth and a novelist’s imagination and wit, Goldstein probes the deepest issues confronting us by allowing us to eavesdrop on Plato as he takes on the modern world.”

In a recent interview with The Atlantic, Rebecca discusses how Plato would have reacted to a world dominated by social media as well as cinema and television: “He’d be very alarmed. You can’t help but think immediately of his allegory of the cave in ‘The Republic’:  The lowest form of consciousness is that of prisoners in the dark staring at images.  He would be quite in despair.  He would think that we were enchanted by the lowest form of thinking.  To think is to be active; passivity is the death of the mind. But he wouldn’t oppose all of contemporary culture. Just this past week I started tweeting as Plato; I guess I’m not ready to stop impersonating him. And this kind of thing, the dialogue that happens on blogs and social media, I think he would be into it. I think he’d be intrigued by that aspect of popular culture: the verbal and the written exchanges.”

To find out what Plato would have thought about celebrity culture you can read the full interview by visiting TheAtlantic.com.  One of our world’s most high-profile living public intellectuals is Alain de Botton, who is the creative force behind a new philosophical take on celeb-obsessed media.  Alain is the brains behind the ingenious new website The Philosphers’ Mail, a news organization which uses celeb-oriented angles and headlines to draw the reader towards a deeper core truth.  You can listen to Alain’s recent CBC interview below, and visit the amazingness that is ThePhilosphersMail.com, as well as follow him on Facebook.  And after d0ing a little bit of research I discovered that Rebecca Newberger Goldstein is married to renowned cognitive scientist, experimental psychologist, and Harvard professor Steven Pinker.  You can learn more about Steven’s work by watching his recent appearance on Charlie Rose, and by visiting his home at StevenPinker.com.