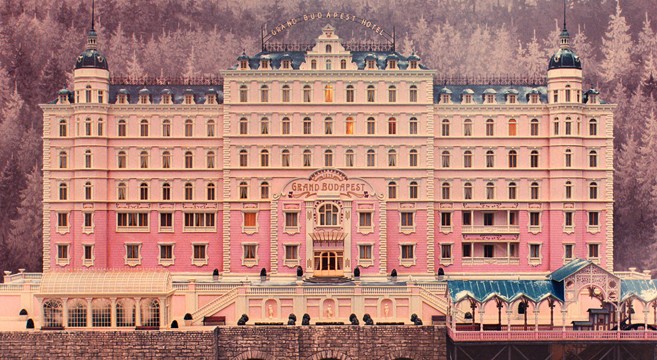 When Wes Anderson was scouting locations to film The Grand Budapest Hotel, he scoured the entirety of eastern Europe.  He and his team eventually chose to shoot the film in the German town of Görlitz near the border of Poland.  It was here where they discovered an abandoned German department store which was perfect for becoming the fictitious hotel’s main lobby and entrance.  Due to the fact that the building’s owners were crippled by bankruptcy proceedings, the film’s producers had to quickly broker a deal with local officials in order to lock the rights to the building.  Wes Anderson doesn’t like long prep times, so the designers and producers reacted quickly.  Luckily the department store was in such beautiful condition, the designers and decorators simply had to dust, polish, and add some furniture and drapes to get the department store ready for filming.  With a little help from the U.S. Library of Congress archive of photochrom images from 1895 to 1910, Anderson and his art department came up with a stunning and grandiose visual look for the film’s imaginary world.  To enter the magical world of The Grand Budapest Hotel be sure to visit AkademieZubrowka.com, and check out the following are 3 behind-the-scenes featurettes from the film.