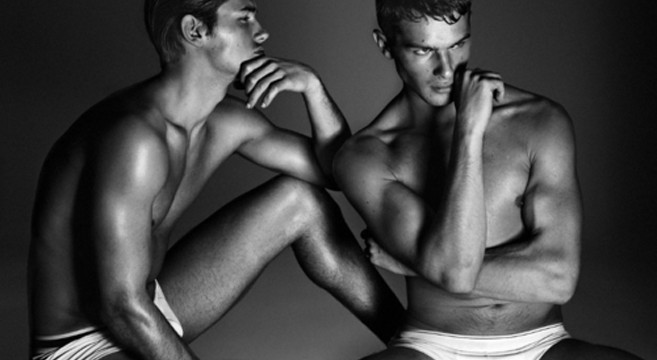 ☛ Models Paddy Mitchell and Vincent Friesicke featured in yummy new photos by Alvaro Bamud Cortes (OHLALAmag)
☛ Cameron Diaz explains to Chelsea Handler why it’s important for women to become best friends with their vaginas (Dlisted)
☛ This hilarious video of kids reacting to old-style rotary telephones will make you feel like an antique yourself (Towleroad)
☛ Google launches its fascinating Google Maps Gallery which overlays historical data onto its modern satellite maps (PSFK)
☛ Check out the creepy new Entertainment Weekly cover featuring Angelina Jolie as her Maleficent character (Just Jared)
☛ The Berry picks its newest cover boy in its ongoing Hot Men Of The Berry series, and yes — I would totally do him (The Berry)
☛ Wes Anderson is working on an ambitious, complicated, vaguely avant-garde new film with Roman Coppola (The Playlist)
☛ Everything you need to know about HOME ALONE’s new “Interstates And Stuff” from his new album (NO FEAR OF POP)

Previous post:
Stream DIGITS New Mixtape “Shake Your Body Down” And Check Out The Title Track’s New Video Next Post:
Dalai Lama To Give Opening Prayer In U.S. Senate On Thursday For First Time In History