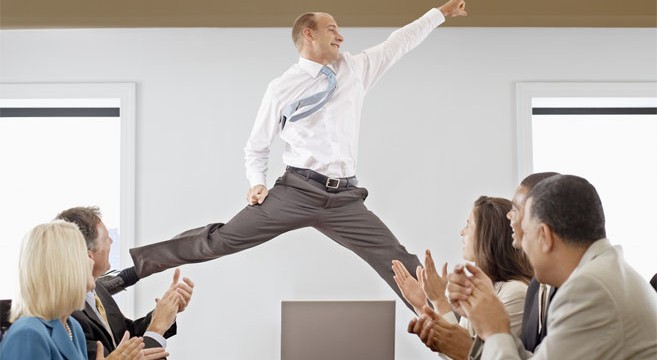 What makes a great boss?  How is it that some bosses make us feel awesome and empowered as we strive to go the extra mile, while other bosses can make their employees feel worthless and turn their days into painful experiences as they count every single second go by on the clock, anticipating nothing more than the end of the work day?

In his fascinating new book The G Quotient: Why Gay Executives Are Excelling as Leaders and What Every Manager Needs to Know, author and USC business-school professor Kirk Snyder spent five years studying American business executives in order to learn what factors separate the successful and effective leaders from the underperforming and weaker ones.  As Snyder began to compile his data, he discovered one remarkable commonality: Gay bosses embody a style of personalized attention that allows high-maintenance Gen Xers and Yers to maximize their performance. “Gay executives tend to look at how each individual brings unique abilities, and they see their job as figuring out how best to take advantage of those skills,” he tells DETAILS magazine.

“[Snyder] stumbled on some startling findings: Gay male bosses produce 35 to 60 percent higher levels of employee engagement, satisfaction, and morale than straight bosses.  This is no small achievement: According to human-resources consulting firm Towers Perrin, only a measly 14% of the global corporate workforce are fully engaged by their jobs.  And the Saratoga Institute, a group that measures the effectiveness of HR departments, found that in a study of 20,000 workers who had quit their jobs, the primary motivator for jumping ship was their supervisors’ behavior.  So what makes gay bosses different?  It may have to do with the way they survived high school. ‘Gay people are constantly having to dodge and weave and assess how and where they’re going as they grow up,’ says Snyder.  ‘And that manifests itself as three huge skills: adaptability, intuitive communications, and creative problem-solving.’  In other words, your boss is cool with your leaving a little early one day a week to pick up your kid from school, or happy to offer a learning experience that helps you close a crucial deal.”

Andy Towle of Towleroad writes of Snyder’s work: “The constant navigation of social cues in high school to avoid or confront discrimination taught many how to adapt intuitively and be resilient, while the coming out process cemented the security one has in knowing one’s self and thus largely don’t feel the need to be the cliche asshole boss to assert dominance over others.”  You can purchase your own copy of Kirk Snyder’s The G Quotient on Amazon.

If you’re unlucky enough to have an asshole boss you might want to consider reading this: “The Top 5 Tips On How To Stay Productive When You’re Surrounded By Assholes“.  One man who is transforming the world of business for the better is Dov Seidman.  His extraordinary company LRN is helping teach business leaders that the key to a successful company lies in the appreciation and execution of human values — both in the macro and micro sense.  Dov Seidman is also close friends with President Bill Clinton, and Dov was the leading inspiration for President Clinton to create the Clinton Global Initiative which is helping make our world a better place every single day.  To learn more about Dov Seidman you can read: “Dov Seidman Is Blowing My Mind: “HOW” One Man Is Redirecting The Moral Compass Of The Modern World“.