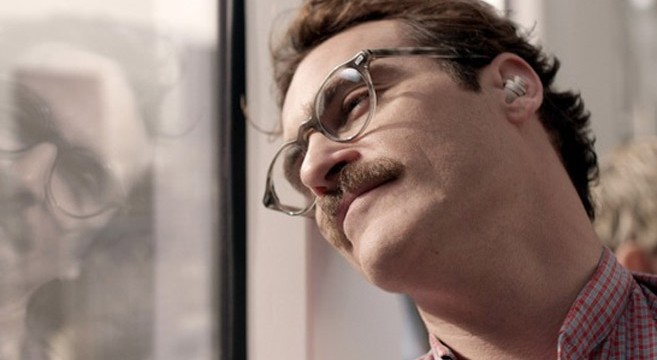 Ghost In The Machine: The Powerful Questions Of Love & The Nature Of Reality In Spike Jonze’s “HER”

As Spike Jonze’s critically acclaimed new film HER continues to come out on top of a growing number of Best Of 2013 lists, the love story is also hailed as a staggering achievement as a moving exploration of some deeply philosophical questions involving technology and its implications on love in the modern world, as well as the nature of reality itself.  The work of Zen master and philosopher Alan Watts is woven elegantly into the film’s themes, with the following two quotations serving as a major indication of Jonze’s intent for the film, as pointed out by Christopher Orr of The Atlantic:

“For the vast majority of American families, what seems to be the real
point of life — what you rush home to get to — is to watch an electronic reproduction of life;
this purely passive contemplation of a twittering screen.”
-Alan Watts, ‘What Is Wrong With Our Culture’

“In the beginning there was only the Self, like a person alone; but the Self
had no delight as one alone has no delight. It desired another. It expanded to the form of male
and female in tight embrace and then fell into two parts.  She thought, “How can He have intercourse
with me, having produced me from Himself?”
-Alan Watts, ‘OM: The Sound of Hinduism’

Set in the Los Angeles of the slight future, HER follows Theodore Twombly (Joaquin Phoenix), a complex, soulful man who makes his living writing touching, personal letters for other people.  Heartbroken after the end of a long relationship, he becomes intrigued with a new, advanced operating system, which promises to be an intuitive entity in its own right, individual to each user.  Upon initiating it, he is delighted to meet “Samantha,” (voiced by Scarlett Johansson) a bright, female voice, who is insightful, sensitive and surprisingly funny.  As her needs and desires grow, in tandem with his own, their friendship deepens into an eventual love for each other.

To achieve the look of a Los Angeles of the future, Jonze filmed several of the exteriors in Shanghai in order to give Los Angeles more verticality.  He has also imbued the city with a soothing color palette of warm woods and soft pinks and blushes.  A distinctly retro, almost mid-century modern aesthetic anchors HER in a world that is filled with powerful new technologies, while at the same time being comfortably familiar.

The visual style decisions are important, as they allow HER to explore some profound terrain with regards to how technology is completely rewiring our traditional notions of love.  In a glowing ✭✭✭✭✭ review of HER entitled “Why ‘HER’ Is The Best Movie Of The Year”, Christopher Orr of The Atlantic writes: ” ‘HER’ is a remarkably ingenious film but, more important, it is a film that transcends its own ingenuity to achieve something akin to wisdom.  By turns sad, funny, optimistic, and flat-out weird, it is a work of sincere and forceful humanism.  Like ‘Eternal Sunshine of the Spotless Mind’ — of which ‘HER’ is a clear descendant — Jonze’s film uses the tools of lightly scienced fiction to pose questions of genuine emotional and philosophical weight.  What makes love real: the lover, the loved one, or the means by which love is conveyed?  Need it be all three?  Yes, it is impossible for Theodore to have any clue what’s going on in Samantha’s ‘mind.’  But how, the film asks from several interlocking vantage points, does that make their relationship different from any other?  When Theodore confesses to the Adams character (also named ‘Amy’) that he and Samantha have been having amazing sex, ‘unless she’s been faking it,’ Adams tartly cuts to the chase: ‘I think everyone you have sex with is probably faking it.’  Indeed, by the end of the film, the central question Jonze is asking seems no longer even to be whether machines might one day be capable of love.  Rather, his film has moved beyond that question to ask one larger still: whether machines might one day be more capable of love — in an Eastern philosophy, higher consciousness, Alan Wattsian way — than the human beings who created them.”

For Peg Strepp of Psychology Today, HER is a much more pessimistic story: “And yet, much in the movie suggests that Jonze is acutely aware that for all of the connection technology seems to offer, it has the potential to increase whatever existential loneliness people suffer.  His hero is no prince among men, even if he does remind you of someone you might know.  And for all that Theodore is praised by others for his sensitivity, he is also profoundly walled-off.  He’s blown the one real relationship he had, that with his wife — revealed in flashbacks — but he worries most that he’s already felt all he’s going to feel … It’s hard not to see ‘HER’ as a cautionary tale, reminding us that maybe all that the digital age has ushered in may not be as innocent or innocuous as it seems, despite our collective willingness to go along for the ride.  In the end, it may have you looking at how plugged in you really are.”

There is no shortage of discussion on how our new world of gadgetry and artificial intelligence is having a negative impact on our lives, but what about the positive benefits that can be reaped from this technology?  In an essay entitled “What ‘HER’ Gets Right About Technology And Love”, Caryn James of The Daily Beast writes: “And ironically enough, Theodore isn’t sitting around his computer so much after Samantha gets him out into the world. (She’s the OS as a good influence.)  In a lovely episode, the couple goes to an old-fashioned carnival where he closes his eyes and she directs his movements; he spins and twirls and laughs as if they’re on a great date.  A relationship seems to grow, and like any couple they begin to share their deepest hopes and fears.  Samantha says she fantasizes about having a body.  She mentions that when Theodore once told her she couldn’t possibly understand what she hasn’t experienced, he hurt her feelings.  Wait, she has feelings?  So she says.  She admits to wondering about herself:  ‘Are these feelings even real?  Or are they just programming?  And that really hurts.  Then I get angry at myself for feeling pain.’ “

The film has been described in both utopian and dystopian contexts.  The dystopian as mentioned above is counter-balanced largely in the hands of Amy Adams who plays Theodore’s most positive friend Amy.  Richard Corliss of TIME magazine writes: “Adams, for all her accomplishments (in Junebug, Doubt, Sunshine Cleaning, Julie & Julia, The Fighter, The Master, Trouble With the Curve and Man of Steel), somehow keeps surprising with the variety of her takes on young American womanhood.  Here she sports tousled hair and inhabits a role that might have suited Diane Keaton during her Woody Allen years.  (The film’s last scene, of two people sitting on a bench, quotes a similar shot of the 59th Street Bridge from the Allen-Keaton ‘Manhattan’.)  Handed what might be a cliché, Adams makes self-doubt intelligent and adorable.  She earns the right to speak the line that encapsulates this movie’s dogged optimism: ‘We’re only here briefly.  And while we’re here, I want to allow myself — joy.’ “