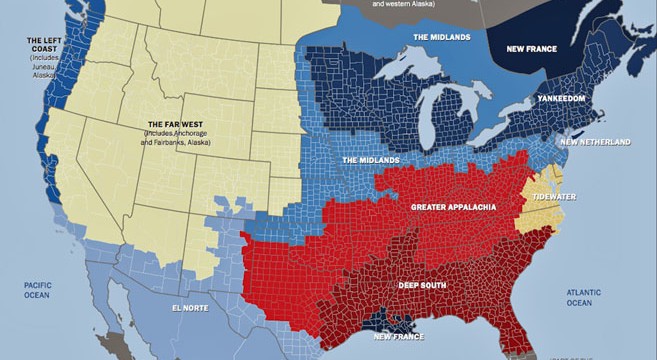 Having grown up in Canada’s white trash bible belt, The Ottawa Valley, I always thought my little part of the world was the only place in Canada where people listened to country music 24 hours a day, drove 4×4 pickup trucks filled with beer cans in the back, and where men would skip the birth of their first born child so they wouldn’t miss out on hunting season.  Then I watched a little movie called Fargo from the Coen Brothers and I had my “a-ha” moment when I realized those people in Fargo, North Dakota sound and act just like folks in my neck of the woods!  Regions with shared cultures in North America are not contained by borders in the slightest, and this is not unique to the midwest where my hillbilly people reign supreme.  There are similar regional zones all over North America, and Colin Woodard, a reporter at the Portland Press Herald and author of several books, says North America can be broken neatly into 11 separate nation-states, where dominant cultures explain our voting behaviors and attitudes toward everything from social issues to the role of government.  You can click on the map below to ZOOM IN, and learn more about the fascinating map by Tufts.edu and reading his interview with TheWashingtonPost.com.

SEE ALSO: The Mindblowing Interactive Map Of North American English Dialects
SEE ALSO: “Stand By Me” And The Timeless Beauty Of Oregon, The Ottawa Valley, And Small Town Life 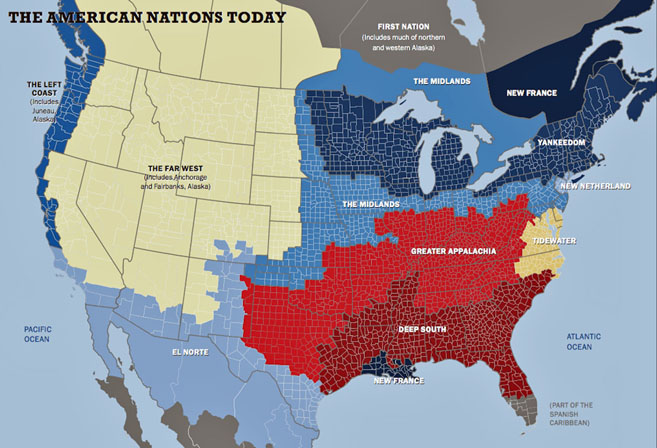